The Earth’s Moon has always been a mystical celestial body whose unseen paranormal forces affect a variety of supernatural creatures.  Werewolves being the number one entities under the Moon’s hypnotic spell. In the supernatural community, we give the most used names for the Full Moon of any given month. However, in some months various higher dimensional beings or metaphysical forces might be more dominant thereby causing a name change. Read More About The Paranormal Power Of The Moon | Click Here For 2022 Full Moons…

The Paranormal Names And Enchanted Effects Of The Full Metaphysical Moons

January – Wolf Moon – The name was originally derived from the large number of wolves roaming about while howling at the Moon in hunger. In reality they were howling in fear at the monstrous menace of the Werewolf! The enchanted energy of the Wolf Moon compels Werewolves to form into spontaneous temporary packs. This is unusual as most werewolves are low profile loners. Generally, organized packs are among those hereditary werewolves and those with control over transformation while maintaining a level of sentience in wolf form.

Wild werewolves gain the capacity to detect their own kind and send forth psychic signals for up to 100 miles! Once they come together they battle for Alpha, Beta, and Omega status. Normal wolves are hypnotized into joining the pack as support in the hunt for human prey. Thankfully, most of the time it is any animal that moves! The danger of these packs make the Wolf Moon the most paranormally perilous next to the Halloween Blood Moon of October! If the Full Moon falls on January 1st then it’s the New Years Moon. The Baby New Year and Spirit Of Christmas effectively nullify the Wolf Moon thereby canceling these new packs. There is still a werewolf threat but it is greatly decreased. In some cases, a residual harmless fluffy white Yule Moon werewolf might be seen in those freshly bitten and infected with the Lycanthrope Virus.

February – Ice Moon – Name comes from the ice-ridden nature of February which at times can seem like the heart of winter.  Also called the Snow Moon due to the abundance of snowfall.  Werewolves tend to be more active in colder winter weather regions under this Moon.  If it falls on Valentine’s Day then it’s the Valentine’s Moon effectively thawing the Ice Moon out. Read More…

March – Storm Moon –  Werewolves will tend to be more aggressive during March storms whether snow or rain.  However the luck of Saint Patrick’s Day helps protect humans from the Werewolf menace.  Falling on the 17th makes it Saint Patrick’s Moon, the Shamrock Moon,  the Leprechauns Moon, or the Lucky Moon.  In essence the luckiest Moon of the year! It may also be called this if it falls on The 7 Days Of Saint Patrick under the right conditions. If the Full Moon falls on the Spring Equinox then it’s the Spring Moon.

April – Pink Moon – Considered the second safest Moon of the year with the Yule being the first. The Pink Moon originally got its name from the first flowers of spring which are Pink Moss, Mountain Phlox, and Pink Phlox in some areas.  Flowers used in various mystical potions, and spells which may play a role in the Moon actually appearing pink in some places. Especially when it’s the first full Moon after the Spring Equinox. Angle of sunset, clouds, and air pollutants might cause a somewhat pink hue in some areas as well.  However the true deep pink color is magical in origin, and is caused by various practitioners of magic channeling the power of spring, and even the Spirit Of Easter which still hangs in the air of April thanks to the beloved Easter Bunny.  Anywhere near the world’s only known Werehare, aka Easter Bunny, or the Spirit Of Easter will also experience the full pink colored Moon without witches, warlocks, wizards, or sorcerers having a hand in it.  If the Full Moon falls within a week of Easter it’s the Egg Moon.  If on Easter Sunday then it’s the Easter Moon. Activity is extremely safe during these Moons with Easter being the safest.

This Moon has a calming effect on Werewolves courtesy of the Spirits Of Springs and Easter. The closer to Easter the more docile the Werewolves will be. Still one should exercise caution as these monsters can still be agitated. It’s not uncommon for them to attack ferocious forest animals like bears, wildcats and others that provoke them. As this Moon is usually exudes the enchanted energy of the worlds only Werehare it is known to be the ideal Moon for Werewolves to practice controlling their transformations. They will find resistance to the lunar energies is easier and some older Werewolves may not even transform.

May – Flower Moon – Name comes from the first flowers of Spring and the apex of floral abundance May brings courtesy of flowering trees. Werewolves may be attracted to flowers and actually stop to smell them for a bit until distracted by prey. Breathing in fresh floral scents may hold off werewolf transformation briefly after dusk.

June – Strawberry Moon/Honey Moon/Goddess Moon – Can have varying effects or no effect. Practitioners Of Magic perform grand ceremonies for the Summer Solstice that is the heart of life in whatever hemisphere Summer is taking place. It pays homage to all manner of Earthly Gods and Goddesses.  Especially the Goddess Gaia of the Earth.  All Moon Goddesses have great power during this month!  If the Full Moon falls on the Summer Solstice then it’s the Summer Moon firmly in the hands of the Summer Goddesses.

Most often in recent years it’s been called the Strawberry Moon. The sometimes red hued Moon, not to be mistaken for a Blood Moon, comes from Native Americans observing the short season of the strawberry harvest.  The Native American Goddess Athenesic (aka Awehai) has recently had power over the Moon in harmony with her fellow Goddesses. Athenesic is in fact the creator of the unique enchanted energies that mold the Strawberry Moon.  Athenesic is known to be a Goddess who encourages cooperation, and good will among the Gods.  Strawberry Fairies, and Fruit Nymphs strongly supported her claim to the June Moon. When one is faced with a Werewolf threat during June, it is recommended to call upon these Nature Deities for help. Werewolves may be drawn to strawberries and even eat some but they will still demand human and animal flesh! Their life flourishes during the heart of Summer as well and unfortunately that life is monstrous!

Sometimes the June Moon becomes the Honey Moon under the power of Bee and Honey Goddesses. When that happens Werewolves may be drawn to bee hives and partake of honey. The Bees will inexplicably hover about the Werewolf and not sting them in anger! They will then follow the Werewolf around the rest of the night under a supernatural hypnosis that compels them to swarm potential victims thus making it easier for the Werewolf to eat them. When the Honey Moon occurs the nefarious Beatrice Queen Bee Of Hell gains a conduit to the lunar energy. Enough to cause the bees to temporarily transform into carnivorous supernatural killer bees when the Full Moons light is unimpeded by clouds and is at 100% of Full. Every so often Beatrice herself gains complete control for a truly horrifying Honey Moon. Her hellish brand of Killer Bees endure until the Moon is at 75% of Full! She will rise from the Underworld during this time and wreak havoc with her personal paranormal bees including some monstrous huge ones! Her goal is to bring about the Bee Apocalypse!

July – Lightning Moon – No unusual effects for Werewolves under normal conditions.  However during lightning storms some who get struck by lightning can develop temporary electrokinetic properties. Various Gods and Goddesses of Thunder and Lightning control this Moon.

August – Corn Moon – The name is the Green Corn Moon indicating that the seasonal harvest is at hand. No Unusual Effects expect in some instances demonic forces compel Werewolves to create crop circles like that of the Harvest Moon. This Moon is often up for grabs in the higher dimensional community and can easily change to something else. In recent years it has reverted to being controlled by Lunar Goddesses thus making it the quintessential Full Moon.

September – Harvest Moon – The first full moon closest to the autumnal equinox causes werewolves to have more power due to the increased moonlight.  Although it doesn’t increase aggression all that much.  The harvest moon also causes them to leave the woods and prowl about farm fields.  Greater chance of running into a werewolf crossing roadways or through people’s backyards.  Much increased chance of contact with people which fuels their lust for blood and fresh meat. Werewolves being human in origin are naturally drawn to human meat.  The big bright harvest moon is often used by farmers to continue working into the night which places them in harm’s way as well.  If the Moon falls on the Autumnal Equinox then it’s the Autumn Moon. Sometimes called Pumpkin Moon when it has an orange hue. Demonic forces compel Werewolves to produce crop circles most often during this particular Moon. They are secret sinister messages to the supernatural community of darkness! All in preparation for the coming season of Halloween evil!

October – Blood Moon – The Blood Moon, or Sanguine Moon, is considered the most supernaturally dangerous Full Moon of the year due to the dark forces conjured up by Halloween.  It is also the Moon of Werewolf origin. The closer the Full Moon is to Halloween the more dangerous it is.  There is a general increase in all paranormal activity with heightened aggression.  Werewolves in particular become more ferocious than usual.  Also called the Hunters Moon due to the popularity of hunting during this time of both a normal and paranormal nature.  If it falls on Halloween then it’s the Halloween Blood Moon. If it appears orange it can be called Shala’s (Queen of Halloween) Moon or the Pumpkin Moon. It means she is locally applying the Spirit Of Halloween for the purposes of balancing the forces of good and evil. If it falls on Halloween it’s the Jack-O-Lantern Moon. It can even have a barely visible face on it for some. If you witness it you will have good luck for a very long time!

November – Dark Moon – The name derived from the first month of gloomy pre-winter darkness. No unusual effects on Werewolves. However, it may hold extra dark energy if closer to Halloween. Falling closer to Thanksgiving makes it less so thus decreasing the Werewolf threat.

December – Holy Yule Moon – Considered the safest Moon of the year thanks to the Spirit Of Christmas. This makes the light unusually holy in nature. In many cases, Werewolves won’t transform at all during the Yule Moon. The ones who do will be gentle cuddly fluffy white wolf puppies. This is a deep embarrassment for The Devil and all his minions! Evil paranormal activity is greatly decreased. When the Moon falls on the Winter Solstice it’s called the Winter Yule Moon, and Christmas it’s called the Christmas Yule Moon. If it falls on or near Saint Nicholas Day then it’s The Sainted Yule Moon. 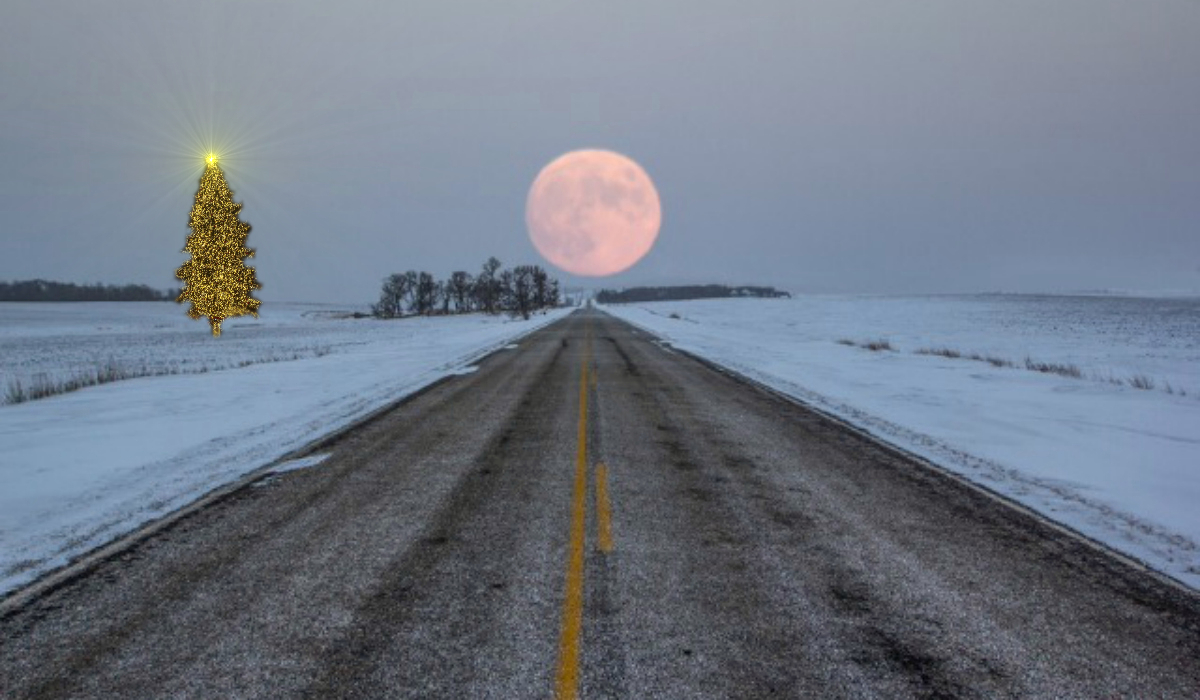 A Supermoon occurs when the Moon is considerably closer to Earth than usual. This is caused by the fact that the elliptical nature of the lunar orbit. The Sun’s gravity affects the orbit as well depending on the Moon’s position and its ideal alignment with it and the Earth. Supermoon’s cause extra aggressive werewolves who appear much more muscular and hulked out! Their power can increase two to threefold! Often Werewolf Repellents are somewhat less effective under the serious strain of lunar energies.

The Most Paranormally Potent Supermoons Of The 21st Century!

Links to our paranormal activity forecasts for each Moon and the werewolf outlook. We’re lucky enough to have three holy Moons for 2022!