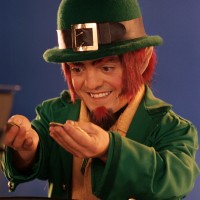 In the distant past some Angels began to take it upon themselves, many times in the face of Archangel disapproval, to claim aspects of the so called paranormal pagan world.  Thankfully the Saints who do this were once human, and therefore don’t have to obey upper Angel management if what they are doing is for the greater good of humankind. A bold preemptive move to thwart Earth God & Goddess power in the face of the future battles of Armageddon.  Two of which have already taken place.  Battles that culminate a War for paranormal power on Earth.  Mainly between the higher dimensional Angel, Earthly God, and Demon factions.  The Saint Patrick is one such Angel who become the Patron Of the guardians of good luck on Earth.  The little Irish supernatural beings deriving from the Elf species.  The infamous Leprechauns of Ireland!

Patrick came into the picture Leprechauns only graced their charmed Emerald Isles, Great Britain, and some of Europe with their luck of the light.  However once Saint Patrick unified his Angelic powers with Leprechaun Luck things quickly went global causing Saint Patrick’s Day to be the holiday that marshals good luck on Earth.  In the same way Christmas marshals the general forces of good.

On these seven sainted days you should experience good luck if you truly believe in Leprechauns, Patrick, and the power of good luck.  You also need to spread you own good luck via the performance of good deeds for others.  An unexpected helping hand is always considered good luck, and will spawn further luck through the Butterfly Effect.  Leprechauns will be scouring the Earth spreading good fortune to those in need, and those deserving of it.   You also have the best opportunity to gain three good luck based wishes via capture of a Leprechauns pot of gold generally found at the end of a rainbow, or by capturing the little Lilliputian clad in green.  This act by itself will bring you a lifetime of general good luck.

The three wishes give you the opportunity to make specific requests but they’re merely based on good luck that will be imbued within you.  This means some wishes might take some time.  For instance if you want to be President Of The United States you’d have to allow time for the various lucky breaks to take place that would lead to that event happening.  It could take 10 years, or more.  It’s been rumored that President Barack Obama rose to the Presidency so quickly due to his dealings with a Leprechaun at some point in his past.

to keep, and then return the rest of the gold to the Leprechaun.  If you captured a Leprechaun then he will hand you the coin, and you must release him.  Failure to do these things will result in severe bad luck which includes the Leprechauns wrath!  It’s also important to show respect to the Leprechaun.  Especially if you’ve captured him.  Lack of respect toward a guardian of good luck can garner dark luck canceling out wishes, and any light luck present.  In addition if you ever lose the gold coin everything is neutralized, and canceled.  However you won’t suffer bad luck by mere gold coin loss.

Unfortunately all news isn’t happy go lucky in nature. Friday The 13th falls on the third day of this lucky week thereby encouraging an unusual infusion of bad luck marshaled by evil Leprechauns, aka Clurichauns!  Clurichauns do normally work to thwart Leprechauns, and spread their own special brand of diabolical dark luck. However Friday The 13th being so close to Saint Patrick’s Day is like granting them their own Anti-Saint-Patrick’s Holiday to marshal their bad luck around the world!