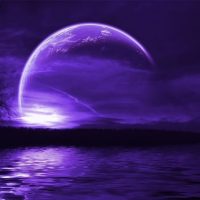 If you thought the Blood Moon Of Halloween was a supernatural nightmare of titanic terror then wait until you get a load of The Super Blue Blood Moon Eclipse in the early morning hours of January 31st! Before we say anything else we seriously recommend you stay locked securely indoors during the nighttime hours. All manner of unholy hell will be breaking loose!😮 The Super Moon causes major increases in metaphysical lunar energies thereby increasing paranormal activity both in strength and sheer numbers. The Blue Moon, the second full Moon in one month, has the same effect due to the mystical connection with the first Moon. They create a lunar loop that gives us double the paranormal power. So with two double powered Moons, that’s quadruple the trouble! Expect the most malevolence between the Witching and Devil’s Hours! Be aware that the power of this Moon is so great that it will still present danger even into the sunlit morning hours! Werewolves could still be present! For more information on the enchanting effects of the Blue Moon go here!

Unfortunately, The positive effects of the lunar eclipse are canceled by this. These include vampires temporarily becoming human and werewolves de-transforming to human form. Although that was never completely a positive thing as they still had their monstrous Werewolf persona. In addition, sometimes zombies have been known to freeze in position during a lunar eclipse for reasons not fully understood.

Of course, it is the crimson color of the lunar eclipse that gives it the Blood Moon moniker. Indeed an eclipse is a true blood Moon. Although be it only during that small period of time, unlike a full Blood Moon. A Blood Moon causes extra violent behavior in dark supernatural beings and also increases their power. So during the eclipse itself, we could say there might be Quintuple the metaphysical trouble in combo with the above mentioned Super Blue Moon.

The Violet Moon
We also the unique possibility of a Violet Moon. A rare paranormal phenomenon in areas where the supernatural forces actually make the Moon appear Blue. As the blood red eclipse hits the blue moon it will meld into a violet color. This brief Purple Moon is actually a positive thing. It is a holy light that gives good supernatural beings a major power boost along with turning anything with dark demonic DNA into ash. Even if it’s a being not normally affected by holy sunlight. This includes Werewolves and of course Vampires! There’s even a chance Zombies risen from their graves by dark magic could be destroyed as well! We’ve also seen evidence of exceptionally evil humans getting splitting headaches or worse! If you’re a good person then gaze into the soothing violet light to gain good luck and a healing effect!

History Of The Super Blue Blood Moon
There hasn’t been a Moon like this since 1866! Various supernatural journals and reports from that time indicate paranormal professionals had their hands full! Although they didn’t have our modern weaponry, they were tough as nails back then. Especially those who had just spent years fighting in the Civil War. And of course the further back you go in time the more practitioners of magic there are. They also seemed to have more knowledge of ancient magics. These factors brought the forces of darkness to heel despite the insane metaphysical madness of the Moon. A Moon we won’t see again until 2037!

Expect this Super Blue Blood Moon to be a supernatural issue until February 5th when the Moon is 69% of Full. Generally, 80% of full is the limit for metaphysical repercussions. Especially when it comes to Werewolf transformation. Thankfully we have no Full Moon in February so it should be smooth supernatural sailing until March 2018 when we get another Blue Moon! [Twitter]