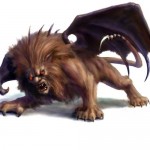 Just as the full moon brings us the deadly rage of the mindless Werewolf, so does the new moon bring us the threat of the mighty malicious monstrous man eating Manticore.  Although this threat happens far less often, and Manticore’s are far less in number than Werewolves.   Manticore’s are mainly lion like in form yet are twice as big as a lion, and thrice as ferocious.  They are a demonic animal hybrid with a monstrous humanoid like face with fire red glowing eyes.  They are quite intelligent which makes them even more dangerous, and they can in fact speak along with bellowing forth their menacing roar that makes a lions roar sound like a kitten purring.  Manticore’s also have dragons wings that allow them to fly for brief periods of time.  In addition they shoot forth fire from their mouth just like a dragon as well.  They have the tale of a Scorpion whose sting causes instant death in humans, and most paranormal beings as well.  They are indeed one of the most dangerous supernatural entities known to humankind.

These hell beasts were driven deep below the Earth into the Underworld by Greek Gods, and were watched over by Hades, the God of the Underworld who may or may not still exist.  The Underworld is a cavernous maze full of lava, and unholy fire pits which extends around most of the Earth at an extremely deep depth undetectable to humankind.  It’s the physical extension of the place in the 5th dimension, that some call hell, where non-corporeal demons reside.  Normally Manticore’s are confined to this hell on Earth, but every so often one finds it’s way to the surface, and escapes.  Since they are repelled by both the moon, and the sun, they only appear on a new moon.

Our global paranormal reporting network has confirmed a number of Manticore sightings.  Including a few here in the Continental United States.  The increased paranormal draw of Halloween may be partly responsible for the Manticore sightings.  Although we suspect some magic influence involved in their escape.  Ironically these hellish horrors are virtually immune to standard magic.  Generally only a seasoned Sorcerer can take on these titanic terrors.

We regret to inform you that if you spot one you’re already dead.  We aren’t even going to bother telling you to run, call paranormal professionals, or defend yourself.  It would be futile, and prolong the agony of your demise.  Unless your a Sorcerer, high level Wizard, or a being descended from Gods, or Angels then you’re simply done for.  Luckily they will perish in even 3% moon light so all you have to do is stay indoors, and lock the doors until the moon is at 3% full.  And yes you will be safe inside your home unless the Manticore has already targeted you outside.  The global curse that governs vampires, and prevents them from entering human dwellings partially applies to Manticore’s so you can sleep safely.  Those at the greatest risk are actually people in airplanes which attracts the flying fiends interest.  Also anyone roaming about wooded areas near exits of the Underworld are in grave danger as well.

Unfortunately there aren’t any Manticore hunters just as there are Werewolf hunters.  Manticore’s are nearly impossible to kill, and would easily eat a Werewolf for breakfast.  Of course the two rarely ever meet since Werewolves bask in the light of the full moon while the Manticore cowers away from the light.  We beg of you to simply stay indoors until the new moon has past, and the malevolent Manticore has burst into ash in the moonlight or is driven back to the Underworld where they belong.

I'm the President of Mystic Investigations. A private paranormal crime fighting organization out for supernatural justice in a world full of supernatural darkness.
View all posts by Xavier Remington →
This entry was posted in Hades, Manticores, New Moon, Underworld. Bookmark the permalink.