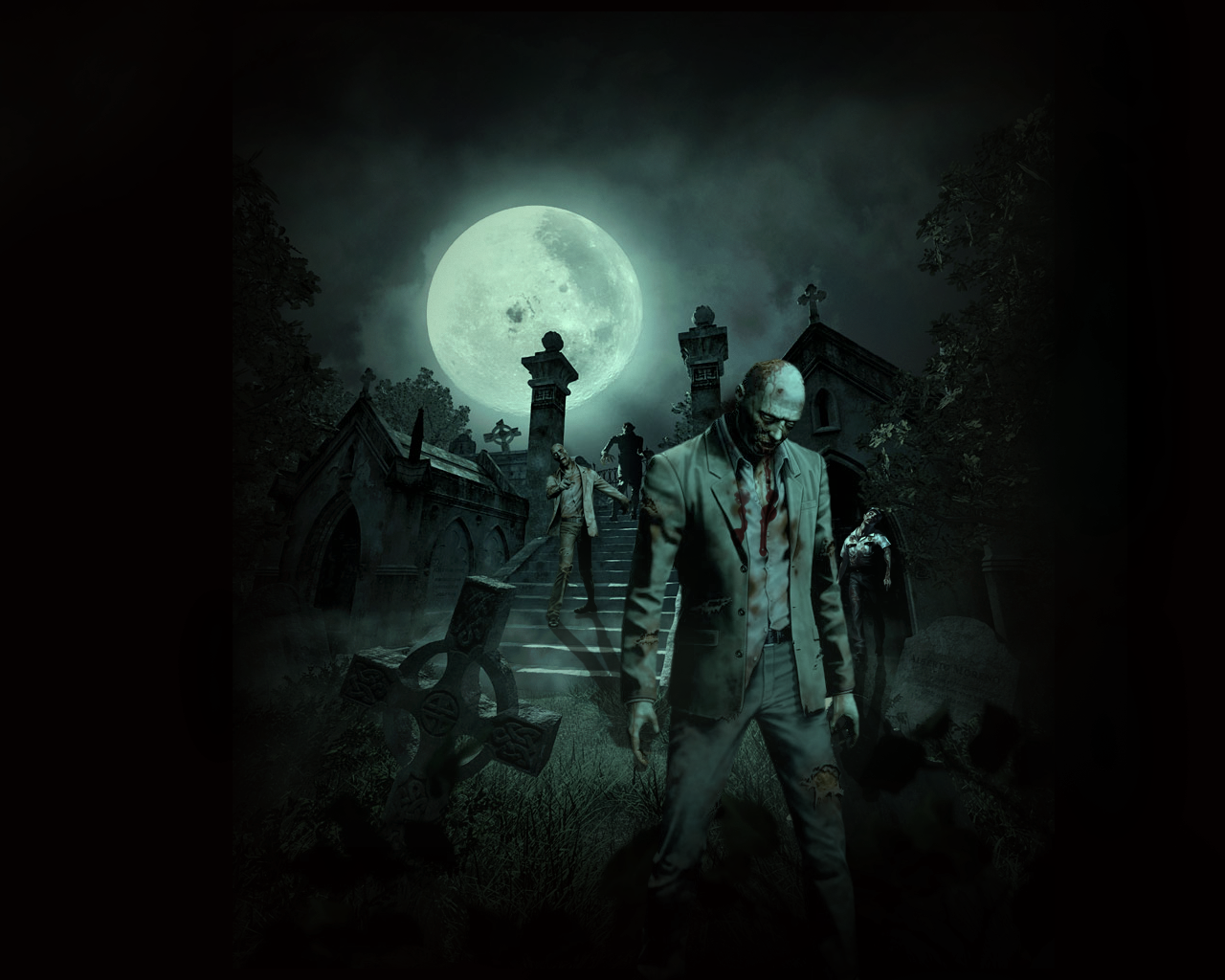 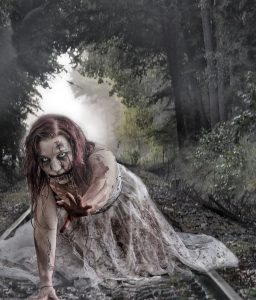 Zombies are former humans who have become members of the living dead courtesy of the notorious zombie virus! They are mindless cannibalistic killing machines without a human soul. Naturally this frees the former human soul that inhabited the body from any moral repercussions of the zombies murderous actions! Zombies are merely rotting human corpses with just an inkling of instinct to drive their horrifying existence onward. Like vampires they are composed out of a unique type of paranormal cancer like cell which is the main reason for their immortality, or rather their potential immortality since their flesh decays to nothing in a matter of years. In the case of zombies their cells are closer to actual human cancer which causes cellular necrosis. This makes their biological structures unstable as opposed to a vampire’s stable cell matrix.  Both supernatural beings are powered by a virus.  In the cases of vampires they require blood to quell the viruses negative effects while zombies require fresh human flesh!  The virus then rewards them with a surge of metaphysical energy when properly fueled.

The first known zombie, not counting sapient zombie ghosts, was created by accident in approximately 4129 BC when a new mystical embalming process was used on a prominent member of an ancient Sumerian village who was actually still alive! They didn’t have the medical knowledge to know he was actually in a deep coma falling near the edge of death. As the man died his body reacted with the unique set of magical ingredients backed by various spells which were intended to potentially resurrect him to an immortal life on Earth. Instead the enchanted embalming process induced Zombification, or the birth of the supernatural Zombie Virus virtually as we know it today.  Although this would be considered the Alpha Strain. A very powerful virus that spawned other strains of the zombie virus. The Alpha Strain now only accounts for less than 2% of zombification outbreaks.

The mystical morticians assumed the enchanted embalming experiment was a failure until the victim rose from his grave three days after burial. A t that point he looked pale as sheet, and dead as a door nail. He staggered about wildly making unholy groaning sounds with a crazed look in his glazed over eyes. The first true zombie proceeded to randomly cannibalize the community, and they were helpless to stop this seemingly unstoppable monster. As the first of his kind he was far more resistant to blunt force eradication methods than today’s zombies. This Alpha Zombie, sometimes called Zombie Zero, was eventually destroyed by the fiery torches of an angry mob which completely incinerated his walking dead corpse. Unfortunately he managed to bite several people which passed on the new zombie virus through his tainted saliva. This fast acting supernatural virus killed the living within minutes, and an hour later they rose forth as mindless monsters craving human flesh. This first Zombie Horde plagued the Earth causing mass chaos. We could have easily saw the first full scale Zombie Apocalypse that may have very well eradicated the human race! Thankfully the Sumerian God Anu stepped in, and did the humane thing. He sent bolts of fire from the sky to completely incinerate the entire village thereby containing the outbreak!  Well except for a few who staggered out into the desert. The ancestors of today’s zombies!

Zombification can happen to virtually any human. Although it’s estimated that 10% of the world population has some level of resistance, or complete immunity to various strains that have been created purposely, or evolved over the centuries. Only 1% are immune to all strains. This includes superhumans. Some strains acquired the ability to be passed on to animals thereby creating the first animal zombies. It’s thought an intermingling with the Rabies Virus was initially responsible for this atrocity. Later filthy fiends, such as the Sorcerer Dimitri Diablo, and the Plague Doctor, grew independent zombie strains for both humans, and animals insuring any living thing on Earth could become a Zombie. Even Plants! Although that’s only a threat for flora like the Venus Flytrap. Thankfully thus far there’s been virtually no plant, or animal to human transfer. Only the Rabies Strain makes humans temporarily sick before proper treatment fights it off. Otherwise simple death occurs without any zombified side effects. In addition only some human strains can transfer to animals yet animals can only infect others of their general species.

The main carrier of the zombie virus is saliva since biting is the main offensive move of a zombie. However one can contract the zombification viral infection

through contact with blood, rotting zombie tissues, and even prolonged exposure in a small space where zombies have decayed for quite some time. So the virus can be airborne but it’s harmless in the oxygen rich outdoors. Water supplies, such as wells, can become contaminated thereby passing the virus through drinking water. However large city supplies, and bodies of water should be safe even if a zombie dies within the murky depths. Zombies would technically be immortal if not for the slow decay of their rotting flesh. If no other being damages a zombie it will most likely live no longer than 3 years at the most assuming it eats no human flesh. A continuous supply of human flesh, with animal tissues to a lesser extent, slows down their decay considerably. Under the most ideal of circumstances zombies could live up to 7 years. The consuming of living flesh fuels the zombie virus making the walking dead more rabid, and powerful! Some who practice the dark arts create loyal immortal living dead servant drones through a magical stasis like state that halts the necrosis. These, and other Zombies can easily be put under the control of a powerful practitioner of magic due to the blank minds of the zombified ones. Such zombies can sometimes defy normal zombie behavior, and be even more unpredictable.

At present the majority of zombies are raised from their graves via the dark mystical arts that are based to some extent on the original zombie virus formula of 4129 BC. Very powerful individuals will engage in mass zombification of entire cemeteries. It seems raising one’s own army of the dead is a status symbol in the dark shadows of the supernatural community! In some cases a powerful individual with Necromancy powers may bring back the dead without spells, and potions. At that point the zombies existence is tied to that Necromancer which makes them more vulnerable.

If a living human contracts the zombie virus then they will die within hours. Entering a coma may happen before death depending on the strain. Within a day the human soul has left the dead body leaving only a bloodthirsty zombie. Often nobody even realizes they died since people think they’re merely taking a nap. The original Alpha Virus may work even faster. Those who were infected with the virus close to an unrelated death may take up to 3 days to rise from their graves depending on the zombie virus strain. The reasons for this are not completely understood. Another disturbing fact is that the embalming process used by funeral homes seems to only speed up the resurrection. The only guarantee of not getting a zombie is to destroy the brain or go for cremation!

Zombies lose all memories they had as a human, and have no link to the soul of their empty shell of a body. So a person is not liable in the Heavenly realms for any atrocities their zombie body commits after they die. The body runs on pure instinct which drives them to se

ek out live human flesh, and also draw together in hordes with fellow zombies to use numbers as a hunting tactic. Zombies will eat animals as well but it will fuel the zombie virus to a much lesser extent, and zombies usually aren’t quick enough to catch most animals. Zombies are about twice to thrice as strong as normal humans although their flesh can be easily damaged giving humans a distinct advantage. However a zombie will only die if you destroy the brain, behead them, or completely incinerate their bodies. Religious artifacts, such as holy water, will almost never work since they aren’t demon based like vampires or werewolves. However if a demon has a hand in a zombies existence then they can be vulnerable to such countermeasures. This is especially true if a dark practitioner of magic has imbued demonic energies into the resurrected corpses! Guns, sharp implements, fire, and even strong acids are the only way to go when dealing with the walking dead!

Zombies stagger about like a drunk or a baby just learning to walk. They usually move slowly but can walk very fast if they spot a human. Clearly running is one advantage over a zombie but their real danger is when they gather into groups called hordes. Their numbers can easily overwhelm a human or even a group of seasoned zombie hunters. Some strains such as the Alpha, or magically induced varieties, can allow for fast moving zombies. A distinct danger to humans, and animals alike. Not even a lion, or bear is safe from this type of zombie! If you spot a zombie please call your local zombie slayers or other paranormal professionals, to contain the problem. The government will generally laugh at you so dialing 911 would probably be futile.

The US government has been experimenting with the zombie virus since the 1920’s. There were plans to use it as a form of biological warfare in WW II Germany but it proved too dangerous to release. In later decades the Soviets, and Chinese have also been researching it’s uses in biowarfare. The supernatural virus has proved to be very hard for scientists to handle. However recent advances made in genetic engineering allow for a synthetic man made zombification virus. Thankfully the man made variety is much less potent, and contagious than the paranormal variety!

Naturally it would be rather easy to add a potent paranormal or man made virus to the water supplies across the nation. Such a blatant poisoning of the populace would cause the zombie virus to run rampant across the entire continental United States! This sinister virus could spread worldwide like wildfire to cause the dreaded zombie apocalypse. The secret agencies, within various governments, contemplating this release of the zombie virus have delayed action thus far. This is because of the very likely possibility of it wiping out the entire Earth’s human, and animal population thereby creating a zombie planet. However other supernatural beings would probably defend humankind against the common zombie menace.

Don’t Let The Next Zombie Apocalypse Catch You Off Guard! Get Survive2Thrive 40 Days & Nights 100% Organic Emergency Food Supply.  While the rest of the unfortunate panic stricken populace is foraging through garbage dodging the living dead menace you can be safely locked away in your basement stronghold with your precious food. And don’t forget to stock up on water as well.  Save plastic, and glass containers to fill with drinking water for storage in your zombie bunker! Find a safe natural source of spring water here.