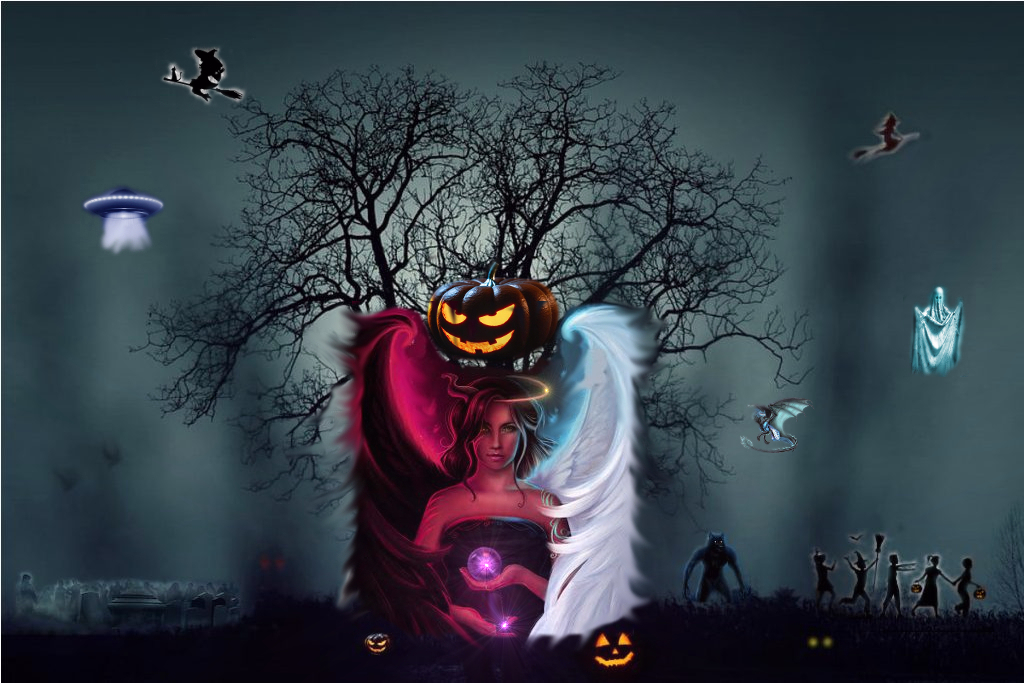 The Angel-Demon Hybrid Shala Revealed To Be Secretive Queen Of Halloween!

Many practitioners of magic, The Reality Recognition Guild, and others in the supernatural community felt a paranormal presence for countless Halloweens.  A sentient enchanted entity that acted as the conduit for the Spirit Of Halloween that equally channeled the powers of good, and evil to maintain balance in the world.  She remained hidden for centuries due to a metaphysical bounty on her head by both Angels and Demons who consider her a hybrid abomination.  However, on Halloween 2013, she made her first real public appearance during the First Battle Of Armageddon.  Many are calling her the most beautifully beguiling woman on Earth!  She is the Goddess Queen Of Halloween named Shala!🎃

She was last seen presiding over the trial of the Demi-Angel Santa Claus when Demons accused him of violating the Supernatural Secrecy Pact. An agreement to keep the paranormal world hidden from the world at large.  The Angels and Demons needed a neutral judge, and they reluctantly chose her. With a temporary stay on her bounty, she cautiously mediated the Claus Trial. Shala hoped this act of aid would end the insane paranormal price on her head. Unfortunately, they only used her conveniently for the trial and then went back to hunting her! Thankfully, while presiding as Judge she was able to completely hide her appearance, and mind from telepathic scrutiny through a variety of powerful spells just in case it was a trap.

Flash forward to October 2013 when the Spirit Of Halloween could barely be felt as she was captured for the first time in her life! A diabolical demonic commando team led by the Demi-Demon Anti-Claus managed to locate Shala’s mystically cloaked stronghold.  From past experience, we know the Anti-Claus has repeatedly tried to take over Halloween for his own dark purposes but has always failed. We can now confirm that her home is called Halloween Island which has no one location when it comes to Earthly geography.  The island is perpetually located inter-dimensionally out of phase with this reality in the realm between life, and death.  It has been seen as an elusive mirage by pirates, and sailors out at sea for many months. Only on Halloween does it materialize in a random physical location for 24 hours in order to channel the Spirit Of Halloween to ensure the balance between the forces of darkness, and light.

Halloween Island is full of perpetual iridescent autumn forests under dark twinkling starry skies bathed in the silvery light of a constant full Moon. Although, there are brief periods of ultra-colorful twilight.  Only on Halloween is there a completely sunny day highlighting the full brilliance of the fall foliage.  The weather of the island is calm and cool although there is usually a whistling wind causing leaves to flutter about gracefully.  The winds are stronger on the beach shores that look out onto the vast metaphysical seas of the dream plane most of the time. Almost hourly for a few minutes it visually phases into view, and only then can Earth’s oceans be seen.  The island is made up of a variety of small villages reflecting various time periods in Earth’s history. We learned that only recently a new village was built reflecting the 2000’s.

Within the wondrous world of the Halloween haven kids perpetually trick or treat with laughter, and delight as scary entities such as vampires, werewolves, and zombies playfully pretend to attack but never complete the act. The children are ghosts of the dead, and astral projections of sleeping children in their REM dream states.  The vast majority of the time children don’t even remember dreaming they were there.  Certainly, the supernatural beings and adults whose consciousness ends up there temporarily don’t remember as well.  It’s thought that those who eventually feel a sense of well-being after the death of a child instinctively know they are spending time with their son or daughter each night on Halloween Island in their dreams.  The island is a bridge between life and death mingling with the dream plane working to keep everything in balance.

It’s unknown how exactly the Anti-Claus and his malevolent minions managed to find the island. It’s suspected his brief banishment to the Underworld

allowed him to find a portal to enter the Halloween domain without being in a helpless non-lucid dream state under Shala’s control.  The Queen of Halloween walked among the gleeful trick-o-treaters and thought nothing of the Anti-Claus scaring everyone as he should have only been a harmless specter. Then to Shala’s shock, he grabbed a child and threatened to sink his Demidemon fangs into him.  His team members did the same to other kids as well.  Shala had no choice but to come quietly for such an act could have had horrific implications for ghosts, or those in a dream state as well. Despite the kids being astral projections they could have had considerable harm done to their souls and even their physical bodies for those lying asleep in bed! Certainly the Dream Master Freddy Krueger is known for this malice!

Shala being an Angel Demon Hybrid would be far more powerful than even a biological form Angel, or Demon.  Certainly, more powerful than a non-corporeal Angel since none have been able to find her for centuries.  Of course, it’s well known that the Omniverse God seeks balance as well so clearly, he hasn’t hunted her down in one second since our entire reality is in his mind.  He must have stopped his Archangels as well since they would be more powerful than Shala. They rule Heaven directly following God’s general laws. However, he does give them direct orders that usually involve neutral non-interference in various situations.

Unfortunately, the Devilish Dark Claus lucked out and found her hidden Halloween hideaway.  She was to be the sacrifice that opened the seal of Hell so the Devil could come to life on Earth.  Naturally, her spilled blood did aid in that after she was beheaded.  Thankfully she has self-resurrection powers, and her head popped back on.  The Devil also indicated he wanted to mate with her in an attempt to create the Anti-Christ who was to only be a Demi-Demon but in such a case would have been an unknown powerful 3/4 Demon 1/4 Angel Hybrid.  Although we would assume the Angel part would degrade to demon due to the Anti-Christs evil. In Shala’s case her angel and demon halves are in perfect balance as she personally lives a life reflecting a certain neutrality. If she went too far into the light or into the dark she could ascend to full Angel or degrade to a demon! Read About What Happened To Her At The First Battle Of Armageddon…

The Birth Of Queen Shala

Although we here at Mystic Investigations could not get to Shala personally, she spoke with us briefly in the astral plane which allowed us to write this article.  She didn’t want to give out her exact birthday for fear of time travelers destroying her.  Unfortunately, both her parents were blinked from existence for the supposed atrocity of procreating with the opposite supernatural species.  Her father was a Demon named Zamiphor, and her mother was an Angel named Fallasheena.  Both were on missions from Hell, and Heaven respectively when they came across each other.  A battle brewed at first but clearly, it quickly turned into something else.  Within days Shala was born in the quickest pregnancy in supernatural history. She was full grown within a year.  For several years all three were on the run from the forces of Heaven, and Hell tracking the mystical energy shock waves of forbidden love.  Then one fateful night she witnessed an unprecedented joint Angel-Demon coalition zap her parents into seemingly nothing.  Shala refused to act on her anger, and take revenge.  Her parents taught her that she would become a full demon if she did so, and she was unable to have 100% pure holy thoughts so she would not become full Angel.  Either transformation would greatly reduce her power and place her under the control of Hell or Heaven.  Shala instead blinded the Angels, and Demons with her awesome power, and disappeared never to be seen for centuries.

The Queen Of Halloween Shala is also referred to as the Goddess Of Halloween. This is despite the fact that she is far more powerful than any known Planetary Level Goddess. Except of course for Goddess Gaia Mother Earth who she shares a friendship with. Shala now dedicates herself to infusing just the right amount of peace into our chaotic world to bring about the perfect balance of metaphysical energy. Shala lives out a perpetual childhood of sorts on her island to make up for her lack of one.  That being due to the shortness of her time as a child, and always being a paranormal fugitive on the run.  She felt forces of ill will toward her coming so she cut the interview short. We asked if the Mystic Investigations Team might have the honor of coming to Halloween Island for Halloween 2014, and Shala said she’d think about it.  She is naturally very wary of physical visitors rather than ghostly, and astral in a harmless non-lucid state.  It wasn’t until Halloween 2016 that Shala and Santa joined forces for the betterment of humankind. They opened joint paranormal portals for Halloween and Christmas so the winter wonderland and the island of frightful fantasies could be bridged together. Although we were too busy fighting the forces of evil on Halloween we ended up finally visiting Halloween Island during our vacation to North Pole City in December 2016. Happy Halloween to all, and to all a seriously spooky night!👻