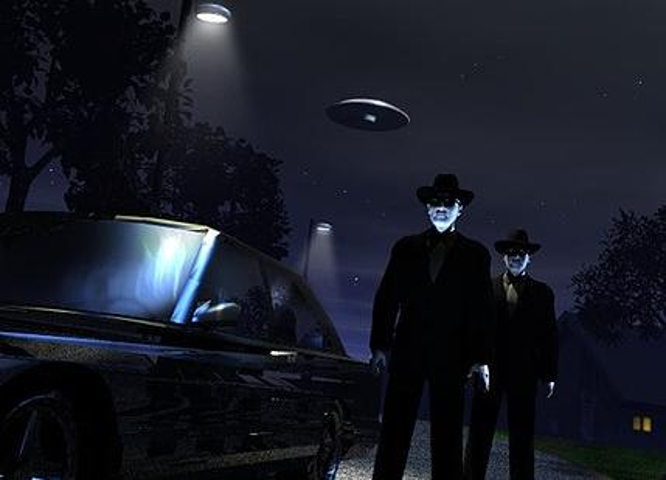 The United States Paranormal Defense Agency (USPDA or PDA) is a top secret black ops agency of the United States Department Of Defense that deals with supernatural beings and paranormal phenomenon. The PDA was founded in 1977 by President Jimmy Carter. Their world headquarters is a vast facility 500 feet under Washington DC with a secret tunnel leading directly to the White House and Congress as well. The advanced agency is responsible for the so called “Men In Black” who have spooked many an American citizen and sparked quite a few conspiracy theories in their paranormal investigations. They will often refuse to identify themselves, or do so without showing ID. Sometimes they will pose as members of other governmental agencies and then show legitimate ID that checks out in computer databases. Naturally, they almost always wear their trademark black suits and sunglasses unless they’re undercover. Some describe their skin as being unnaturally pale like that of the living dead with no evidence of any expression on their face. It’s plausible these agents could be human hybrids of supernatural beings along with deep brainwashing to keep them laser focused on their missions.

The Paranormal Defense Agency’s origins date back to the very formation of our nation in 1789. Although they can be traced even further to the colonization of North America by European settlers who had to deal with the supernatural scourges of vampires, werewolves, zombies, ghosts, and a plethora of other entities of evil. In the early days of the United States some secret supernatural societies were transformed into the first secretive Federal agencies. As the government grew so did the number of agencies that dealt with the many paranormal threats against the American people and the government in general. By the 20th century the government was no longer as transparent and such covert departments could grow more quickly without anyone noticing. Secrecy was essential to prevent mass panic. This conveniently allowed the government to not violate the Universal Law of the Supernatural Secrecy Pact. As the decades of the last century rolled by their missions became more about creating metaphysical weapons, possessing supernatural artifacts and genetically engineering an army of paranormal beings blindly loyal to the government!

Six core Federal agencies were folded into the Paranormal Defense Agency during its 1977 formation:

All the above agencies were unified into the Paranormal Defense Agency in 1977 under a secret restructuring plan masterminded by President Jimmy Carter. Some say his obsession with the supernatural led him to drop the Presidential ball causing one of the more embarrassing Presidencies of all time. Of course this stemmed from his own brush with UFO’s in 1969. If only the world knew that some of the blame for his stagflationary days of an ever loving sweet hellish malaise were due to him trying to protect us all from the supernatural scourges of the world. When President Ronald Reagan took the reigns of power he wasn’t surprised by the full extent of our paranormal planet. As a young man living in a rural community he had dealt with vampires and werewolves. He was even attacked by an Abominable Snowman while trying to save a man from drowning in an ice cold river! Amazingly enough, Santa Claus himself saved Ronald! As an Actor in Hollywood he came across power hungry vampires and other evil entities. As California Governor he was privy to the various supernatural events reported to him by the State agencies under his command.

President Reagan worked hard to strengthen the effectiveness of the PDA in the 1980’s. Many vampire nests, zombie uprisings, and werewolf attacks were thwarted under the Reagan Administration. However as the decades have passed the organization has become bogged down in bureaucratic red tape, paranoia over paranormal infiltration of the government, and a mad scientist mentality of tinkering with the supernatural to create unholy beasts, and crypto-biological warfare. Their central mission is no longer protecting the greater good against supernatural evil. It’s about protecting themselves and staking their claim on this paranormal planet as they jockey for global domination in the face of the great War Of Armageddon.

Due to the PDA becoming nefarious on a variety of levels, despite some good agents still among them, the fight against paranormal evil has fallen upon us in the private paranormal community. So in essence we’ve come full circle and have returned to the days of the 13 colonies. We here at Mystic Investigations have had some dealings with the PDA, and it’s usually never a good thing. However, our good friend and business colleague Lee Sampson, CEO of ZombieCorp, is a former PDA agent who left the government in disgust over in the ineffectiveness of the agency. We’re rather sure they have a branch here in our supernatural-laden community of Woodland Springs. We suspect it’s a small underground base in the Mystical Forest. The PDA are the ones who keep Woodland Springs off the maps and prevent people from coming here. When we’ve left town and returned we are often met with odd events, and various people trying to prevent us from re-entering. Thankfully we have a wonderful Sheriff who fights this idiocy! There’s also both good and evil supernatural entities that discourage large scale government inference in what is thought to be a paranormal haven. Hopefully, the PDA won’t quarantine our town someday. It would raise too much attention so the odds are in our favor. If you believe a PDA agent has approached you then contact us with the details of your encounter immediately!

The PDA has various restricted research areas around the country that include a joint Area with the US military called Area 51. This was the central location for alien research. Eventually, they moved to Area 99 due to all the media attention Area 51 gets. Paranormal Area Alpha refers to the administrative headquarters hidden below the Lincoln Memorial in Washington DC. Overall there are approximately 2000 Paranormal Area’s around the world. Some in cooperation with foreign governments and the equivalent of their PDA. The most infamous foreign one is Paranormal Area 48. It’s a top-secret former Nazi research site in Germany. Some say an advanced rocket was developed there that supposedly took Adolph Hitler and others into space. They allegedly entered a wormhole in near-Earth orbit created by German scientists by accident while testing an intercontinental energy weapon. We’ve written about Paranormal Area 842. Home of the Lancaster Homestead Pentalpha Poltergeist. There’s also Area 221 known as The Halloween Autumn Farm Village. Area 1111 is contaminated with radiation from time travel experiments.

The most common recruitment into the US PDA ranks is from within the government itself. Trusted people already in the system who will take any order in the name of national security. Often they come from the military, CIA, FBI, etc. Preferably with some experience with the paranormal world. If they are judged as extremely talented yet have no knowledge of the supernatural then that shocking revelation is made.  Usually by wheeling out a variety of caged monsters. If it’s too much for them to handle then they are free to return to their job but must adhere to a non-disclosure agreement they signed in advance of the opportunity to join the PDA. Sometimes they’re even paid some hush money as incentive to fight the urge to tell people about the horror they witnessed. Ultimately, they know death is the final option for those with loose lips!

Recruitment also takes place from those deemed as worthy and controllable in the supernatural community. Those with paranormal powers are often captured, micro-chipped, and forced to work for the government in order to maintain some level of freedom. Of course, if they serve more use as a research subject then they will surely spend the rest of their sorry days in lab cage! If they’re an immortal like a vampire then we’re talking one hell of a long time! In addition, there are rumors of alien hybrids raised in captivity who are brainwashed for government loyalty. These might be the more creepy Men In Black people speak of!

Unknown designations include a secret space station, Moonbase, and even a base recently added on Mars! Indeed, we’ve been there secretly for quite some time!