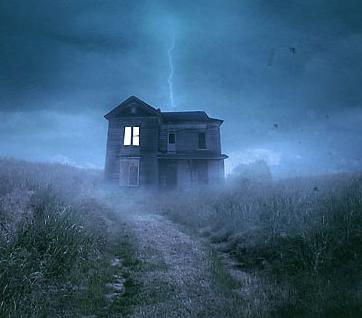 In the heart of deadly despair amid Depression & Dust Bowl Era America a grizzly event spawned the formation of a very rare, and complex paranormal entity known as a Pentalpha Poltergeist. The Pentalpha Poltergeist is a poltergeist composed of five entities who meld together as one malevolent spirit of vengeful violence who creates a metaphysical energy pentagon of paranormal power. The Lancaster Family saw generations of offspring live on their beautiful Kansas homestead since the mid-1800’s.  However, The Dust Bowl of the Dirty Thirties decimated the once never-ending seas of golden wheat.  The Lancaster’s had somehow managed to hold on despite The Great Depression destroying their status as the richest family in their community.  They had been forced to sell off so much of their vast farmlands but they kept the family home, and a great deal of land around it.

Their community had become a virtual ghost town by April 7th of 1938 when The Sinister Snuster hit with a vengeance!  A Snuster was a horrifying mix of flying dirt, and snow creating a diabolical dark blizzard. Hope of spring had been dashed as the Lancaster clan, consisting of Father Kenneth, Mother Judy, son Stanley, daughter Janice, and Granny Susan, were snowed in by a blizzard that blacked out the sun!  Despite being on the edge of starving most days the merciful family didn’t hesitate to welcome a lone drifter into their midst when his unexpected knock came at their door. He hacked horribly as he spat out cold soot, and was nearly frost bitten.  The Lancasters rushed to his aid and gave him what little food they had left.  Little did the family know that the drifter, named Flynn Mallory, had been watching them from afar for quite some time before he was unexpectedly caught in the Snuster Storm.  For you see Flynn was a demon worshiping serial killer looking for supernatural strength in a desolate depressed dust ridden world without hope.  The families isolated status made them easy prey.  On the night of April 8th, 1938 Flynn brutally murdered the Father Kenneth Lancaster in front of the rest of the family who were helpless to exit into the suffocating Snuster.  He proceeded to tie everyone up, and then monstrously ate Kenneth’s raw heart in front of their terrified eyes displaying the sheer shock of this surreal event.

Flynn then formed pentagram’s of blood on the floor, and walls while repeatedly chanting

unholy demonic gibberish as he wore a gold pentagram amulet around his neck.  He ended up killing the rest of the family one by one eating each of their hearts with a maniacal smile on his deranged face!  The heartless Mallory sat amid the pools of blood on the floor with crazed eyes repeatedly chanting, and painting callous crimson on his skin in the now silent house.  The corpses of the slain family were arranged along the points of the largest Sanguine Pentagram as the lights furiously flickered, brackish black goo spewed from the plumbing, and the house shook.  Flynn wildly chortled as he felt the approach of a Demon named Albanazzar.  He finally felt the end of his miserable existence as a simple human practicing mediocre magic while observing the blood on the walls defying gravity by inexplicably flowing upward toward the ceiling. He was now on the cusp of accepting the psychokinetic powers, and access to extra special magics he believed he seriously deserved.  The Devilish spirit of Albanazzar entered the house ready to lay the gift of enchanted evil at Flynn’s feet for being a loyal servant of darkness.  Suddenly an even darker force stepped in the demons metaphysical path.  It was the newly formed Pentalpha Poltergeist consisting of the entire Lancaster Family!

After Kenneth was killed his ghost watched helplessly in horror as his family was sacrificed to a dastardly demon.  Each member of his family was deeply traumatized by watching each other die and then dying themselves.  So they all became ghosts with vengeance deep in their hearts.  A vengeance that formed a dark spectral energy that bound their astral bodies together into one entity.  Ironically this rare occurrence was due to sanguine energies in Flynn’s blood pentagrams along with the alignment of five family members dying in the same manner in the same place together. The extremely powerful, and rare Pentalpha Poltergeist was born!  A supernatural being so powerful that it can actually scare a demon!  The demon naturally had so much pride in his dark heartless hell force that he still proceeded to fight the Poltergeist despite the fear he usually only felt when Angels were near.  However he quickly realized he was no match for the Pentalpha, and Albanazzar attempted to leave the Lancaster House.  Unfortunately for him the Lancaster Poltergeist immediately forcibly absorbed his evil essence thereby effectively blinking him from eternal existence.  With this demonic force melded into them, they became one of the most powerful poltergeists in the secret supernatural record!

nothing but the wind raging outside.  He screamed insanely with tears streaming down his pathetic face, “Lord Albanazzar don’t leave me! I did everything you commanded me to do!  Please come back!  Did I do something wrong!  Noooooooo!”  Then a smile came over his blood-splattered face as he felt a powerful psychic presence.  It was the Pentalpha.  His smirk quickly turned to a grimace of terror as Mallory was launched repeatedly across the room, and then dragged through the pools of blood by the metaphysical juggernaut. Amid the onslaught, screams and swears coming from the slain family echoed eerily off the sanguine stained walls. He huffed and puffed on his hands, and knees once the assault was seemingly over.  He muttered not so enchanting expletives under his breath as he crawled for the front door thinking he’d rather be out in the black blizzard then inside this hellishly haunted house.  The door was mystically sealed shut by the Poltergeist until Flynn lit it on fire burning a hole into it while reciting a magical incantation.  However, oddly enough the wood door stopped burning after creating a hole just large enough from him to crawl out of.

Flynn had his face out in the cold blinding blizzard when he realized he was at eye level with two growling dogs whose eyes were glowing red with poltergeist possessed anger.  They pounced on him with extreme prejudice, tearing him to shreds, and eating him alive by proxy for the Pentalpha. The wood in the door supernaturally sealed up making it appear good as new.  Now dead Flynn was a ghost facing the Lancaster Poltergeist who vowed to metaphysically torment him for all eternity.  The house that was to be his supernatural salvation became his unholy hell!

Tragically the Lancaster’s didn’t move on into the light of the Afterlife, and instead

transmuted into an entity of evil that makes even demons, and jinn head for the hills!  Over the decades there have been reports of blood-curdling screams coming from the house that have been amazingly heard miles away!  There are also sporadic stories of people entering the house of horrors, and becoming overwhelmed by murderous cannibalistic urges.  Most acted upon it, and now countless lost souls are trapped in the confines of this dark paranormal hot spot. Anyone who dies in the Lancaster House is damned to have their soul trapped there for all eternity! The last straw was an attempt by a developer to demolish the house.  His entire construction crew died through a series of bizarre incidents.

Not soon after that the US governments top secret Paranormal Defense Agency moved in to seal off the area, and scrub all records related to the house, and the Lancaster family clean.  It is now an area of secretive supernatural study known as Paranormal Area 842.  With the government unable to destroy the supernaturally indestructible house they now seek to unlock its secrets in the hopes of harnessing it into a paranormal weapon of some type! Will the Lancaster Family Poltergeist, and their innocent victims be damned for all eternity?  Will they ever find peace, and salvation in the Heavenly realms of the Afterlife?  May God have mercy on all their lost souls! 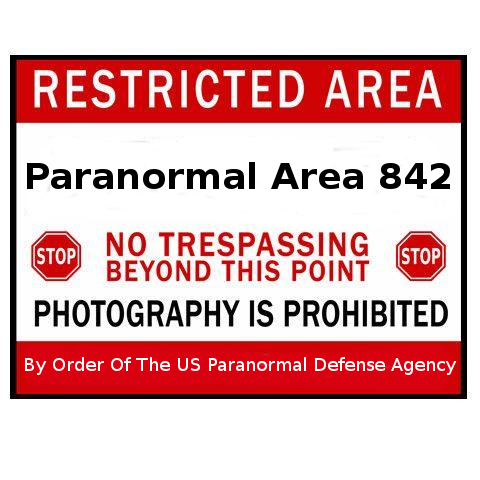