Something feels wrong about the Spirit Of Halloween this year.  At least within it’s good side since Halloween is a grey holiday that encompasses both the forces of light, and darkness.  Most other supernatural holidays simply have an opposite counterpart. There’s been a noticeable decrease around the world in enthusiasm during this Halloween 2013 season.  This has in turn caused an increase in evil paranormal activity.  Even here at the offices of Mystic Investigations we suddenly realized we hadn’t yet decorated the office, and set forth trays of candy upon our desks.  Halloween 2012 on the other hand was a very exciting year for Halloween as the All Hallows Eve Spirit could be felt surging through us all with celebrations around the globe.  Last year we jumped the gun and started decorating in late September.  This included everyone virtually simultaneously placing generous dishes, and trays of scrumptious chocolates, and candies on their desks for all to share. I was walking about our facility wondering why there wasn’t candy everywhere allowing for one to almost have an entire meal by visiting everyone’s work areas.  Then I realized I myself was guilty of the same crime.  Nobody was coming into Xavier’s office to get some Orange Halloween Kitkat bars because Xavier had none to give.  Well at least until now.

I called an emergency board meeting to discuss the situation as we observed our town of Woodland Springs had very little decorations on the front lawns of homes along with our annual haunted house project lacking volunteers.  Even the Halloween store, and costume shops weren’t doing well.  We immediately woke ourselves from our trances, and have resolved to wake up the entire town as we investigate what happened to the Spirit Of Halloween.  At least in our small part of the world we will have to act as the Halloween Spirit because it’s presence is altered, and incomplete.  At least that’s what our resident witch Rebecca Abernathy, and our psychic Julia Hathaway are sensing.

What Is The Spirit Of Halloween

The Spirit Of Halloween is a sub-conscious like entity of both light, and darkness in balance that exudes a general feeling of emotional beneficence, and whimsical spookiness throughout the world during the Halloween season.  Generally this effect is only felt by human souls who help bolster the Spirit with their Halloween celebrations.  The Halloween Spirit is an amalgam of the consciousness of the leader of Halloween, and the collective consciousness of humans, and other sentient entities, Including the Goddess Gaia, aka the soul of the Earth.  The Leader of a given holiday provides a foundation for a paranormal holidays spirit, and helps guide the collective consciousness that it’s composed of. When something goes wrong it indicates there’s an issue with the leader.

Who Is The Leader Of Halloween?

The leader of Halloween is cloaked in secrecy but we know they’re the only known Angel-Demon Hybrid whose seen as an abomination by both Angels, and Demons.  Yet at the same time this hybrid is the only one trusted to maintain the balance of good, and evil within the Halloween season.  However that hasn’t stopped nefarious beings like the Anti-Claus from attempting to take over Halloween.  The hybrids gender is unknown, and they were last seen several centuries ago when chosen to preside as judge at the trial in which Santa Claus was accused of violating the Supernatural Secrecy Pact.  The Halloween Hybrid cloaked their identity, and after the trial both Angels, and Demons tried to capture them unsuccessfully.  He or she is on the most wanted list of Heaven, and Hell.  Luckily the power of a Demon-Angel hybrid is quite formidable so they’ve eluded capture, or worse.

The Hybrid is known to live in a mystically cloaked location that is almost always nightfall with a full Moon, except for brief sunrise/sunset periods.  It’s also perpetually autumn in 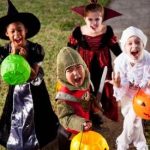 the enchanting Halloween town constantly teaming with costumed kids trick o treating with glee.  It’s suspected the children are ghosts so even the dead contribute to the Spirit Of Halloween which would keep with the balanced theme of Halloween itself.  Some psychics, seers, and mystics have recently also caught a glimpse of vampires, werewolves, zombies, and other paranormal beings lurking about the dark shadows mildly scaring the kids to yield a jovial reaction. Yet amazingly the nefarious beings don’t lay one hand on the kids.  There’s conjecture that these beings are actually dreaming, and appearing in an astral form under the control of the Halloween Hybrid.  Since we’ve never heard any stories of this before it’s assumed the dark entities have no memories of this when they wake up.

Our assumption is that something has happened to the Halloween Hybrid causing a major disruption in the balance of Halloween neutrality.  We believe it’s no coincidence this is happening on the one Halloween that prophesies the return of the Devil in physical form for the purposes of fathering the notorious Anti-Christ.  Could demonic forces have finally captured the Demon-Angel?  It stands to reason that they would need to be neutralized in order to tip the scales toward evil to facilitate the resurrection of the Devil.  We, along with other supernatural warriors, are planning to travel to the Devil’s Pentagram in Kazakhstan on Halloween to try, and thwart this effort.  In the meantime we will attempt to investigate the status of the Halloween Hybrid.  We urge everyone to bolster the Halloween Spirit within them, and push the forces of evil back into their proper alignment.