Posted on October 28, 2019 by Halloween Haunter 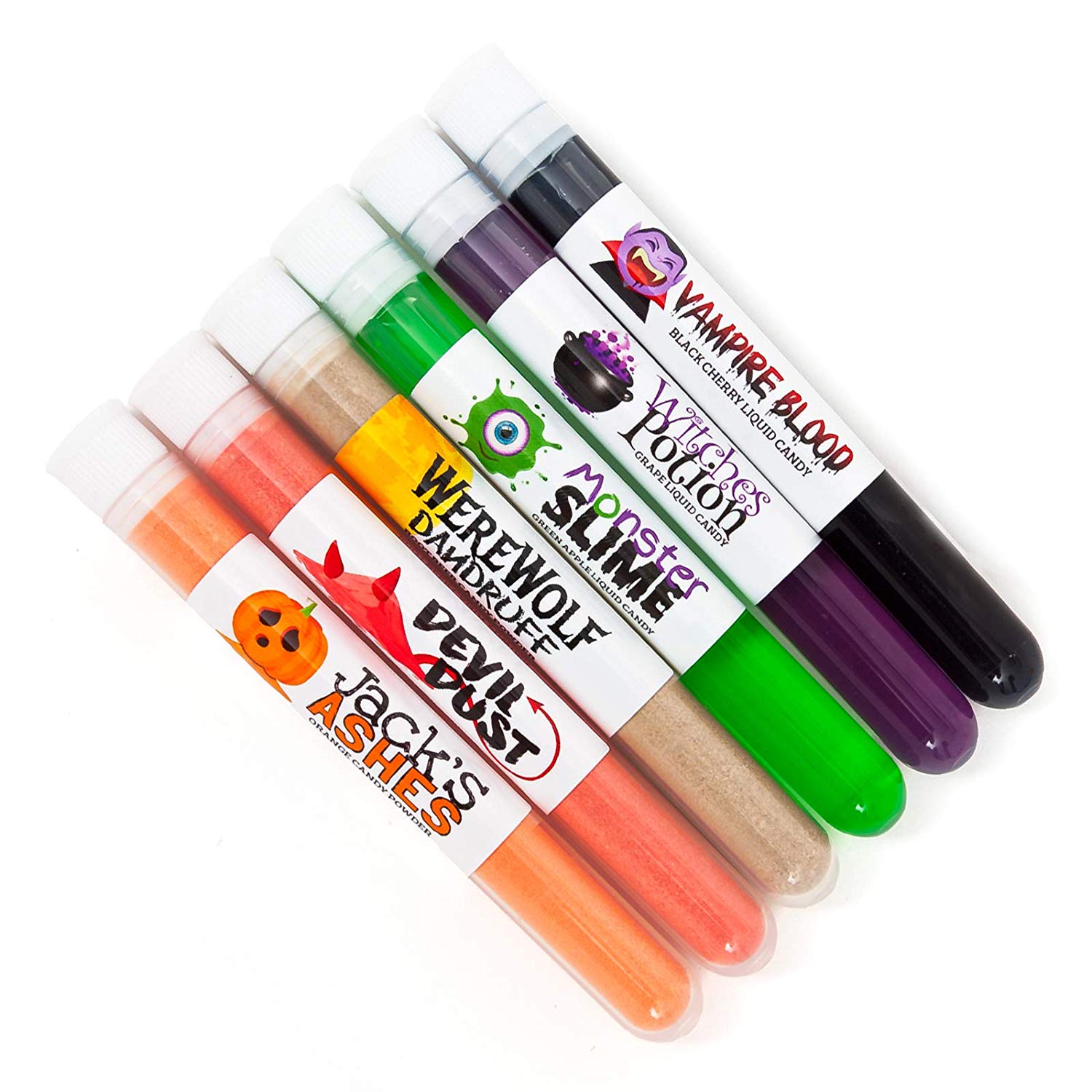 This Halloween add some new terrifying treats to your spooky smorgasbord! Pictured above are vile vials of ghoulish goodies consisting of vampire blood, witches potion, werewolf dandruff, Devil dust, Jack’s ashes, and monster slime. Most likely the slime is from The Blob. In reality the test tubes are full of liquid and powder candy of a non-supernatural sort. These crazy confections are flavored black cherry, grape, green apple, root beer, strawberry, and orange. They are the perfect party favor or special surprise for Trick Or Treaters.🍬

What If These Test Tubes Were Full Of Real Supernatural Substances?

That being said if the above items were real paranormal perplexities then indeed a human could consume vampires blood. Interestingly enough, it does taste sweet like that of black cherry. It would give a person temporary supernatural strength, speed, agility, and enhanced senses. If one should be drained of blood while the blasphemous blood resides in their body then they would become a vampire themselves! A witches potion could be just about anything but lets say it was made by a good witch to grant one with temporary magical powers. It would provide one hell of a Halloween with very little side effects if done properly. The slime of a Blob Monster is nasty stuff and the green color is often from radioactivity. We would recommend nobody eat that grotesque goo! It would surely cause extreme illness and probably death! Same with this Zombie Booger Candy we found!🤢

The Dust Of The Devil And Essence Of Werewolf

Werewolf dandruff doesn’t exist as these are freshly transformed beasts each night. There’s also the fact that most supernatural beings don’t suffer from such human maladies. Whatever the silly stuff is you wouldn’t want to eat uncooked werewolf parts and risk getting the Lycanthrope Virus. Of course, nefarious wealthy elites do partake of werewolf steaks on special occasion during secret Satanic ceremonies. The Devil Dust could possibly be a real substance with some similarity to Fairy Dust. However, it would stink of brimstone, and taste vile. More than likely you might find yourself cursed or see your soul bound to the Devil! We’d rather eat wholesome Unicorn Dust. The stuff that rainbows are made of.😈

Then we have Jack’s Ashes which could be something supernatural or simply dehydrated pumpkin powder. The Spirit Of Halloween has taken physical form at times. One such incarnation is that of a Jack-O-Lantern creature who goes by the name Jack. As the Spirit encompasses good and evil it may have spooked a wicked witch or vampire slayer who then vanquished it! The ashes it left behind could be used in a variety of magical spells. Consuming the orange powder would probably link you to the Halloween Spirit and provide various protections from harm. Somewhat akin to those born on Halloween. Celebrating All Hallows Eve would perhaps stoke super powers within. Powers that would enable you to handle the hidden horrors of Halloween that lurk in the sinister shadows just beyond gleeful kids begging for candy! You Can Order This Carefully Crafted Candy Here…

We love all things Halloween! Whether it's glee of trick o treating, the iridescent allure of the autumn season, or the spooky mystique of supernatural beings. Enter the world of Halloween all year round on our All Hallows Blog.
View all posts by Halloween Haunter →
This entry was posted in Halloween Candy. Bookmark the permalink.
Copy Protected by Chetan's WP-Copyprotect.