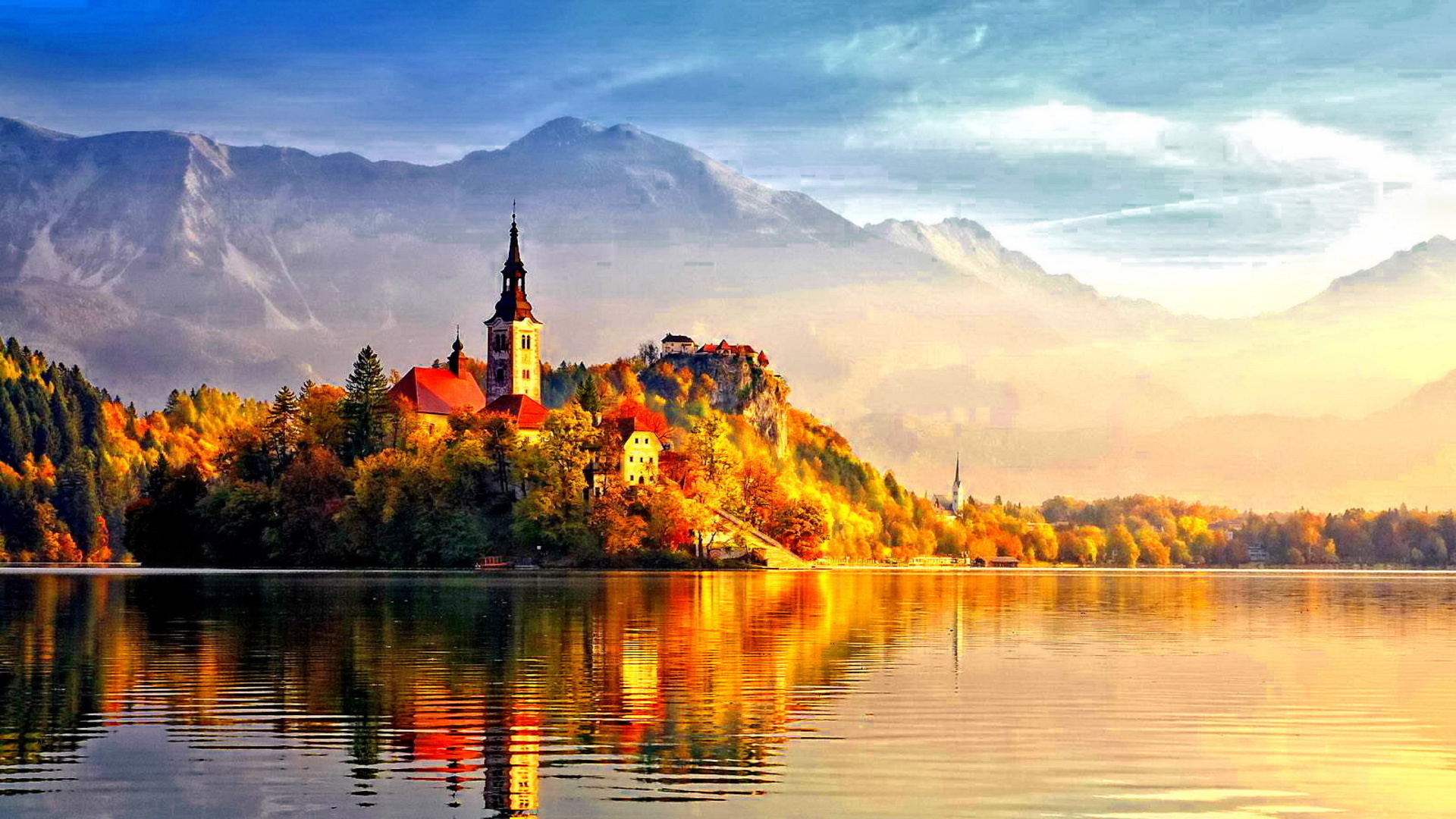 What Is Halloween Island & Where Is It Located?

Halloween Island is the Capital of the Halloween holiday led by Queen Of Halloween Shala. It is somewhat equivalent to Santa Claus’s Christmas Capital North Pole City. The souls of deceased children, and living children in an REM dream state arrive there to celebrate Halloween 365 days a year.  Adults with the Halloween Spirit dwelling within can end up there as well. The living who dream of it generally wake up without realizing they were there in an Astral energy form akin to that of a solid hologram of pure light.  Halloween Island is a happy fun place full of magical mystery, and surprisingly safe scares.  Trick or treating is always taking place with kids laughing gleefully in the streets, and astral adults passing out treats from their dream homes clad in Halloween decor. Those who eventually feel a sense of well being after the death of a child instinctively know they are spending time with them each night on Halloween Island in their dreams. The island is a bridge between life, and death mingling with the dream plane working to keep everything in balance courtesy of The Spirit Of Halloween.

Halloween Island has no one location when it comes to Earthly geography. The mystical island is perpetually inter-dimensionally out of phase with our reality. It is located in the realm between life, and death amid the astral plane. Yet if one were given an invitation any time of the year there would be an access porthole somewhere on Earth. Only on Halloween does it materialize in a random physical location in the ocean for 24 hours in order to channel the Spirit Of Halloween to ensure the delicate balance between the forces of dark, and light remains just.  During this time a cloaking spell keeps it from being visible to the human world.  However it is vulnerable to possible incursions by powerful paranormal entities.

Halloween Island is full of everlasting iridescent autumn forests with perpetual gracefully falling foliage that paints the ground in a myriad of brilliant masterpieces.  The fantastical foliage covers the entire range of the rainbow including that elusive blue.  Some of the leaves even shimmer with glitter, and others glow in the dark. The leaves crunch underfoot after a few weeks before blowing away into the wind off into the sea only to disappear, and then reappear as new colored leaves on the trees. 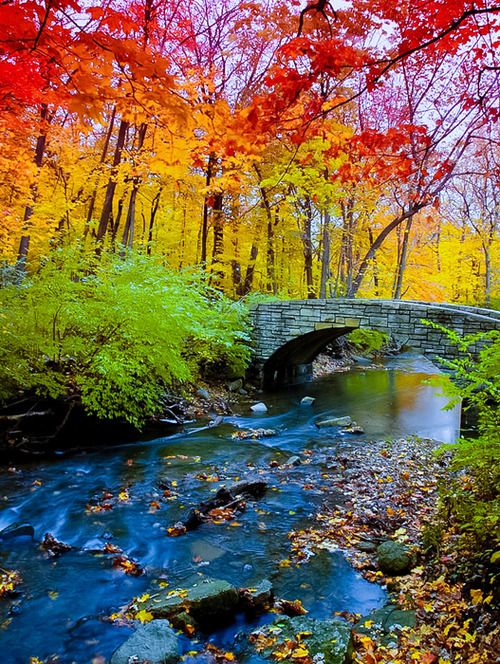 Twelve hours of the day on Halloween Island are timeless twilight causing the skies to be bedazzled in an unimaginable array of palettes amid sparse intermittent clouds. 1 hour at the beginning, and one at the end of this 12 hour phase has the sun visible just above the horizon.  The other 12 hours are darkness that further highlights any phosphorescent foliage.  The skyscape always sports a brilliantly bewitching behemoth of a full Moon nestled among twinkling stars including some of visible colors. On Halloween night the Moon turns blood red as the October Moon is known as the Blood Moon. Comets, and shooting stars of a falling & ascending nature take place.  A falling star indicates the arrival of a new child’s soul to Halloween Island while a rising star is one leaving. Ironically only on Halloween is there a completely sunny day highlighting the full brilliance of the fall foliage. 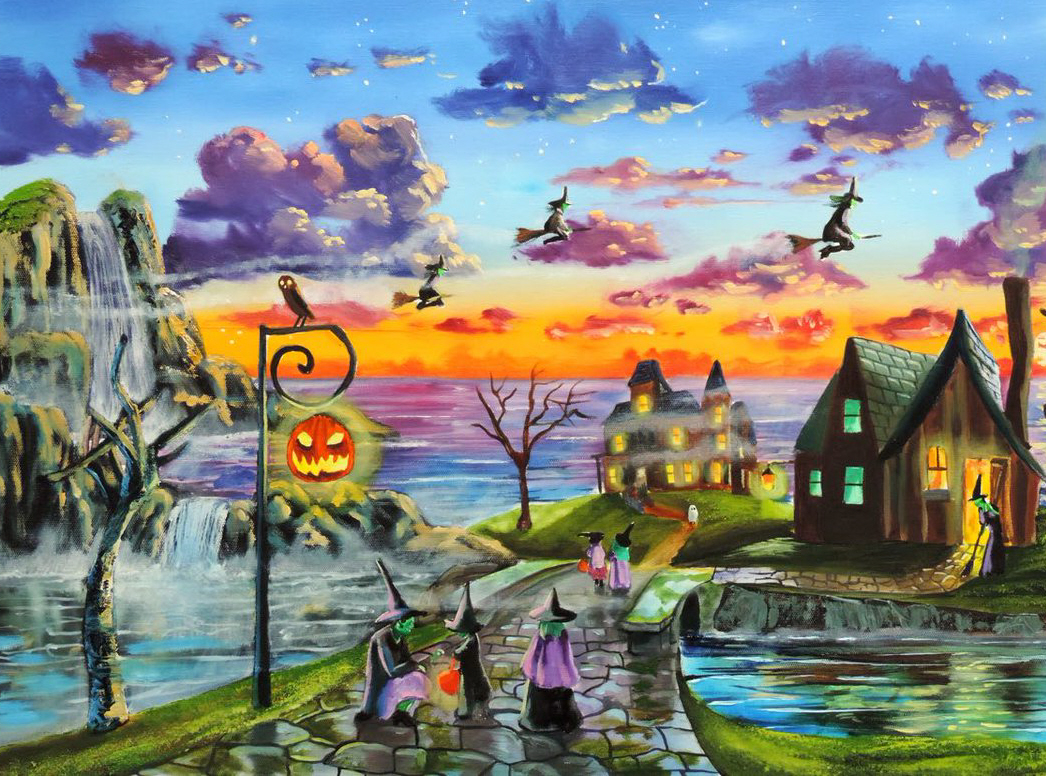 The weather of the island is calm, and cool at night while warm during the twilight hours.  More or less perpetual Autumn weather that’s not too cold or not too hot.  Once in a while it will mist, or lightly rain for a brief period of time.  A storm would indicate trouble for Shala the beloved Halloween Queen.  There is usually a whistling wind causing leaves to flutter about freely. The winds are stronger on the beach shores that look out on to an endless sea.  The coastal waters are warm enough to swim in but venturing out too far will set you adrift in the astral plane. 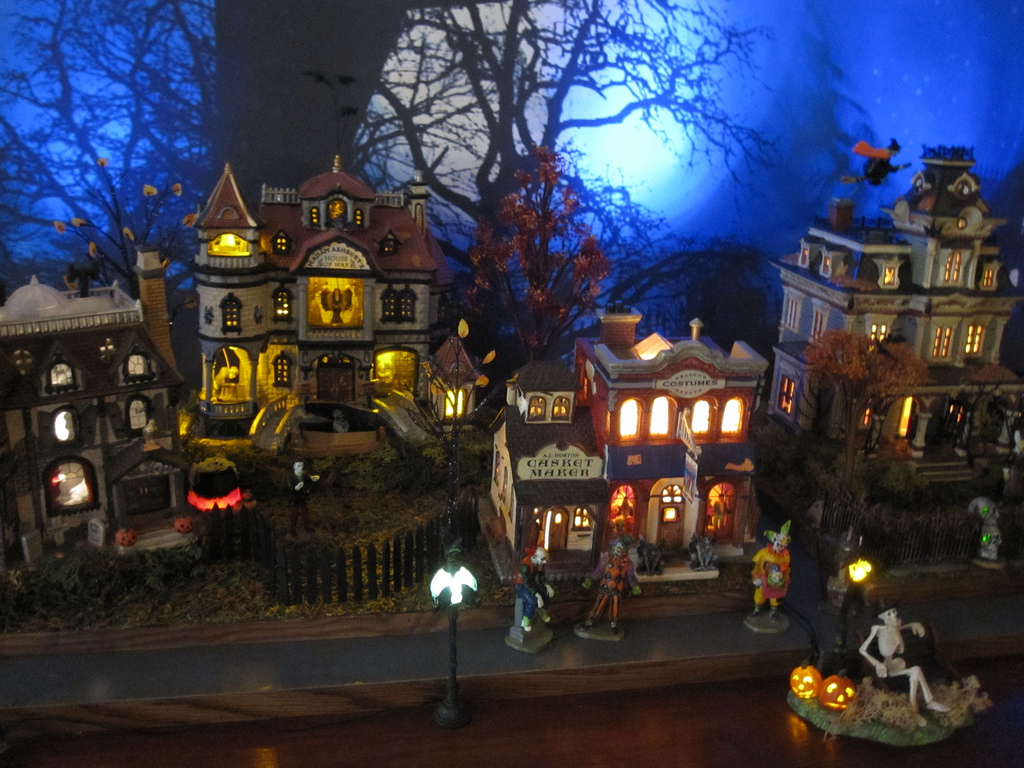 Halloween Island is made up of a variety of small villages reflecting various nationalities, and time periods in Earth’s history. You can find cavemen children going cave to cave, and on the other end of the spectrum a village from thousands of years into our future just before humankind ascends to Godhood via technological evolution, and complete mastery of the mind.  All bound together by candle lit jack o lanterns shooting rays of light into the shadows along with the mysterious Halloween Express railroad. The island also has many mystical amusement parks that put even Disney World to shame! Kids perpetually trick o treat as giggles stroll across the autumn scented air with a hint of leaves burning in the distance.  The atmosphere is beyond enchanting amid scary entities such as vampires, werewolves, and zombies playfully pretending to attack but never completing the act.  The children scream, and squeal with glee as they run away knowing it’s innocent fun with no real danger present.  These paranormal entities of evil are actually dreaming in the real world, and once on Halloween Island in Astral form they are helpless puppets of Queen Shala.  It’s actually a cleansing process for them since being evil 24-7 can actually cause biological beings to degrade.  Even demonic based ones like vampires.  After all the Universe is a creation of God!