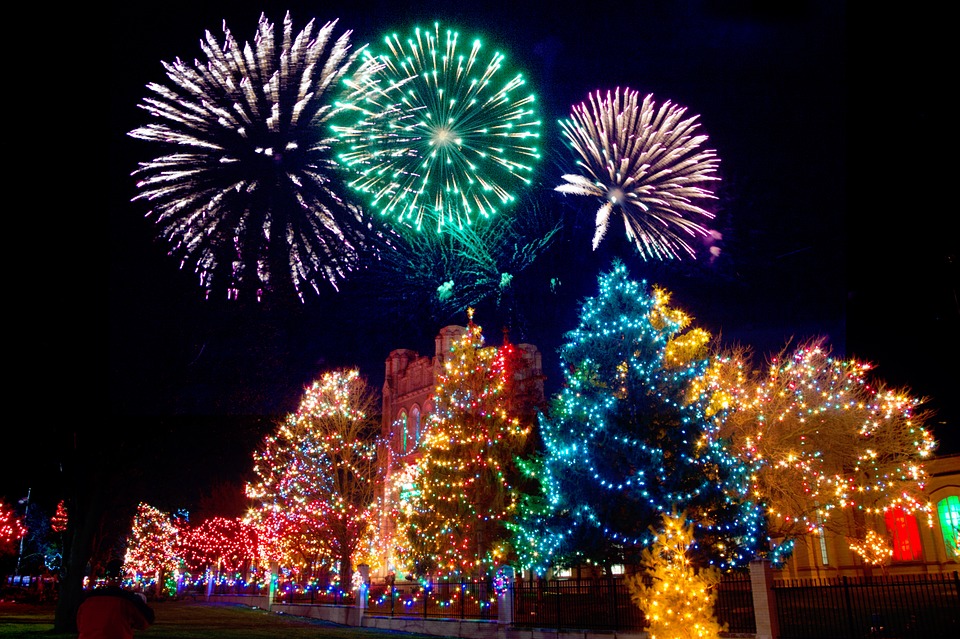 The world’s most powerful Demi-Angel, Santa Claus, celebrated American Independence Day despite being neutral when it comes to America or any other nation on Earth. He holds no allegiance to any one nation for most modern countries didn’t exist at the time of his birth several centuries ago! Naturally, he does revere his own sovereign North Pole City.  The reason he celebrates the Fourth Of July is due to Mrs. Holly Claus being an American citizen.  Actually, she enjoys dual citizenship status in both the US and North Pole City.  Holly brought a lot of American Christmas traditions to the North Pole and continued to keep up with the times throughout the 19th and 20th centuries. However, all the Christmas traditions of the various nations are reflected when visiting Santa’s winter wonderland.

On July 4th the temperature at North Pole City was a balmy 52 degrees Fahrenheit under mostly sunny skies. A mystical land of the Midnight Sun that never sets during the Summer months. Now, of course, Santa could make it warmer via his extensive Demi-Angel powers, the magical North Pole City Weather Control System, or even calling upon Summer nature deities. However, that wouldn’t be fair to the cold-loving Elves nor the beloved sentient reindeer. Then there are the various Snow, Ice, and Winter Nymphs who frolic about the cool utopia. All the snow in town was melted except in areas magically managed by Jack Frost where Frosty The Snowman skips and slips about with glee.

Mystical flowers of all colors bloom about amid the plethora of Evergreen trees and shrubs. Extra-large naturally growing enchanted Poinsettia plants spot the landscape with striking crimson leaves.  The minority deciduous trees, also specially enchanted, are lush with green leaves.  Santa planted them especially for Mrs. Claus so she could enjoy the iridescent leaves of autumn fluttering forth.  Then there are the almost alien trees with leaves of blue, sky blue, and white designed by Santa, Mrs. Claus, and various nature nymphs and fairies. They are deciduous trees meant to survive in winter. Their leaves are tougher than usual and they can survive off Moonlight in the dark winter months. Despite all the signs of Summer, Christmas decor was adorned everywhere as usual.  It truly was Christmas in July!

The Claus Family Flies About The American July Fourth Festivities 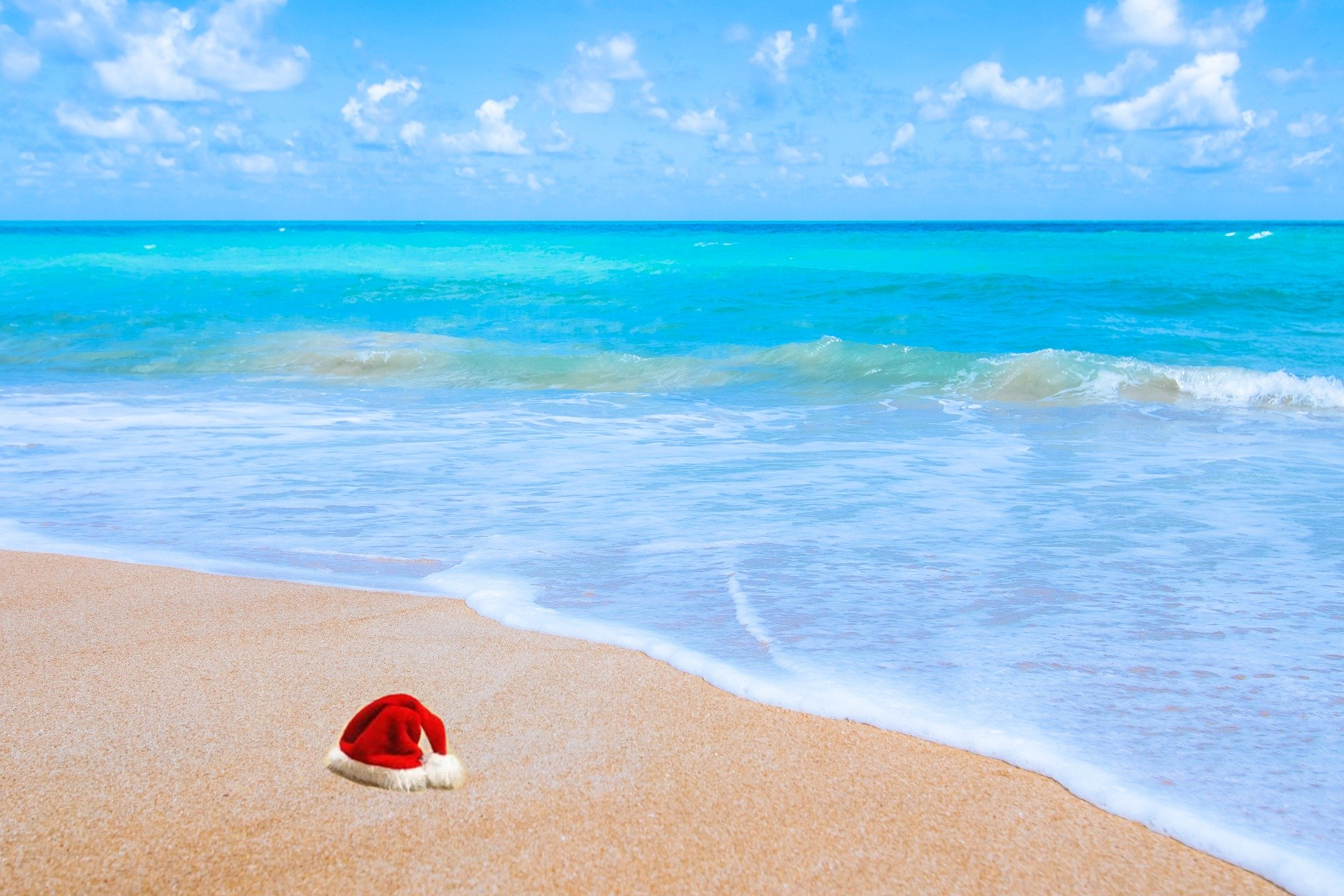 On the morning of July 4th, Mrs. Claus tended to her garden after a hearty breakfast at Claus Manor.  Then Santa checked in with the Elves to see how the Christmas In July planning sessions were going. This included the first results of the Naughty Or Nice List and the first toy design meetings. Afterward, he hitched up the enchanted reindeer to his magical crimson sleigh, and the entire Claus Family hopped aboard.  Santa, Mrs. Claus, and his perpetually young kids Nicholas, Jr. & Mary, flew at lightning fast speed to the shores of a deserted tropical island in the Pacific to enjoy a beach picnic along the serene seas.  They spent several hours there before flying to the Continental United States to partake of various fireworks displays in approximately 24 different communities.  Since the North Pole sun doesn’t set in the Summer they can’t enjoy fireworks there. However, their Christmas fireworks show is beyond anything you could ever hope to imagine!

All goes well most years except for that one unfortunate incident.  In an undisclosed rural community somewhere in Missouri a deranged drunk staggered into Mrs. Claus spilling his beer all over her beautiful red and white dress.  Three of his clearly intoxicated friends stood near him giggling like sad little children.  Santa calmly, yet firmly, demanded he apologize to his wife. Instead, the inebriated guy let some choice expletives fly forth not only in front of Mrs. Claus but his kids as well.  Both Nicholas, and Mary gasped in disbelief that such harsh language was allowed to reach their innocent ears. At the North Pole magical censoring spells bleep swear words everywhere!  It’s true the family is cloistered from the real world in a cleansed almost 1950’s atmosphere in their hidden sainted city. Thankfully, the magical atmosphere of the winter wonderland somewhat fades bad memories from the outside world.

Santa Claus Deals With The Unruly Drunks Who Insulted His Wife!

The over six foot four tall, heavy set, and imposing Santa Claus towered over the drunken twenty something individuals. Clearly the finest of the Millennial Generation! He then said, “I kindly ask that you apologize to my wife, and children for your immature behavior and all will be forgiven, my lads.”  They all snickered sadistically as the guy foolishly punched Santa in the stomach after saying, “Here’s your apology old man!”  The snide cackling immediately stopped as the guy gripped his hand in pain while Santa stood still unfazed by the attack.  He smiled, and said, “Once again I must demand an apology for you have dishonored my wife, and corrupted my children with your unsavory antics!”  The guy gripping his hand screamed, “Beat the hell out of this bastard!” All four men then charged Santa Claus punching and kicking him with great effort.  So much so that some of the guys fell down twice due to their drunken state.  It was like attacking a giant redwood tree.  Truly an insane act of pure idiocy! Mrs. Claus looked a bit shocked while the Claus Kids smirked just a bit clearly enjoying the domination their dad was displaying. The punching stopped rather quickly as it was very painful to their silly little human hands.  Although, the kicking continued on a bit longer as they still held hope they’d beat the old man, and show him who was boss.

The out of breath fools were unable to budge Santa from his firm stance.  The Great Claus just started laughing heartily, “Oh you crazy kids! Will you ever learn?”  All the men held their hands in agony as one said, “What the hell are you made of? Steel?”  Santa replied, “No just extra dense Angelic flesh. Now boys where’s my apology?  I really must insist!”  Santa took a step toward them and gave them a stern look as he started to unlace his large black belt as if he was going to spank them with it.  They then apologized to Santa, Holly, and the kids.  He declared all was forgiven as he bear-hugged all three men.  A subtle white light could be seen amid the huge hug.  When it was over the men no longer felt the pain of their futile violent blows nor were they under the influence of the tons of alcohol they had consumed all day long.  They just walked away silent in a shocked daze with thoughts of peace, and goodwill dancing about their minds with intermittent visions of sugar plum fairies.  From that day forth their lives would change for the better forever! Unfortunately, they still never quite made it to the Nice List!

The Return To North Pole City

The world’s holiest family returned to their Christmas land of the Midnight Sun at about Midnight US Mountain Standard Time.  Before retiring to sweet slumber Santa reviewed the latest Naughty Or Nice list he received from his Chief Elf. As he dreamed of sugar plum fairies, elated elves, rambunctious reindeer, and naughty Norse nymphs playing in the glittering snow a disturbing flaming apparition of the Devil appeared in his fireplace.  He told Santa, “My sinful son the Anti-Christ will be born into this world soon, and your brother of darkness the Anti-Claus will return!  Together we shall destroy Christmas, and every magical holiday that marshals the forces of all that is holy, and good.  This shall be the dawn of the era of darkness. My demonic children of the night will replace humanity as the dominant species on this planet.  Victory at the final battle of Armageddon will be ours as you burn to ash under my new unholy Sun!  Your Christmas Star Of Bethlehem will be extinguished for all eternity amid my glorious reign of tantalizing terror!  I promise your holy reign of light is about to end Saint Nicholas!”

Santa Awakens From A Psychic Nightmare

Santa woke up in a highly unusual cold sweat as he gazed over at the fireplace observing the chilling vision of the Devil’s face in the flames.  The fire swirled about madly sending hot winds about the room with the hellish screaming maniacal laughter echoing everywhere.  Santa waved his hand at the flames sending a cold white burst to instantly extinguish them while yelling, “Be gone you heathen of Hell!”  There old Saint Nick sat silently in the darkness remembering his last run-in with the Devil at the First Battle Of Armageddon.  The injuries he suffered at the hands of his cowardly twin brother the Anti-Claus. The faith of Father Christmas wavered for few moments but the Spirit Of Christmas reignited his belief that the Angels of Heaven would be victorious in their battles against the forces of darkness.   If only he could bring them, and the Earthly Gods together to fight their common enemy while saving humanity & the Earth from damnation!

The above story happened in 2014 and unfortunately some of the events of the dark vision have occurred! The Anti-Christ was born in 2015 along with the return of the Anti-Claus that same year during the Third Battle Of Armageddon!

See Also: What Does Santa Claus Do In Summer?

By Xavier Remington | Copyright © 2014 All Rights Reserved MysticInvestigations.Com If you’re seeing this entire article on any other site besides Mystic Investigations then contact us immediately!