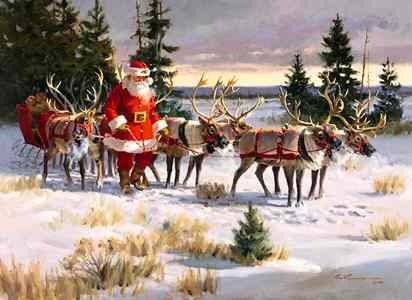 Before he officially became Santa Claus, and Saint Nicholas, he was simply known as Nicholas Of Myra. In those ancient times, he relied on horses to pull his carriage(warm winter areas), or sleigh(cold winter areas) to deliver gifts to deserving children in his region. He had yet to come up with the idea of flight to quicken the delivery process. Nor did he realize he had the power to do so courtesy of his angelic lineage. Reindeer were something he had yet to come across. Nicholas’s delivery territory expanded with each passing year. He pushed ever further into colder winter zones since people were in desperate need of good cheer in those dark gloomy cold times. Terrifying times before Christmas as we know it today!

At some point, Santa realized his horses traveling at normal speeds would never be able to keep up with his ever-growing Christmas present deliveries. So Santa began experimenting with the enchantment of his horses.  A process of transferring a bit of his Angelic grace into the animals to supercharge them.  Things seemed to be going well as the horses ran about at super speed. Then one horrible night in the Finish Lapland’s his horses were neutralized by the dark power his evil twin brother the nefarious Anti-Claus, a powerful Demidemon.  The horses became Hell Horses and went on a rampage that Santa stopped before anyone got hurt!  However, there was a great deal of property damage.  All seemed to be lost during that fateful Christmas Eve when all the sudden a group of curious reindeer surrounded Santa, and he was able to read their thoughts.  He realized that these were special Reindeer destined to be with him for a long time to come.  It’s unknown if some force of good set this up.

The Destiny Of Santa’s Reindeer

So Santa Claus enchanted the reindeer to the fullest, and they became fully sentient complete with intelligent speech over the course of time.  It’s unknown if they are linked to human souls, and could, therefore, be humans in various Parallel Universes.  For whatever reason, they were best suited to Angelic enchantment, and they could not be turned evil by the Anti-Claus or other magical entities! It was destiny that Santa ran across them! They loved flying while later experimentation with horses showed that equines were too nervous to levitate aloft. Santa also toyed with the idea of utilizing flying Unicorns or naturally flying Pegasus. However, those already enchanted animals were independent free spirits produced by God and Archangels. The Reindeer were like Santa’s Elves. They love working together for a prolific personality.🦌

The nine enchanted reindeer of Santa Claus are: