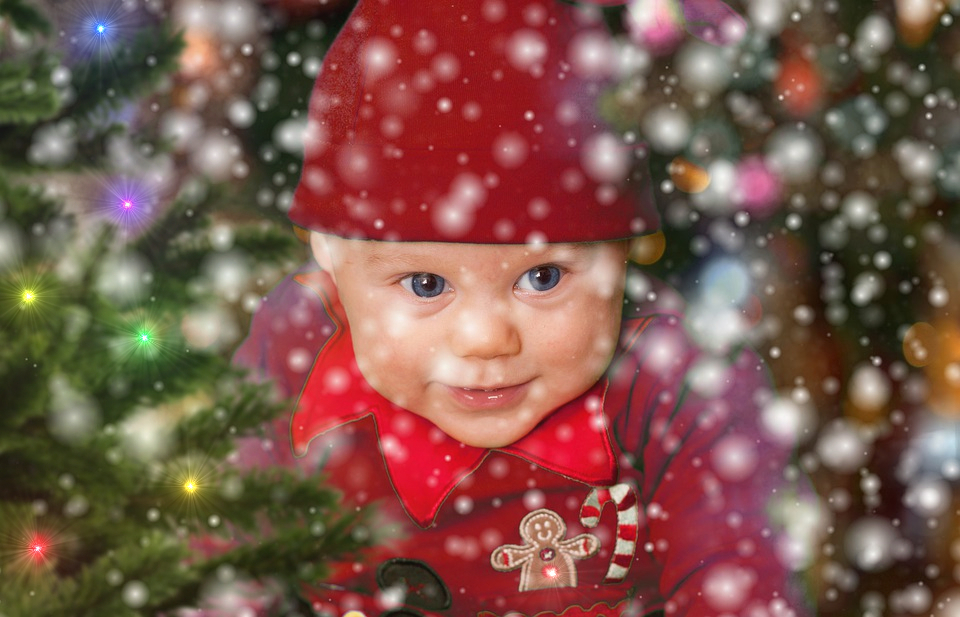 Happy New Year My Children!  Tis’ be Santa Claus guest blogging here at Mystic Investigations! Gerbert is one of my younger Enchanted Elves with a constant craving for peppermint ice cream.  In fact, he’s a member of Elf Creamaholics Anonymous (ECA) since some of Santa’s Little Elves crave cold sweet foods a bit more than they should. Such cool confections make them merry and actually provides supernatural sustenance. Mystic Investigations President Xavier Remington first came across the barely two-foot-tall denizen of desserts sitting in Mrs.Claus’s dark freezer on New Years’ Morning 2014.  Xavier was staying with us at Claus Manor in North Pole City when he decided to raid the fridge.  Yes Xavier I know when you’ve been naughty, and when you’ve been nice! 🙂  Upon opening the door he found Gerbert eating from a wooden bucket of my wife Holly’s homemade peppermint ice cream with a giant wooden spoon. Both stared at each other in shocked silence until the Elf jumped out of the freezer, and ran from the house screaming,”eeeeeeeeeeeeeeeee!“🍧

Later while walking through a deserted downtown North Pole City near the Witching Hour, Xavier saw Gerbert scurrying from the side of the Ice Cream Shoppe down a dark polar alley. The adorable little fella had pink ice cream dripping down his face forming a pink icicle beard.  When looking into the Shoppe window Xavier saw little pink footprints on the floor.  That’s when he dubbed Gerbert the Peppermint Ice Cream Bandit.  Xavier attempted to track the pink footprints but they stopped cold at the feet of Frosty The Snowman.  It seems Frosty had been tracking them from the opposite direction and hadn’t noticed the tiny prints swerve off into a grove of pines.  Unfortunately, he had dropped snow all over the trail, and it couldn’t be followed back. Jolly Frosty spoke to Xavier for a bit and mentioned how he was contemplating getting a carrot nose job from an Elf surgeon. Xavier indicated that was a really bad idea before they parted ways!

While walking back to Claus Manor Xavier stopped at the Enchanted Reindeer stables.  There he spoke with my sentient talking reindeer.  Rudolph The Red-Nosed Reindeer was the most chatty and seemed to babble on about all manner of subjects.  Xavier being the eggnog lover that he is, compelled Rudolph to offer him some nog from his trough.  He gladly accepted and got down on all fours to slurp up the mystical eggnog with sparkles in it.  Don’t worry humans can’t get sick in North Pole City so you can slurp up puddles of whatever, or eat random stuff you find on the ground without any negative consequences.  Those sparkles in the nifty nog turned out to be enchanted nutritional supplements.  The supernatural supplements caused Xavier to levitate to the ceiling of the stables.  Seconds later Gerbert ran through the stables below Xavier screaming, “eeeeeeeeeeeeecccce cream!” Two other larger Elves ran after him in hot pursuit!

On the final day within my winter wonderland, Sunday, January 5th, 2014, Xavier stopped in at the Ice Cream Shoppe for one last tremendous treat.  A supernatural sundae with seven scoops of different ice cream topped with egg nog sauce, chocolate syrup, whipped cream, and magical sparkles imbued with the Spirit Of Christmas.  In the corner of the Shoppe was none other than Gerbert The Elf sitting on a stool with a Dunce Cap on his head as punishment for his gluttonous thievery.  As Xavier started to eat the peppermint ice cream portion of his sundae Gerbert slowly edged off the stool staring intently at the pink sweets. At that moment his Creamaholics Anonymous sponsor stopped him by reprimanding, “Don’t even think about it! What would Santa say Gerbert?”  Xavier left but not before saying goodbye to the annoyed little Elfy man with a “So long Gerbie!”  Gerbert then let an expletive fly as he snapped back in his munchkin voice, “It’s Gerbert, you big ninny!”  His sponsor and others in the Shoppe gasped in shock. The sponsor Elf had a scowl on his diminutive Elfin face while yelling, “Gerbert we’re going to see Santa Claus now!”  Xavier ran out quickly while laughing hysterically.  He had no ill will toward the Elf since he knew he was going through ice cream withdrawal symptoms.

Later on, the private jet carrying Xavier, and the entire Mystic Investigations Team back to Colorado discovered Gerbert was a stowaway.  Gerbert never made it to me and gave his sponsor the slip.  Xavier went to the galley freezer for some of Mrs.Claus’s peppermint ice cream he saved and found the ice cream loving Elf pigging out again.  Both stared silently at each other until Xavier screamed, “Gerbert Nooooooooo!”  The funny fella went running down the dark corridors of the jet with ice cream running down his face, and red Elf uniform while bellowing, “eeeeeeeeeeeee!”  Meistiensos, a Vampire on board attempting to turn away from his dark ways, caught him. He instinctively bit into Gerbert drinking his precious emerald blood.  Blood that increases strength in vampires, and should provide a sense of well-being.  However, Meistiensos was already recovering from excessive blood lust, and couldn’t help himself.  The vexed vamp went berserk from the supernatural blood and crashed through the airplane hatch flying away into the dark polar night. Several people were sucked out of the depressurized plane but almost everyone was saved by the good witch Rebecca Abernathy, and her levitating metaphysical Mystic Sphere.

In the nick of time, I picked up the good vampire Drake Alexander in my sleigh complete with nine enchanted reindeer led by Rudolph.  Drake was the only one Miss Abernathy was unable to save but thankfully he’s rather indestructible. I dropped him off inside the jet mid-air and retrieved Gerbert. I suggested he apologize to the Mystic Investigations Team for the trouble he caused. He then uttered a quietly shy, “Me Sorry!”  We then flew back to the North Pole, and he spent the rest of the night sleeping between my wife Holly, and I so we could keep an eye on him.

Now it’s nearly 9:00 AM Monday morning here, and I’ve had a stern talking to the stubborn lil’ ice cream loving Elf.  I’ve turned him over to his Elf Creamaholics Anonymous sponsor and told my Chief Elf to keep him busy at work so he stops obsessing over the chilly creamy goodness of our delightfully delectable desserts.   Thank you for all you do in the fight against evil Mystic Investigations!  I enjoyed your company at my home, and hope to see you again next year!  Xavier, I bless your team of brave souls, and pray for your safety in 2014!  Merry Christmas, and Happy New Year To All! 🎅