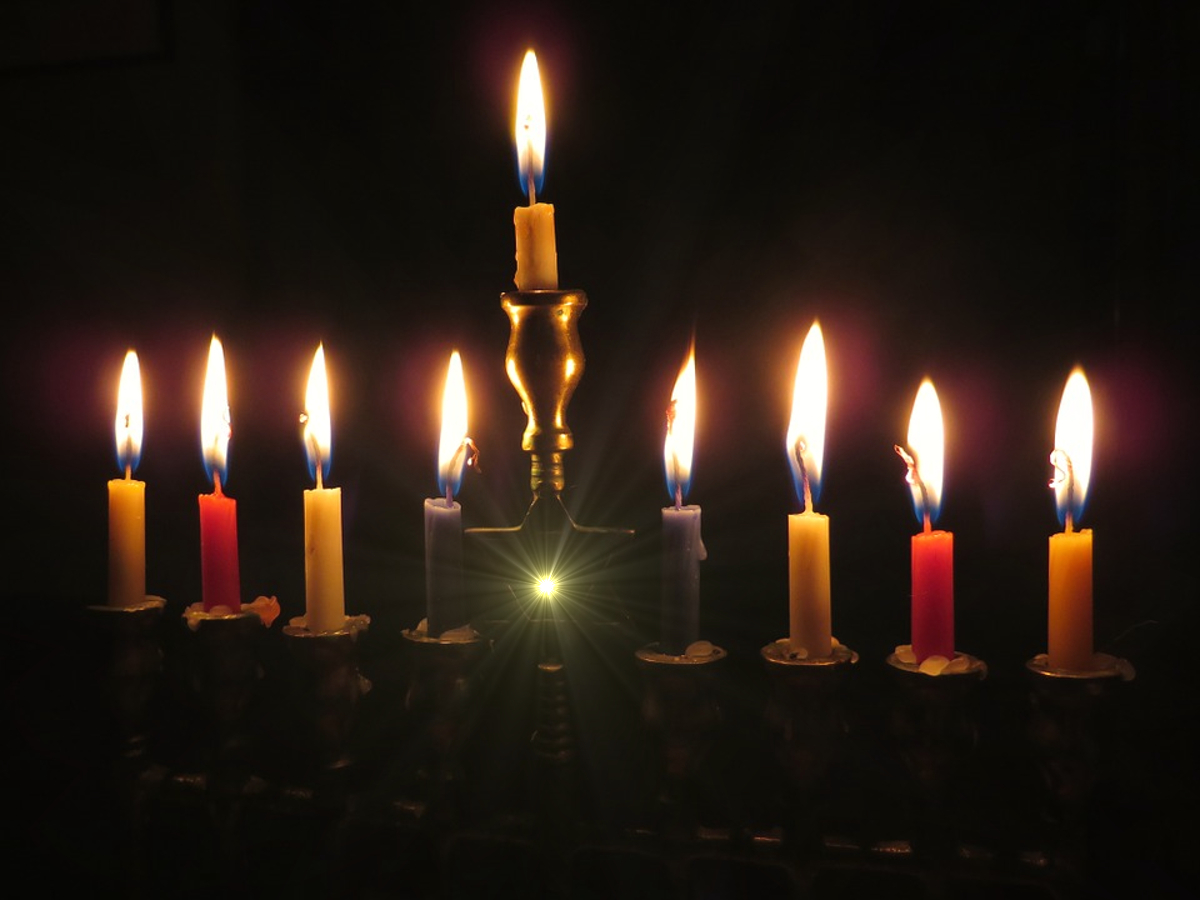 Happy Hanukkah! The Demi-Angel Saint Nicholas Santa Claus is more or less the leader of good in the supernatural world. Christmas is considered the big holiday show of paranormal righteousness. It cultivates the magical metaphysical energies of innocence within gleeful children celebrating the season with toys and treats. In the paranormal world, many holidays harvest this unique powerful magic for the greater good. This energy is then incorporated into the Spirit Of Christmas that repels the forces of darkness around the world that have built up over the past year. Especially after Halloween which springs forth a great deal of darkness even amid its theme of balance between good and evil! The Christmas Spirit is the most energized of the holiday spirits and provides power for various practitioners of magic who fight for all that is right! So how does Hanukkah fit into this supernatural structure?

At its core, Christmas is the celebration of the birth of the Omniverse Demigod Jesus Christ who inspired the Christian religion. Although, a diverse swath of the global populace whether Christian, Atheist, or otherwise celebrates Christmas to varying degrees without even thinking of Jesus. This is especially true since it went mainstream in the 20th century. Hanukkah is a religion of Judaism that celebrates the miraculous victory of the Jewish people of Israel reclaiming their sacred temple of worship from the Greek-Syrian Empire known as the Seleucid Empire. Before this happened over 2000 years ago the Seleucids had defiled the holy temple and utilized it to worship Zeus and other Greek Gods. The Jews were not allowed to openly worship their God and the holy traditions of Judaism. Once they rebelled and drove the Seleucid’s away they found only one day’s worth of holy oil in the temple kept the candles of the ritualistic Menorah lit for eight days. This miracle is the basis for the 8 days of Hanukkah which is also known as The Festival Of Lights. Interestingly enough centuries later Zeus finally apologized for his part in those unfortunate years. Especially since he’s the leader of the largest nature deity faction on Earth! He now works to bring everyone together for the final battle of Armageddon!

Christmas and Hanukkah have similarities in that they both fall in December while exemplifying the spirit of peace and giving to others. Jewish children get simple presents on the 8 days of Hanukkah. However, they’re not all toys and generally not to the same glitzy degree as the one-shot Christmas gifts. Of course, there are some who may still celebrate the old tradition of the 12 days of Christmas. Hanukkah gifts tend to teach a valuable lesson while Christmas gifts are often for pure joy. The joy that is important to fuel the Christmas Spirit for the greater good of humankind. Santa Claus always encourages families to spend time volunteering or donating to those less fortunate than them. Something that is always an essential part of any holidays spirit. Some families even have a tradition of buying gifts for random poor families and leaving them outside their door anonymously.

The Spirits Of Christmas And Hanukkah

That being said there is a Hanukkah Spirit but it is not a sub-conscious enchanted entity like the Christmas Spirit. Certainly, the leaders of Judaism would only refer to something figuratively as being in the Spirit Of Hanukkah much like most outside the paranormal world think of the Spirit Of Christmas in the same way. Holiday spirit enchantment requires a supernatural being to be the holiday’s leader who channel’s the energy of the human collective consciousness celebrating the holiday through them. Often an additional magical conduit is required for the maximum metaphysical effect. Such is the case with Santa Claus and the Christmas Crystal. Hanukkah doesn’t have this nor someone like Santa officially giving gifts. Like the Christmas Spirit, the Hanukkah Spirit may still be absorbed by those who truly observe the holiday with reverence. It is a well of enchanted energy created by the human collective consciousness of those celebrating Hanukkah. It can aid in repelling evil, and bad luck while instilling peace. However, on its own, it isn’t focused like the Christmas Spirit. A great deal of the power can end up seeping away into the ether!

Incorporating The Hanukkah Spirit Into That Of Christmas

Centuries ago Saint Nicholas sought out Jewish leaders and holy men in the supernatural know. He gained their blessing to utilize excess Hanukkah energies by guiding them into the Spirit Of Christmas. It is said there is a secret counsel of Rabbi’s who knows of the real paranormal world and realizes the potential power of the Hanukkah Spirit. They utilize various magics to send forth the spirit to strengthen the Jewish people and the continued independence of Israel. Within the Christmas Spirit, there is a shared goal of peace on Earth and goodwill toward all humankind. These Rabbi’s are rumored to travel to North Pole City on Hanukkah to partake of the 8-day supernatural ceremony in a hidden spot there. Even within North Pole City, only Santa must know of this because nobody has ever seen them. We asked Santa and he refuses to confirm nor deny it. It’s assumed the Rabbi’s wouldn’t want to be seen as colluding with Christianity even though Santa Claus embraces all religions that strive for serenity on Earth!

That being said there are members of the Jewish supernatural community who openly come to North Pole City. Although it usually isn’t during the Hanukkah or Christmas season. They are those who battle the forces of darkness looking for aid, advice, and the latest news on the state of our wayward world! Out of respect for these people North Pole City has a Synagogue which plausibly is where the aforementioned Rabbi’s meet in a secret room there. An Elf originally from Israel named Abe mans it most of the year. There’s a book somewhat based on his story about an Elf named Shmelf. In addition, those of us here at Mystic Investigations who happened to be at the North Pole during Hanukkah saw an eclectic array of enchanted lights coming from the Synagogue while taking a leisurely nightly stroll. The doors were locked and the windows mysteriously frosted so no one could see in!

The Children Of Hanukkah Get Gifts From North Pole City

Unfortunately, the Rabbi’s forbid Santa Claus from delivering gifts to kids who celebrate only Hanukkah as per their parent’s wishes. Although that changes if the parents decide to celebrate both holidays. Something generally frowned upon by the holy Judaic hierarchy. Still, Santa Claus is known to be a rebel. After all, he was charged with violating the Supernatural Secrecy Pact but was found not guilty centuries ago. He is still known to skirt the perplexing Pact in the name of bringing happiness to kids around the world. So he decided to have Abe the Jewish Elf recruit a special crew of Hanukkah Elves to secretly deliver small gifts on at least one of the eight nights of Hanukkah. There is a Hanukkah gift workshop deep underground at the North Pole for maximum secrecy. Abe has his own sleigh pulled by two reindeer Santa loaned him. He even has to deal with interference from the Anti-Claus just like Santa does during his deliveries. However, Santa intervenes so Abe can continue his gift-giving safely. In this way, Santa has respected the Rabbi’s wishes by not technically delivering the presents himself. Happy Hanukkah To All And To All A Merry Menorah Lighting Night!🕎

By Xavier Remington | Copyright © 2018 All Rights Reserved MysticInvestigations.Com. If you’re seeing this entire article on any other site besides https://mysticinvestigations.com then it has been illegally copied and should be reported immediately!