Who Is Jack Frost? 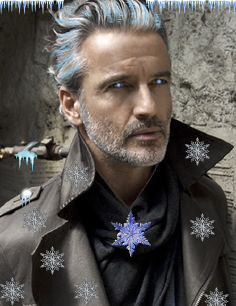 Jack Frost, sometimes called Old Man Winter, and even Father Winter is the literal original personification of Winter on Earth.  This makes him the Chief Winter God, and Grand Master Of Cryokinesis on Earth. He was worshiped as a God by various human cultures over the ages under different names.  His birth over 650 million years ago triggered a global ice age called the Snowball Earth. He has also usually had some part in subsequent Ice Ages. Often coinciding with some manner of angst in his long often miserable life due to his glum outlook on his existence.  Plausibly due to growing up without parents and spending millions of years mostly alone. As with many Earthly Gods, Jack was born spontaneously via the unintended interactions of various forms of consciousness on a variety of dimensional levels.  The exact catalyst is unknown but it’s plausible he could be the personification of winter even beyond Earth.

Jack came into being long before any humans existed on Earth, and initially, he only had a handful of primordial Earthly Gods, and Goddesses to keep him company since not even Earth Goddess Gaia was born yet! Of course, Primordials and most high-level nature deities often clash and jockey for power positions! However, his cold heart made him prefer to be alone, and not take part in the nature deity hierarchy.  For a time he flirted with Ice Demons, and even demons of Hell during his darkest hours.  Thankfully he was more or less apathetic, and never chose a particular side despite more darkness than light dwelling within his icy soul.  His insanely long life was rather aimless, and without purpose. Something that can sometimes be seen in his angst-ridden blue glowing eyes.

As human culture evolved it attracted his interest, and he became active for a time enjoying the worship, and adulation by primitive peoples.  Although he never gave that love back to his so-called people who quickly grew weary of his harsh wintery ways. Eventually, he grew tired of them as well along with the constant attacks of other Gods who demanded he join their royal higher dimensional regimes.  Jack would often punish people who worshiped his enemies by giving them a particularly dark active winter. Wayward winters he created by easily overriding other Winter deities.

Over the centuries he began to notice the Demi-Angel Santa Claus and became jealous of his Angelic power along with his intrusion into Jack’s paranormal winter territory. Especially the fact that Santa chose to use his powers to help humans, and make them happy by spreading good cheer.  All without demanding worship, or loyalty from them!  Jack Frost attempted to pull a Grinch when he joined forces with the Anti-Claus to destroy Santa, and eradicate Christmas from this Earth!  In the end, Frost was swayed to change sides after engaging Santa in an epic battle of Father Winter vs Father Christmas!

Despite Santa being under 1000 years old at the time, as

opposed to Jack’s hundreds of millions of years old, Santa

was ultimately stronger because Angel abilities almost always trump Earthly Gods. Even with Santa only being a Human-Angel Hybrid.  Of course, he could call upon Heavenly powers for support as well. Including his Archangel Father.  Santa could have easily dispatched Jack with extreme prejudice but he spared his life.  Jack had never been shown such kind mercy nor seen the sorrow that Santa felt over being forced to fight. He implored Jack to join him in his Christmas quest. At that point the Anti-Claus attacked Santa turning the tables.  The Anti-Claus screamed, “Get the hell over here Jack, and help me finish off this bastard once, and for all!” Jack hesitated, and then made his final decision when he instead attacked the Dark Claus driving him away in a snow tornado.  Santa had spared Jacks life, and Jack has saved Santa’s. They came to an understanding, and Jack felt he finally had a purpose.

These were the days before North Pole City existed.  Jack was instrumental in picking the location, and designing the basic supernatural structure of

the most magical winter wonderland on Earth.  He now resides at North Pole City sitting on the city-state counsel as the Winter Manager, and City Planner.  He also owns a few establishments such as Jack Frost Inn, and Frost’s Art Center.  The Art Center is a showcase of his best ice and snow sculptures.  Sculpting is one of the few things that ignite some passion within him.  Something Santa and Mrs.Claus encouraged so he wouldn’t dwell on his dark side. Unfortunately, Jack never became a being who always walks in the righteous light. There is always a black void that will reside in him but there is a mutual respect between Santa and Jack.  Most people know not to aggravate Jack or they end up being temporarily frozen!

Jack Frost resides in a secluded Ice Castle in the Ice Crystal Woods on the edge of Claus Forest near where Frosty The Snowman lives.  Next to Santa Claus Frosty is probably one of the few people he talks to on a regular basis.  The woods are actually huge ice crystals sculpted by Jack’s Cryokinetic powers to look like various trees, and other objects.  It’s his area of North Pole City to let loose his cold creativity.  He has also been known to train talented children who have Cryokinetic abilities.  Although they must be mature for their age because Jack’s patience is like thin ice that can crack very quickly! 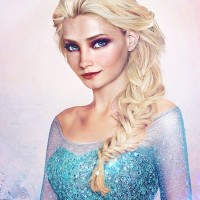 It’s a little-known fact that Disney’s Frozen is based on a true story.  The infamous Snow Queen Elsa was actually one of Jack’s few love interests.  Elsa was a Human born with prolific Cryokinesis powers.  She became immortal courtesy of her Self-Cryopreservation which is one of her many Cryokinetic abilities.  Elsa is considered the top human Cryokinesis masters on Earth! Jack was responsible for corrupting her, and for a time she surely didn’t use her winter powers for good yet she was never evil! She eventually saw the light, and they parted ways on icy terms.  Although in the present Elsa has forgiven him, and does thank him for helping her control her cryokinetic powers that were once extremely erratic.  Unfortunately, Jack remains bitter over the break-up and attempts to rekindle their romance every decade or so. 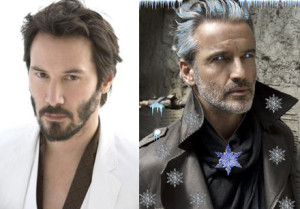 Elsa doesn’t live at North Pole City but rather her ice castle in the secret supernatural Kingdom of Arendelle located in Norway.  She visits Santa Claus quite often as a welcome member of the righteous paranormal community that battles the forces of

evil. On December 26th, 2015 she appeared at the North Pole and met fellow Immortal, the actor Keanu Reeves. He was visiting there for the first time and really hit it off with Elsa.  They began dating and are often considered the premier couple of love when they visit.

Keanu and Elsa were holding hand while strolling about the pine woods strewn with colorful Christmas lights on the edge of Downtown North Pole City.  Jack was already in a bad mood as he usually is when he heard about his former love Elsa visiting Santa.  Frosty The Snowman was with him trying to cheer Jack up as they happened upon Keanu & Elsa. The lovebirds were giggling as they lie next to each other making snow angels. Jack had angry words with Keanu.  Once Jack insulted Elsa Keanu had no choice but to defend her honor, and he engaged Jack in hand to hand combat.  Jack has pride and didn’t resort to his powers at first.  Even with his paranormal strength, he was quickly overtaken by Keanu Reeves lightning fast Kung Fu powers acquired over several centuries of existence as an Immortal.  Jack ended up on the ground as his face turned beet red in sheer embarrassment. That crimson-hued embarrassment changed to a rage that made his face turn bright blue like a Smurf! He sprung up causing heavy winds, and even a snow tornado to fly forth! A blizzard reigned down an insane torrent of snow and hail! Frosty knew what was about to happen, and tried to intervene but Jack blasted the helpless Snowman into snow dust….fear not for Frosty reanimated minutes later!  Jack then shot an ice blue glittering snowflake ray from his hand freezing Keanu Reeves like a stone statue!

Her love Keanu helplessly encased in ice prompted Elsa to attack Jack in a righteous rage!  Elsa is kind of like Jack’s Kryptonite because she warms his heart causing his icy powers to decline considerably.  So the battle was somewhat even.  Some Snow Nymphs and Mystic Investigations very own resident witch Rebecca Abernathy entered the fray of this icy battle royale in an attempt to halt it!  Some Elves even showed up to protest Jack overriding their weather control machine to dangerous ends. The attempts

to stop Jack failed miserably until Santa intervened, and literally froze everyone in place via his Angelic Chronokinetic time manipulation powers.  He then utilized his stern yet loving fatherly warmth, with the Spirit Of Christmas in hand, to broker a truce between all parties.  Jack Frost begrudgingly unfroze Keanu, and apologized to both Keanu, and Elsa, before retreating to his ice castle to silently sulk in shame.  Santa was very apologetic as well since he prides himself on North Pole City being the safest, and most friendly place on Earth! He promised Jack would behave for the rest of Keanu’s stay!

Santa then placed his healing hand upon Keanu’s forehead to cure the migraine headache he got from being frozen solid! Father Christmas eventually disappeared for a time to visit Jack and had a long talk with him.  Later in the evening Elsa & Keanu were seen chuckling, and whispering sweet nothings in each other’s ears while shopping at Ernie Elf’s Enchanted Emporium on New Year’s Day 2016.  They ended up having dinner at Santa’s house.  Elsa helped Mrs.Claus in the kitchen, and prepared her fabled fabulous frozen ice cream cake for dessert!  Days later Keanu flew back to Hollywood out of Saint Nicholas International Airport, and Elsa whisked herself away back to Arendelle in a wondrous whirlwind of sparkling snow across the Atlantic Ocean. However, it was reported she briefly stopped in the undersea Kingdom Of Atlantis to visit a Mermaid friend named Ariel.  🙂

UPDATE: The happy couple was seen on Valentines Day 2016 at Elsa’s Ice Castle in Northern Norway by various members of the supernatural community! They also reappeared at North Pole City in late December of 2017 and 2018. Unfortunately, if the happy couple ever marries the mainstream world can never know about it! 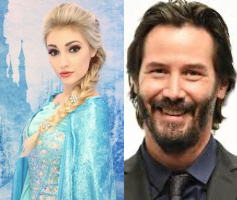 1 Response to Who Is Jack Frost?