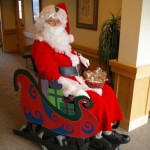 Despite being a Demi-Angel Santa Claus can be injured.  Especially by his notoriously evil brother the Demi-Demon Anti-Claus who recently managed to resurrect himself from the purgatory of the Underworld he was trapped in.  This is exactly what happened on Halloween at the Devil’s Pentagram in Kazakhstan.  There the First Battle Of Armageddon took place at the site of the Devil’s resurrection.  Santa Claus bravely saved all the human sacrifices by sending them into a porthole that whisked them away to his North Pole Village out of harms way.  They spent nearly a Heavenly week there, and will have their memories wiped of all supernatural events before being returned to their homes. Unfortunately after saving the hostages his dastardly brother skewered him in the back, and out his chest with a sword lit ablaze with unholy fire.  The sword itself is theorized to be made of a rare material mystically charged to hurt Angels because unholy fire alone wouldn’t have been enough to injure Saint Nicholas to that extent.  The fire itself might be a magical component of the unholy sword.

The Anti-Claus’s intent may have been to turn Santa into ash but thankfully Mystic Investigations Xavier Remington, and Drake Alexander challenged him to a sword fight.  This forced the Dark Claus to remove the sword from his saintly brother to engage the supernatural warriors.  Luckily both brave men vanquished the Anti-Claus with their own mystical swords.  However his blood set off the breaking of the seal that resurrected the Devil himself.  It is believed that the Dark Claus’s body was absorbed into the Devils who now walks the Earth while the infamous Sorcerer Dimitri Diablo reigns as the new King Of Hell.  Since the Anti-Claus has been destroyed so many times only to return we probably haven’t seen the last of him.

We just placed a mystical call to Santa, and he says he’s almost healed after the cowardly attack.  The Great Claus said,”Don’t worry Demi-Angels are quite resilient, and Mrs.Claus is taking good care of me!”  He expects to be at 100% of his Angelic power by Thanksgiving.  Not only is it extremely hard to injure a Angel Human Hybrid but even if you do they heal almost instantly due to the awesome healing powers they possess.  This tells you the danger of this weapon wielded by the Anti-Claus.  A weapon that can injure Angels which conveniently disappeared on the battlefield.

Santa Claus also discussed the discovery of the secretive leader of Halloween.  Shala an Angel-Demon Hybrid who rules Halloween to insure a proper balance between good, and evil.  Despite the bounty on her head by both Angels, and Demons who consider her an abomination, Santa says he would like to meet her, and work with her as he does with the other leaders of the supernatural holidays.  Santa has always been a rebel in the Heavenly community yet respected.  Although he has ruffled more than a few Angel feathers with some of his choices along with skirting the lines of the Supernatural Secrecy Pact.

How Can Santa Claus Be Injured?