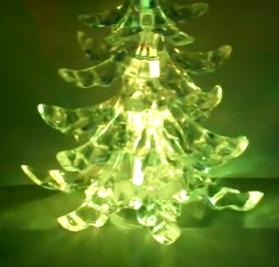 The Christmas Crystal is, in essence, the supernatural power conduit for the very Spirit Of Christmas itself.  It’s the physical manifestation of Christmas itself next to Santa Claus of course. This powerful paranormal crystal channels the Demi-Angel Santa Claus’s pure consciousness along with the human collective consciousness, and the consciousnesses of all good supernatural beings.  The crystal absorbs this massive amount of positive energy and then distributes it by the wondrous will of Santa Claus.  It fuels the Spirit Of Christmas that instills feelings of selfless giving, and peace among humans open to receive it.  It also distributes paranormal power to good supernatural beings calling upon the power of Christmas & Saint Nicholas. The Crystal also has the additional task of powering North Pole City and all the magic that lies within.🎅

The Crystal Of Christmas was originally a large Angel Aura Quartz Crystal Cluster.  Angel Aura Quartz is an extremely powerful translucent crystal sparkling with iridescent rainbow colors.  It’s said to be created anytime an Angel manifests on Earth.  This particular stone was created by Santa’s Archangel father Sarandiel.  Saint Nicholas truly created global Christmas when he fashioned the crystal into the shape of a Christmas tree and blessed it as holy with his Demi-Angel Enochian magic.  The Christmas Crystal is considered one of the most holiest known objects on Earth due to its blessed contact with an Archangel, a living Saint, and also the Magi who were present at the First Christmas!  So holy in fact that anyone touching it who is not pure of heart would turn to ash instantly!  Basically, that means only Angel based beings, and innocent children can hold the crystal.  Theoretically, animals can make contact with it as well.😇

The Blessed Creation Of The Christmas Crystal

Santa also affixed a gold star at the top of the Crystal.  A mystical 24K gold star originally created by Santa as a small boy for his mother Marcia.  It contains the magical innocence of Santa’s childhood within it, and it’s what keeps the awesome metaphysical energy equivalent of a trillion suns bottled in the crystal. It also ensures even regulated distribution throughout the world.  This enormous enchanted energy makes it the greatest potential doomsday device on Earth.  If it ever fell into the wrong hands, and the energy was released all at once the entire Earth, Sun, Solar System, and even nearby stars would explode into nothing from the Milky Way Galaxy forever! It would make a Supernova look like a Sunday picnic.  Don’t worry because this is highly far-fetched due to the many redundant supernatural security protocols in place!💥

The Paranormal Protections For The Crystal Of Christmas

The sacred Crystal Of Christmas is located in a secret underground Arctic cavern made of Natural Quart Crystal Clusters.  It acts as a magnifying satellite, and a supernatural electrical grid of sorts sending out the Christmas Crystals psychic power. At the same time, it receives the positive energy of beings from around the world in a way that won’t tax the crystal into shattering.  The Crystal Christmas Cavern is guarded by two Enochian Witches dressed in glittering white robes at the entrance.  Witches from Santa’s Enochian Angel magic coven who take turns guarding the cavern 24-7.  Within the cavern itself an enchanted Abominable Snowman, aka Yeti, is the last defense against any unwanted intruders.  For the most part, Abominable Snowmen are genetically bred with darkness in their hearts. However, Santa took one and purified him by channeling the pure soul of Frosty The Snowman through the gargantuan furry white beast.  Now he is the only holy Yeti on Earth who also contains the highest level of sentience for such a creature.  The Yeti is immune to magic and is far more powerful than others of his kind.  A friendly enchanted polar bear and penguin often keep him company on his guard duties.🐧

The video below was captured by Mystic Investigations bionic boy wonder Zack Powers with Santa standing nearby. Santa created a protective paranormal shield so the film wouldn’t be distorted by the massive electromagnetic field.  As a teen, Zack still has just enough magical innocence to withstand being near the consecrated Crystal Of Christmas.🧐