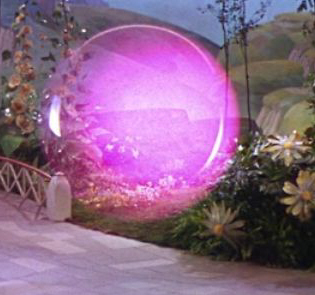 The Mystic Sphere is a known active paranormal power passed down genetically through lines of Sorcerers, Wizards, Warlocks, and Witches.  Although it is most prevalent in Witches.  In particular Mermaids who possess natural magical casting abilities. One known individual to possess this awesome power is Rebecca Abernathy, a half-mermaid witch who operates out of a paranormal investigations firm called Mystic Investigations.  When someone possessing the supernatural sphere calls forth it’s name, it appears around the person as a clear spherical shield of metaphysical energy.  Generally the coloring is neon blue for males, and neon pink for females.  However the coloring can vary based on ones own personality.

The Mystic Sphere acts as a defensive energy shield against magic, and other paranormal forces including limited repellent powers against non-corporeal beings such as poltergeists. I can of course deflect various projectiles such as small rockets, bullets, spears, etc.  The sphere’s master can also allow others to enter it’s protective bubble.  It can also be used as a weapon when rapidly expanded.  To expand it’s size takes great power, and practice.  Accomplished masters can also call forth other Mystic Spheres independent of theirs, or micro sphere within their hands which can be launched at adversaries to repel or trap them within.  In addition the Mystic Sphere also has the power of Transvection, aka Levitation, which allows the practitioner of magic to soar high into the air well above the clouds.

The Sphere Can Be Space-Worthy!

In 2011 Rebecca Abernathy became the first recorded case of a Mystic Sphere traveling into the void of outer space when she was forced to pursue extraterrestrials to the Moon.  The super sphere provided full protection against space radiation, extreme temperatures, space debris, and intense solar light.  She also had plenty of oxygen.  Far more than could have been trapped within the enchanted energy ball.  This suggests that it protects occupants from all dangers even if it means magically producing oxygen or some natural mix of Earthly air.  However all this may be due to Rebecca calling forth the awesome power of the Heart Of The Mystical Forest which may have supercharged this particular extraordinary Mystic Sphere!