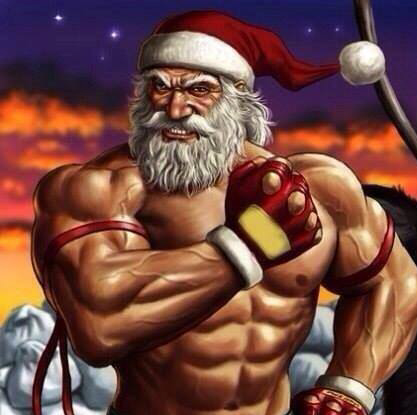 Santa Claus has fought his fair share of evil supernatural beings. Not surprisingly he finds a lot of people in paranormal trouble on Christmas Eve as he flies around the world delivering pretty presents, and good cheer. This includes his infamous dark twin The Anti-Claus, and of course blasphemous blood-sucking vampires. He doesn’t enjoy taking down these creatures as he loathes violence of any type. Especially when they are former humans like vampires. However, he must do what needs to be done in order to protect innocents from that which lurks in the dark shadows. Everyone thinks it’s impressive he can expedite package delivery in one night. Although, he’s also stopping multiple times in between to help people along with brief conversations with friends he runs across. It’s the price of having Angel based psychic abilities, super hearing, and a full array of other enhanced senses! One fateful Christmas Eve in 1966 Santa saved an entire family from a gang of bloodthirsty vamps looking for nothing but instilling terror in the hearts of those with the Spirit Of Christmas in their hearts!🧛‍♂️

As Santa merrily flew across the starry skies in his red shimmering sleigh full of glittering gifts he bellowed, “Ho ho ho Merry Christmas!” It’s said only animals, small children, the pure of heart, supernatural entities, true believers, and a handful of others can actually hear this. He descended upon a small town in Wisconsin to begin his deliveries when Rudolph The Red Nosed Reindeer declared, “Golly gee whiz Santa I smells vampires!” Santa concentrated his own super sniffer to the ground below along with perking his ears up. Suddenly he heard a woman screaming for help, and commanded, “Rudolph down we go to exact sweet justice, and save the innocent!” The two little helper Elves sitting in the back braced themselves as one muttered, “Oh my! Vampires are scary as can be!” The sleigh landed in the backyard that was covered in a half foot of snow. As he hopped out he told the Elves to stay hidden for their own safety. Santa stomped to the back door and kicked it in totally off its hinges. He strolled into the living room to find seven vampires terrifyingly toying with a family of two parents, a grandmother, and four kids. The father, mother, and grandmother had been bitten into. Blood was dripping from their neck! They were still alive crying in horrifying disbelief that vampires actually existed! All the kids were under 12 and had yet to be feasted upon by the fiendish pack of blasphemous beasts. Most likely because the innocent magic within kids can be poisonous to vampires. Only extremely powerful ones can withstand drinking their blood.

Santa startled everyone including the vampires as he screamed, “Let these innocent people go you unholy abominations!” The vampires stared in disbelief at first as they gazed upon the towering white-bearded figure of the tall heavy set Demi-Angel. Suddenly they all started laughing assuming it was just some old guy in a Santa costume. Only royal vampires and their top-level associates would know Santa Claus is real.  A female vampire sped in from another room making it eight vampires. She ripped off Santa’s coat to reveal an extremely muscular man complete with six-pack abs. Everyone gasped at his magnificent body as the female vampire attempted to bite into him. Unfortunately for her, she had her fangs snap upon his steel skin. She screamed in pain as Santa tossed her aside, and faced the rest of the vampires who descended upon him growling as their eyes glowed crimson in anger. The nearest male vampires yelled, “You’ll make a fine meal old man!” Under his breath, Santa muttered, “Forgive me sweet Lord for what I must do!”🧛‍♀️

The kids ran out of the room as the parents, and grandmother staggered away more slowly. The only path not blocked by vampires, tossed furniture, and other damage was up the steps to the second floor. There the family hid in the locked bathroom. Santa easily punched and kicked the vampires off him. Then they all came at him with super lightning speed! All eight, including Miss Fangless, had dog-piled on top of him! It looked like the battle was done until a ferocious growl echoed throughout the house. Santa shot up causing vampires to fly all over the living room. One he held upon his shoulders before grabbing his leg with one hand and swinging about wildly right into the blazing fireplace where he disintegrated into ash instantly. Vampires and fire never get along well!

Santa could sense the elevated evil in all their demonic hearts. He knew there was no possibility of salvation for these malevolent monsters. He reluctantly realized it was time to slay these cruel rabid animals for the greater good of humankind. He pulled out his lucky silver stake and got down to business. He plunged the stake, blessed by his Archangel father Sarandiel, into each successive vampire’s heart with deadly force! Each one proceeded to burst into unholy violet colored flames before becoming an ash pile on the living room carpet. One managed to kick the stake from his hand, and Santa punched his fist straight into his chest pulling out his little dark heart! Once he crushed it in his hand the vampire lit up like a Christmas tree with black ash bursting everywhere.🔥

The last vampire quaked in fear while holding his shaking hands out in front of him, “W-w-w-what-What in the hell are you?” Santa replied, “I’m the son of an Archangel who walks the humble path of righteousness in the light of the Lord.” The vamp then responded, “Hey man it’s cool! I’m seriously sorry! I’m just going to leave, and we can forget about this whole thing!” Santa shook his head no as he grabbed him by the collar. Santa got a psychic vision of the vampire killing hundreds of people over the course of the next 300 years!  He then told the sniveling bloodsucker, “Your nightmarish existence of unrestrained bloody darkness has come to a close my sinister son! Do you have any last words.” The vampire angrily screamed, “Rot in hell bastard!” Santa then said, “That is a place you shall know intimately within the next five seconds!” Santa opted for a more humane method of vampire eradication by placing his other hand on the vamps forehead while chanting, “By the power of the Spirit Of Christmas I banish you from this Earth!” A bright white light burst from Santa’s hand engulfing the vampire. He immediately turned to an unusual burst of white snowy ash, and never even lit on fire.

Santa surveyed the room now littered with black ash. Suddenly Rudolph peeked in with his nose lit red. He cautiously uttered, “Everything all right in here Santa? The other reindeer told me to check on you.” Santa replied, “Oh, of course, all is well now my little friend!” A ninth vampire had been down the block and joined the party way too late. He came up behind Rudolph biting into his neck, and diving his fingernails into his throat. Santa was beyond alarmed as poor Rudolph bellowed in agony, “Oh holy peppermint sticks!”  The extremely enraged vampire sensed his friends were all dead, and he laughed maniacally amid declaring, “This freakish deer is dead old man!”  Santa commanded, “Fly Rudolph!” Rudolph levitated speedily into the ceiling sending the vampire through the plaster, and up above the roof over the house. The vampire fell off on to the roof and slid into the snow on the ground in the backyard. A bloodied Rudolph landed nearby with his red nose flickering erratically indicating physical distress. Rudolph then said, “Get him, guys!” The other eight reindeer stomped the hell out of the vampire!🦌

Santa came out the back door as Rudolph limped over touching the vampire in the heart area with his nose of holy light. The vamp screamed in agony, burst into fire, and left an ash pile behind that caused Rudolph The Vampire Slayer to sneeze! Santa laid glowing yellow hands upon his faithful reindeer immediately healing all his wounds. The reindeer got back into pre-flight position to prepare to fly away. Santa ordered the two Elves to make repairs to the house posthaste. Elves are speedy supernatural workers who can build or fix anything a hundred times faster than a human! Meanwhile, Santa went to check on the family who had been terrorized by the denizens of darkness he had dispatched with distinction!

Santa Claus found the family shivering in fear huddled together in the bathtub. As he pulled back the shower curtain Santa’s fatherly Angelic smile was like a warm ray of sunshine upon their very soul. He crouched at the side of the tub assuring them all would be well. A little girl asked him if he was really Santa Claus, and he said, “Indeed I am the Father Of Christmas. Fear not ever again for you are now under my eternal protection.” The Great Claus waved his hand slowly while softly whispering that the entire family forget what happened that night. They all passed into a pleasant slumber with delightful dreams of sugar plum fairies. He then used his angelic healing powers to make all well again. Not even a nick was seen upon their necks. Santa gently lifted each one up into his large muscular arms and placed them in their beds. He paused a bit in one of the boy’s rooms where the Elves were finishing the repairs on the roof.

The Elves sped around like little blurs cleaning up things as Santa brought the family Christmas tree back to full splendor. He got some gifts from the sleigh and placed them under the tree with great care.  The Elves completed their tasks and stood beside Santa in the glow of the hearth as he blessed the home in the name of all that was holy. Never again could vampires and a variety of other nefarious entities gain entry to the home. Even if inadvertently invited in. They left out the back door making sure it was locked securely. Once in the sleigh Santa Claus bellowed gleefully, “On Dasher, on Dancer, on Prancer and Vixen. On Comet, on Cupid, on Donner and Blitzen! Fly to the sky Rudolph! Merry Christmas to all, and to all a good vampire free night!” Away they flew into the cold starry skies to bring Christmas cheer all the world over!🎅