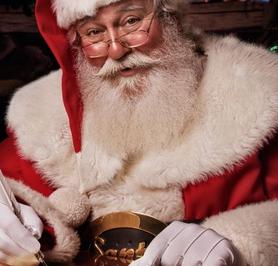 Most in the supernatural community that walk the path of the light look to Santa Claus, one of the most powerful beings to exist, as the shining beacon of hope on Earth, and the symbolic leader of all that is good.  Although he doesn’t have an official hierarchical organization that manages all the many thousands of individuals who fight against the forces of supernatural evil.  Many in the supernatural community were shaken by the serious injury of the Demiangel Santa Claus on Halloween at the hands of his evil identical twin brother the Demidemon Anti-Claus.  Despite the fact that it’s happened before because both men are just about equally matched as witnessed in their infamous Hawaii battle.  Most notably on December 6, In 343 AD when Santa was slayed by his brother Claude Claus, the Anti-Claus.  Thankfully he was resurrected as a force of good who brings peace, and joy to the planet where ever he can.

Some have asked how a Demi-Demon, being considerably weaker than a Demi-Angel, could possibly injure the Angelic Claus.  If it was any other Demidemon that would be the case but the key is the fact that Santa, and Claude are identical twin brothers.  Two halves of the same coin.  This means Santa’s life force is linked to Claude’s.  So the Anti-Claus gets a supernatural power boost at the expense of Santa.  This is an example of the Universe seeking to acquire a state of perfect balance.  So the Anti-Claus is the most powerful Demidemon on Earth.  However if the Anti-Christ is ever born he will push Claude to second place since anyone fathered by the Archdemon Devil will always be more powerful than any other being sired by another demon.  There’s also the fact that the Anti-Claus, and Santa have the same Archangel Father Sarandiel.  It was only after being raised by evil step-parents that the Dark Claus’s DNA descended into demonic form.  Just as a fallen Angel can evolve into a Demon.

Since Saint Nick, and Claude are twin brothers does that mean they’re the same person?  In the paranormal community we know that identical twin siblings are in fact the same person who come from the same soul.  In essence the twins have the unique experience of actually knowing themselves from the outside rather than only looking inward to themselves. Before the Anti-Claus became Demonic he, and Santa were in fact the same person of one human soul.   The transition into Demidemon caused the birth of a new person.  However they still share a common life force bred from ties of their common birth at the hands of their human mother, and angel father.  This unique life force took the place of their common soul and equalizes them. If one dies then the other acquires the powers of the other.  For instance when Claude vanquished Santa he became twice as powerful until Saint Nicholas’s resurrection.

The Souls Of Angels, Demons, Humans, And Their Hybrids 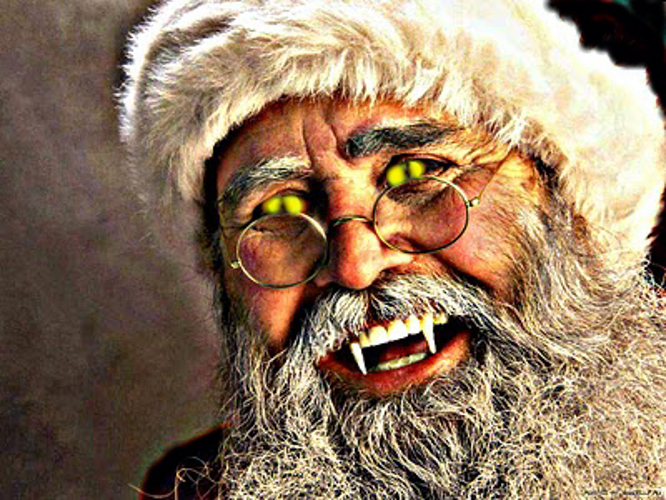 Their shared supernatural life force is the result of a human soul, that of the Angelic, and their special twin births.  Obviously humans have higher dimensional Heavenly souls, and Angels of the Lord live in Heaven.  When an Angel manifests completely in our reality they are totally here.  There’s no soul hanging around Heaven.  This of course makes them quite vulnerable to permanent eradication while here.  Standard Demiangels have a human soul in Heaven.  It would technically be called half a soul but there’s no such thing as that so it’s complete.  What would be the other half of their soul is actually a direct link to their Angel parent.  When Santa Claus was in Heaven he was a human soul but his father bestowed Angel status upon him.   When Santa was resurrected his soul reverted back to full human.

When a Demon manifests here in a complete form they are totally here as well. There’s no soul hanging around Hell.  This is why Dimitri Diablo rules Hell now that the Devil walks among us.  So if someone could destroy the Devil while he’s here then that would be the end of him.  In the case of Demidemons half of them is linked to their demon parent, and their human soul is so generally warped that it actually descends into Hell to become a demon form.  A form that can’t take complete sentient shape until the demidemon dies, and their parent manifests them into a full fledged Hell demon.  If by some fluke a Demi-Demon ever saw the light, and became good then their soul would ascend back to Heaven.  However it’s not a given that their Demonic DNA would revert to angel form since their Demon parent is deeply linked to them.  This is similar to why a good vampire doesn’t get rid of their demonic DNA.

In the case of the Anti-Claus, his father is an Angel, but his DNA collapsed to Demon status.  With no Demon father Claude retains the demon half that should be the link to his father which was cut off once he fell from grace.  With Santa Claus retaining the human soul in Heaven there was none to descend into Hell.  So the Anti-Claus’s human half is soulless while his demonic half is his own as well with no link to any demon.  Even without that he has a deep allegiance to the Devil who he often calls his father.  In the past when the Anti-Claus has been supposedly destroyed he always ends up coming back to life at some point.  This is due to the common life force shared with Santa Claus.  If not for this then Claude Claus would be vulnerable to total eradication from existence with no higher dimensional soul in place.  With Santa alive Claude simply ends up going through unusual transitions before eventual resurrection by unknown means, depending on the method of death.  Such as his absorption into Mother Earth which eventually led him to manifest in the Underworld.  Or his recent apparent absorption into the body of the Devil.

All this means that the Anti-Claus can never be eradicated.  The only way to defeat him is to turn him to the forces of light, and goodness thereby causing his DNA to revert back to Angelic status.  At that point he would become a real identical twin to Santa, and Claude would indeed be Santa as he would share a soul with him again. The entity then known as the Anti-Claus would finally cease to exist!  This seems to be an impossible task but a miniscule glimmer of goodness has been seen at times when the Dark Claus comes in contact with Santa’s wife Holly Claus.  Perhaps he feels some bit of love for his Sister-In-Law, and this could be used to turn him back to the light.  Then someday Claude can take up residence at a South Pole Village analogous to Santa’s North Pole Village in order to lighten Saint Nick’s Christmas load, and manage the holidays in the Southern Hemisphere.   Merry Christmas to all, and may the calamitous Claus perish from this Earth for all eternity!