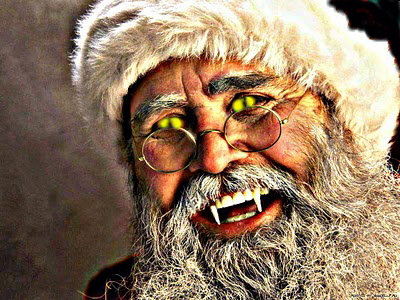 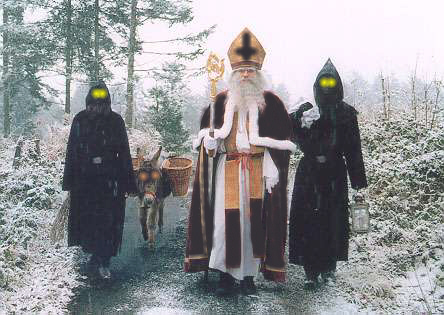 On longest night of the year after the Winter Solstice these denizens of darkness look forward to one of the most evil and powerful entities on Earth paying them a visit. Their hope is to be rewarded with dark gifts that can include paranormal powers for the evil they worked hard to spread throughout the year! This entity is known as the Anti-Claus whose full name is Claudius Claus. Usually called Claude Claus since the 17th century. He is in fact the long lost evil twin brother of Santa Claus who was given up not long after his birth. Unlike Santa he was raised by horrible abusive foster parents deep into the black magical demon worshiping arts. He did not know for a long time who his brother was but once he hooked up with powerful diabolical forces in the paranormal community, he learned who he really was and what his dark destiny would be!

What A Difference Evil Environment Can Make Over That Of Angelic Genes!

Santa(aka Nicholas) & Claude’s dad was an angel named Sarandiel who took Earthly form for a time and married their mom Marcia who was human. With Heavens rare blessing he fathered the twin Claus babies in 270 AD making the Anti-Claus 1,749 years old. Angels who mate with humans and also have Heavens blessing often produce twin offspring. Since they were half angel they became Demi-Angels rather Nephilim that are the product of unblessed unions. Unfortunately their Angel father was called back to Heaven by God leaving their mom alone. Raising one child as a single mother in the 3rd century AD was hard enough especially with social stigmas. Then a mysterious soothsayer convinced Santa’s mom that Claudius was an evil spawn that must be cast from the pure golden child that he claimed Santa was. Their mom left Claudius on the doorstep of a church at Midnight on the night of the full moon on the winter solstice. However a sinister unmarried couple had been watching nearby as they stole food from a street market. They snatched Claudius for themselves thinking he would make a fine little thief and servant child. The couple themselves were unable to conceive a baby of their own. It is thought the soothsayer had a hand in the couple being there. Read The Rest Of The Dark Claus Tale Of Terror On Our Main Website…