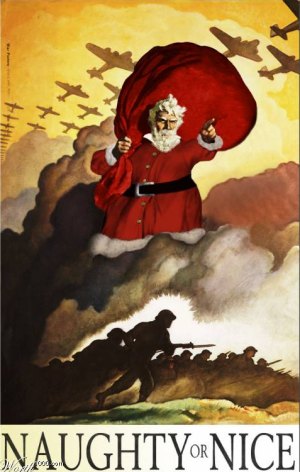 We asked the Demi-Angel & Saint Santa Claus about any role he would have in battling the forces of darkness.  All he would say is that he would not let any children be harmed during the great Biblical battle of Armageddon?  So clearly he will be hip deep in the greatest war ever fought!  He is currently looked upon as the de-facto leader of good on Earth.  Although he has never declared himself as such despite being the highest profile person of Angelic lineage on Earth. Many in the paranormal community look to him for guidance, and leadership in these uncertain times of gloom, and doom looming overhead.  Santa states that Jesus Christ, Son Of The Omniverse God, will lead the charge from the Heavens above in the final war of good vs evil on Earth.  Various Archangel’s, such as Michael, will act as holy generals on Earth as they send their Angelic troops into battle against the demons led by the Devil, and his unholy son the Anti-Christ.  These Angelic forces are also expected to take on the other factions of Armageddon including the Earthly Gods, Jinn, and a number of other groups battling to win over the Earth, and humanity.

Along with protecting the kids he might have his hands full with his evil twin brother the Anti-Claus, a Demidemon, who has his own aspirations for global domination!  Their rivalry has been brewing for centuries, and it’s safe to assume that they will engage in mortal combat to decide the fate of Christmas, and Dark Christmas future.  Santa has always been a rebel of sorts who has skirted the fine lines of the Supernatural Secrecy Pact.  Some in Heaven have not always approved of his interactions with humans, and the world of the supernatural as well.  However his status as Saint Nicholas gives him a certain leeway as is the case with other Saints such as Patrick. In our opinion we feel as if he wouldn’t be perfectly aligned with the Heavenly forces during Armageddon due to his acceptance of all beings of goodness even if they have demonic DNA.  This includes vampires, werewolves, and many other entities touted as being evil merely due to their paranormal DNA.  Santa has also welcomed various winter deities, such as Jack Frost, to his North Pole City. Certainly Angels have never gotten along with nature deities who they see as usurping their supporting roles as managers of the Universe.

Santa Claus is a figurehead who could truly unite the Earth in peace, and defeat the forces of evil.  A larger than life man of wisdom who could finally bring all the warring supernatural factions together in harmony. Of course he must first deal with those who refuse to listen to reason! Expect to see his sleigh, and enchanted reindeer flying through the air shooting forth a volley of magical fireworks in the midst of the final supernatural showdown!

Update: The above article was originally posted in February of 2013. Later that year Santa Claus indeed fought in the First Battle Of Armageddon on Halloween of 2013! In addition he sustained injuries at the hands of the Anti-Claus!