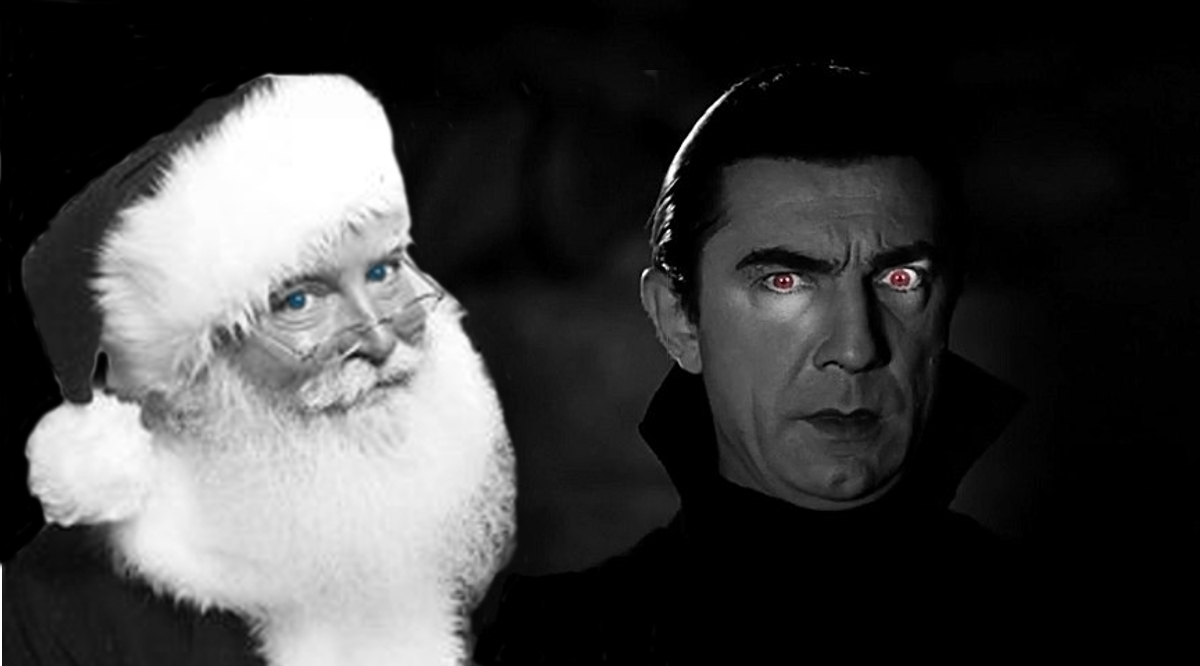 ‘Twas Christmas Eve of 1888 when Santa Claus found himself delivering gifts to the good little boys and girls of Transylvania, Romania. Santa landed his sleigh upon the roof of a modest home with smoke billowing from the chimney at the Witching Hour. He teleported down right into the flames of the hearth that kept the home warm on this especially chilly night.  Santa walked out of the flames without so much as a spark touching his suit and boots. He strolled over to the Christmas tree with his four-dimensional bag of toys. Two for the little boy and girl who slept soundly down the hallway. Also one for the recently widowed mother in need of much cheer.

Just as Santa was about to go back up the chimney he felt a dark presence afoot. His Angelic senses told him there was something unholy in the bedroom at the end of the hall. He crept away from the lit heart into the darkness cautiously. The door to the bedroom opened with a creak as Santa witnessed a well-dressed vampire hypnotizing the mother lying in bed. The vamp turned around with surprise as his eyes glowed red with anger. His hypnotic gaze swept away from the woman causing her to scream in terror. Santa stomped toward them and demanded, “Unhand that woman, you filthy fiend!” The vampire rose forth and exclaimed, “You shall die this night sir for you have disturbed my meal!”

The vampire forcibly grabbed Father Christmas and launched him across the room causing a wood dresser to smash into pieces. The vampire laughed maniacally while saying, “I shall drain your rich blood. It smells of unique immortality. What manner of being are you?” Santa leaped up and replied, “I’m the Demi-Angel Santa Claus and who might you be?” The vampire chuckled in disbelief even as Santa’s eyes glowed blue. He then said, “There’s no such thing as Santa! I’ll be doing you a favor by taking your life as you are not well in the head. It shall be an honor to die by my hand for I am Dracula!” Santa punched Dracula in the face causing him to fly to the other side of the room breaking the window. The woman rested in bed frozen in fear watching the spectacle in disbelief. Thankfully, the children remained fast asleep as the Spirit Of Christmas infused the home. This by Santa’s hand thus keeping them in sweet slumber dreaming of sugar plum fairies.

Dracula, a powerful second-generation vampire with The Gift of magic, levitated toward Old Saint Nick while shooting some manner of glittering green energy from his hands. It had no effect on Santa so Dracula returned to brute force. Mutual punches and kicks were exchanged for a minute or so. Finally, Dracula sunk his teeth into Santa’s neck only to find his fangs snapped clean off! It was as if he bit into steel! Dracula screamed in agony clasping his hands to his mouth. Before Santa could get hold of him again he vanished into ashen vapors that then transformed into a squealing bat. The bat flew out the window into the Moonlit night. Santa then turned to the woman and said, “Now that’s something you don’t see every day!” Father Christmas knelt at her bedside and utilized his own hypnosis to make her forget everything and fall into a deep sleep.

Three little Elves skipped into the room as they heard the commotion from the sleigh on the roof. Santa told them about Dracula and implored them to repair and clean up the mess. He helped as they all moved about at super-speed returning everything to proper order within five minutes. Santa then restored the Vampire Invite Spell to the house. Clearly, the woman had invited Dracula in at some point. Probably earlier in the day posing as someone else. Dracula can walk in the sunlight without fear of burning up! Santa also placed additional holy protections on the dwelling. The merry band hopped into the sleigh and took off for the next house. On a roof nearby Dracula stood watch and silently declared, “Oh, Mr. Claus I will have my revenge against you!’ Now over 130 years later Dracula still hasn’t made a move against Santa! Perhaps he’s just waiting for the perfect moment?