That Time A Russian Submarine Shot Up Into North Pole City

Despite North Pole City being magically cloaked, there’s always the danger of a submarine popping up through the ice by accident! Something like the video above featuring a US Navy sub. After all the Arctic is simply a frozen ocean, unlike the Antarctic Continental land mass. It almost happened in the 1990’s with a US Navy sub but luckily a group of enchanted Narwhals nudged them just out of the way! Some years later in the mid-2000’s it finally happened when a Russian navy sub ascended below the Christmas Capital’s downtown. Its first attempts to surface failed as there was actually a sizable mystical soil bed and cobblestone street beyond the ice layer. It caused what seemed to be a decent Earthquake sending Elves, some visitors, and one reindeer running away in a panic! 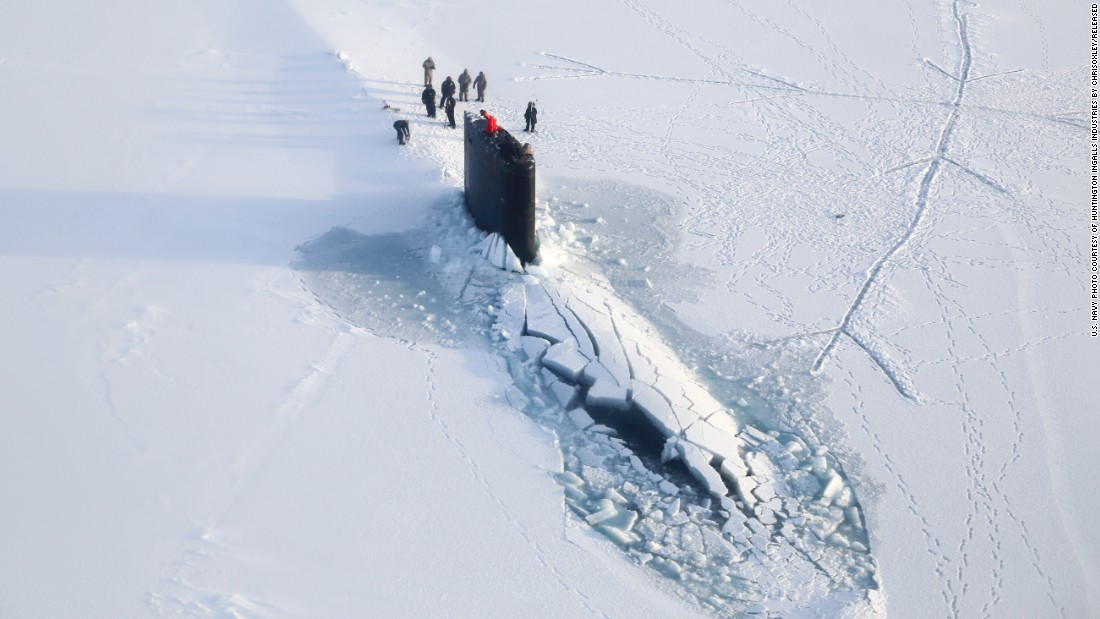 Santa Claus and the top technical Elves entered North Pole Defense Command as the bells tolled warning all in hearing distance. They discovered it was a submarine causing the commotion. The Christmas crew crossed their fingers hoping it would pass. However near the edge of the city just before the grand glimmering glacial wall, it shot up through a weak spot where only ice and snow existed. Russian soldiers immediately exited to remove ice chunks from the majority of the vessel. Only the bridge fin or sail of a sub bursts from the arctic ice in most cases. The men, however, became mesmerized by their surreal surroundings that included the glimmering white ice wall around the entire city. The skies clad with the Christmas Star and unusual Aurora not seen outside the sainted winter wonderland. And of course the quaint Christmas village in the distance along with a pine forest. The Captain and the rest of the crew exited in awe at what they were seeing. A crewman took out a camera and began recording. It seems Santa and the North Pole would be exposed to the world as finally being real!

Exposure is not an option under The Supernatural Secrecy Pact. A paranormal pact created between the Universal Powers That Be. It leaves most of humanity in the metaphysical darkness of ignorant bliss. Something that’s a blessing when it comes to monsters and other things that go bump in the night. Unfortunately, it also includes good things like Santa and the Easter Bunny! Santa Claus has been tried more than once under the pact but fortunately never convicted! Charges brought about by demonic factions like the Anti-Claus and his minions!

Santa and his Elves scrambled to salvage the situation. Before they got there Frosty The Snowman was the first on the scene. He bellowed forth,”Oh me oh my! Merry Christmas boys! Welcome to North Pole City!” The soldiers just stood there silent with their mouths open in disbelief. No one even thought to draw their arms on this fantastical animated snowman. Frosty stood silent after that with a goofy smile on his face amid the awkward silence. Jack Frost strolled up and said,”Holy sh….” Naturally, a some sleigh bells inexplicably sounded out of thin air blocking out Jack’s entire colorful metaphor courtesy of a city wide naughty word censor spell. It was that moment when Santa and his Elves marched up.

Santa cleared his throat and gave Jack a stern look over releasing an expletive in the presence of innocent Frosty and the Elves. Santa spoke to the Russian military men and declared,”Gentlemen I am Santa Claus and as Frosty said welcome to North Pole City. I know this must be a shock to realize much of what you’ve read about me appears to be real but I implore you to leave for your own safety. Upon doing so it will seem like a dream. To facilitate that false narrative under the Supernatural Secrecy Pact I must utilize a spell to cause you to briefly sleep. It will later be explained away as a mysterious phenomenon. Do you have any questions?” In fact, it is true that virtually anyone leaving North Pole City views their stay as a dream. Some say it helps them cope with the harsh reality of the outside world after being in such a perfect paradise.

The Captain stuttered a bit at first but finally said,” I firmly believe we have been poisoned with some manner of drug by a spy on board. If us leaving will end this hallucination then we surely will. Wow, I think this is English I’m speaking despite never learning the language. God help us, men, we need to leave now!” They all ran back on board while Santa waved his hand using one of his Angelic powers that caused the camera footage to become scrambled. The sub soon sunk beneath the ice again. Jack Frost commented,”Santa I was about to freeze the whole lot of them! Lucky you came along when you did!” Santa replied,”Oh Jack you’re always so quick to take physical action before thinking a problem through!” Jack countered,”Sometimes that is the best way to handle things!” He walked away with Frosty following him. He could be heard asking, “Hey Jack lets have a snowball fight!” Jack muttered, “Uh okay but lets wait until nobody is watching.”

As the sub sunk into the Arctic sea Santa placed a delayed spell upon them so they would sink into a sweet slumber for a short period of time while the sub was on auto-pilot. An Elf sneaked on board to make sure it was set. Elf spies verified the secret Russian record as saying the crew suffered a mass hallucination of unknown origin. After the incident, the ground was repaired and greater countermeasures were put in place to prevent subs from crashing up through the surface of North Pole City ever again!

🎅As the Founder and President of Mystic Investigations I have dealt with all manner of metaphysical mayhem! However the supernatural beings and paranormal phenomenon of the Christmas season are some of the most magical. Our supernatural crime fighting team has had the honor of being welcome at the Demi-Angel Santa Claus's North Pole City and the horror of battling the diabolical Anti-Claus! This Xmas blog was born out of a deep interest and love for The Spirit Of Christmas! Merry Christmas To All And To All A Safe Night!🎄
View all posts by Xavier Remington →
This entry was posted in Arctic, North Pole, Santa Claus and tagged North Pole City, Submarines. Bookmark the permalink.
Copy Protected by Chetan's WP-Copyprotect.