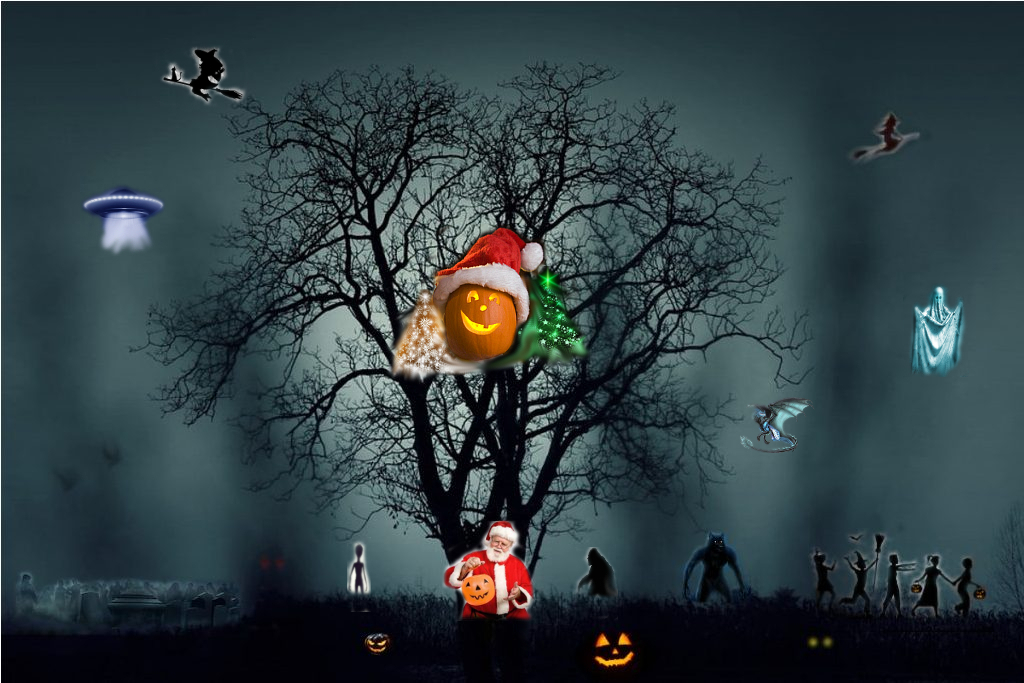 As the chilling month of October approaches Santa Claus calls upon The Autumnal Goddess. She directs her Autumn Nymphs, and Fall Fairies to transform North Pole City into a Halloween haven of Autumn allure. Autumn Elves of various woodlands and forests join their Christmas brothers to aid in this exercise as well. The deciduous foliage is enchanted to explode into a kaleidoscope of fantastical colors! A palette that included hues, and tones never before seen in the non-supernatural world. This also encompasses glowing, and glittering leaves as well.  All of which eventually fall to the ground majestically in a variety of mesmerizing patterns.

Incidentally, the leaves remain perfect even on the ground and don’t turn into brown crumbly paper. They eventually turn to mystical shimmering dust that compliments the later snows of winter. Once the leaves flutter downward, the trees begin growing unique winter leaves of dark blue, sky blue, and white colors under the direction of Winter Deities such as Jack Frost. There’s also the spectacular giant poinsettia trees that bloom bright crimson in December! Ultimately though most of the landscape is dominated by the perpetual pines of emerald elegance along with other evergreens. 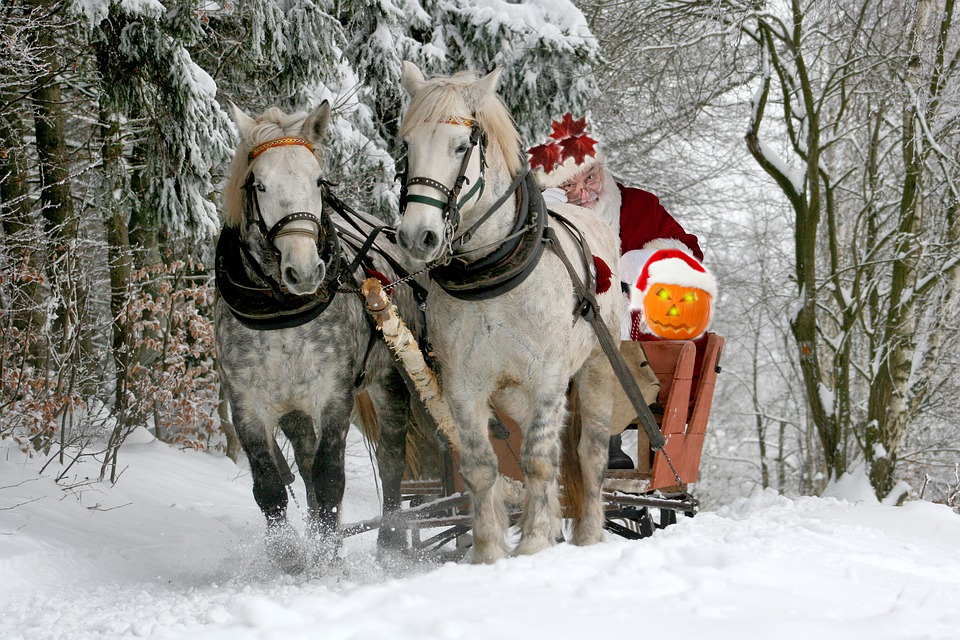 The Enchanted Elves who volunteered for Halloween duty take a break from Christmas preparations to decorate the entire city in the Spirit Of Halloween. Lights of orange and black along with a horde of Jack-O-Lanterns lit with eternal candles displaying every color in the rainbow are strewn about. However, most pumpkins emit a familiar amber or orange light. A handful of Elves, known as the Halloween Tricks Troop, scurry about in various spooky costumes spreading frightful fun with spirited glee! This is especially easy considering the sun has already permanently set until Spring. Thankfully the bright Star Of Bethlehem always shines in the holy skies above Santa’s sainted city.

It’s only in the last decade that Santa finally met Shala, The Queen Of Halloween, along with being invited to her hidden haven of Halloween

Island. A mystical island slightly out sync with our reality. It becomes a temporary physical island for 24 hours on Halloween to regenerate its powers. 2016 was the first year that a supernatural bridge was built between North Pole City, and Halloween Island to loan Shala additional metaphysical energies so she can have more protections from both Angels, and Demons. Both are after her since she’s considered a blasphemous Angel-Demon Hybrid by most of their kind. Christmas 2016 was also the first time Halloween Island built a portal to North Pole City to return the paranormal power favor. The Angels of Heaven give Santa a free pass for this and other paranormal relationships they don’t agree with due to his special Sainthood status. There’s also the fact that Jesus Christ has declared his support for him.

The Bewitching Bridge Between Supernatural Worlds 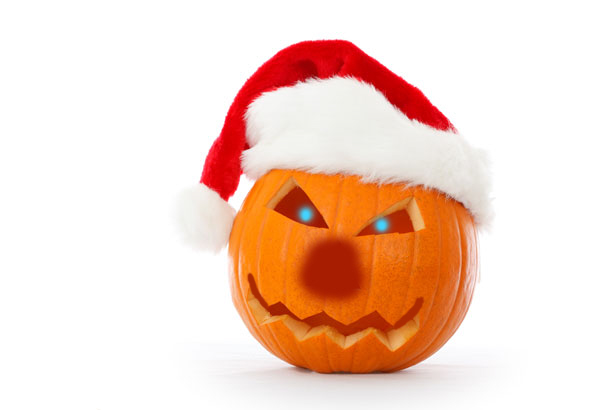 The bridge between the two worlds offers North Pole inhabitants and guests first-time access to Halloween Island! Visiting kids of supernatural families, regular kids from around the world in astral form as they dream, and the spirits of deceased kids join the frightful fun! There’s also the globe-trotting free-spirited Children Of Goddess Gaia Mother Earth. All wear costumes, and skip from door to door to acquire the sweetest candy on Earth if not the entire Universe! Trick Or Treaters canvas both North Pole City and Halloween Island. Even though it’s just as safe as the North Pole, things are far scarier and darker in Queen Shala’s realm. Parents are warned before allowing kids to cross the bridge. Most don’t have issues as many have paranormal powers and previous exposure to the sinister supernatural world.

Queen Shala’s Halloween haven has many haunted houses including her own spooky castle. Meanwhile, within the winter wonderland there is one haunted house set up by Elves. Santa Claus also decks out his own home as a haunted manor. Both holiday leaders have their respective Halloween parties at their homes. There’s also a joint celebration on the wide bridge between worlds hosted by both Santa and Shala. Time moves far slower on Halloween Island so there’s plenty of time to do everything on Halloween night. 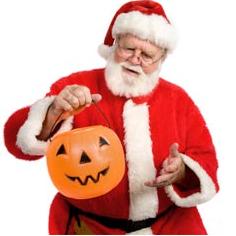 All Hallows Eve is one of the few times a year Santa wears a costume other than his own Santa suit. Actually, he uses his Demi-Angel magic to totally transform his appearance via Glamour. Last year he went as a Leprechaun riding Rudolph The Red-Nosed Reindeer who was transformed into a Unicorn. He and Mrs. Claus took their extremely slow

growing kids, Nick, Jr. and Mary, trick-or-treating to Elves houses, and shops along with the homes of Afterlife spirits on Halloween Island.  The Halloween atmosphere of North Pole City is gradually restored to its complete Christmas glory beginning at The Christmas Commencement Ceremony on November 3rd. The official start of the Christmas Season that overlaps with the Halloween Season until Thanksgiving. However, by November 7th all Halloween decor is gone. Only then do the last of the autumn leaves fall as the first buds of winter foliage fly forth toward the North Star.

By Xavier Remington | Copyright © 2016 All Rights Reserved MysticInvestigations.Com If you’re seeing this entire article on any other site besides Mystic Investigations then contact us immediately!