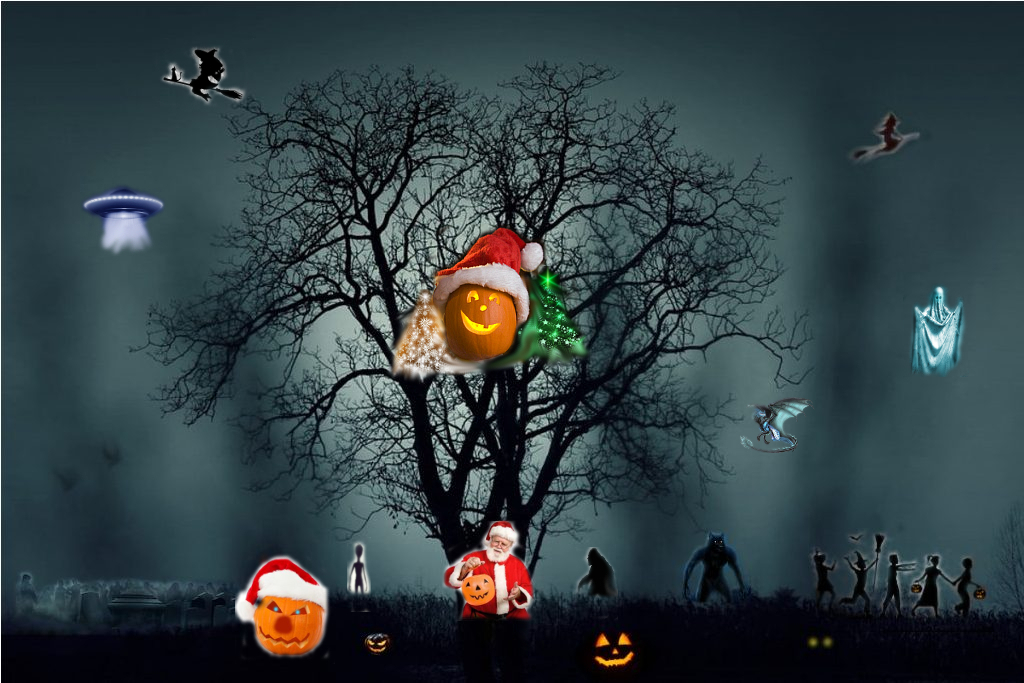 We’ve had the pleasure of speaking with Santa Claus about his Halloween exploits, and his plans for the Christmas holiday.  Santa Claus, his family, and enchanted elves do indeed celebrate Halloween.  Santa acknowledges the magical forces of good marshaling the innocent magic of children trick o treating. This is done in order to counter the forces of evil that use the Spirit Of Halloween for nefarious purposes.  Christmas, on the other hand, is the center of goodness for the year. It is the ultimate marshaling of good magic stemming from the worldwide gift giving to strengthen the Spirit Of Christmas which is, in essence, the soul of Demi-Angel Santa Claus himself.  The Spirit Of Halloween belongs to the soul of the mysterious half-angel half-demon leader of Halloween named Shala.  The very figure who presided as judge centuries ago when Santa was charged with violating the Supernatural Secrecy Pact.

As usual, Santa decorated his Stately manor and all of his North Pole City for Halloween after the Autumn Equinox.  It’s usually a White Halloween at the North Pole as there’s always snow lining the ground and foliage. The Evergreens are strung with orange pumpkin lights and other decorations along with lit Jack-O-Lanterns strewn about.  Santa tends to stick with the non-evil decor of a non-gruesome nature so you won’t see anything paying homage to graveyards, death, zombies, vampires, werewolves, or anything of a bloody sort.  It’s mainly G-rated fun.

There is a haunted house but it’s meant only to lightly scare kids who are lucky enough to be invited to the North Pole for Halloween.  Trick O Treating in North Pole City is said to be quite a treat indeed.  Happy children merrily frolic about the shops, and elves homes to receive candy and small gifts.  The evening culminates at the Claus Manor Halloween Costume Ball.  A party for adults, and kids involved in the world of the supernatural.  This is their reward for a job well done fighting the forces of evil.  Of course, the ultimate honor is to be invited for Christmas as Santa’s house.  An honor we at Mystic Investigations was granted on Christmas 2011.

The Battle Against Evil!

On Halloween morning during the Witching Hour to the brink of dawn, we in the paranormal community see the most heinous horrors. The night of trick o treating is less infested with evil.  Santa by no means sat at home eating candy corn during the early morning time of tumultuous terror before sunrise.  Although he does love to eat candy corn which is his sixth most favorite candy. Santa is out there in the field with us battling the dark forces who would enslave humankind! Often he deals with his evil brother, The Anti-Claus, and his nefarious Halloween plots. Usually an attempt to take over Halloween, and transform it into a 100% vessel of evil on this Earth.

The Imprisonment Of The Dark Claus

Santa magically jailed the Dark Claus during the 2011 Christmas season after one of his preposterous plots went too far.  This wasn’t easy since he and his Demi-Demon twin brother are just about evenly matched in strength and magical powers.  In fact, he needed a magical assist from the team here at Mystic Investigations.  His rotten sibling existed in an inter-dimensional prison until 2013 when he finally escaped.