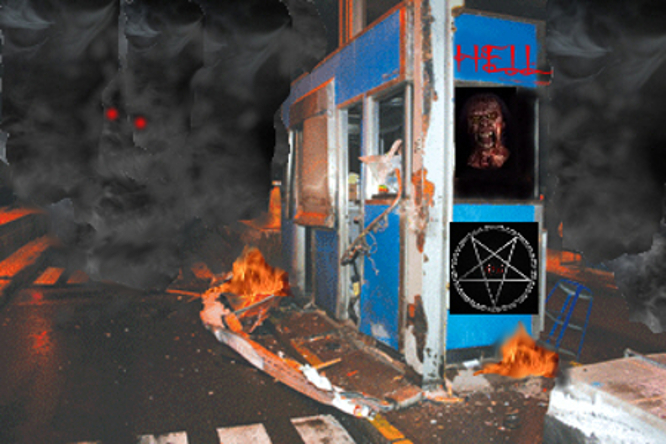 The lone phantom tollbooth from hell randomly appears for some tourists in the horrifying heart of the Witching Hour. This disturbing event occurs on various isolated US roadways that used to be a part of Route 66 or connected with it. They say if you pay the toll and pass through you will literally drive yourself straight to hell! Apparently, back in 1984, a guy named Ralph Hanks was a toll booth worker who was suspected of being a serial killer. There was no proof but everyone knew it was true. One day a vigilante rammed his semi-truck right through the booth smashing it to smithereens thereby killing Ralph. A year later the ghostly tollbooth started to appear in the middle of nowhere manned by the hellishly hideous specter of the vengeful haunting Hanks.😈

It’s a blue run-down-looking tollbooth with a fog of mist swirling around it along with a few unholy hell flames. It also has no official signs on it indicating it belongs to a given US State. Nor is the toll fare posted even if it is your very immortal soul!  Although the word “HELL” is written in blood along with a pentagram that has a “666” in the middle. Ralph will first appear as he did when he was alive except for his ghastly pale white color. Hanks will give you a cold stare while holding his hand out for the toll fare.  He will not speak unless you hand him money and then he will howl “Drive straight on through to hell!” as he laughs maniacally. His face will then turn to the ghoulishly monstrous form as witnessed in the image above. If for whatever reason you get to this point we strongly advise you to put your car in reverse and floor it the hell out of there!

Some alleged witnesses have claimed to see cars driving into a wall of flames and then the tollbooth disappears into the macabre mist. Others allege that the 666 on the pentagram signified a hidden highway that exists on another plane of reality. A so-called Route 666 if you will. You may very well have driven or walked through it without knowing since it would most likely be out of phase with our reality at the quantum level. If you spot a single blue tollbooth in the middle of nowhere surrounded by a dark fog then we advise turning your vehicle around and finding another route.  Please contact Mystic Investigations or another paranormal crime-fighting firm immediately so we can attempt to eradicate both the booth and Ralph from our reality once and for all!

You’d be amazed how many people will not question what they believe to be authority figures. Despite all the warning signs Ralph sets forth a hypnotic reassurance that all is well.  God only knows the dark eternal multidimensional plight these lost drivers may be engulfed in at this moment! It’s theorized these people remain immortally alive while literally driving eternally around Route 666 in Hell! Due to the nature of containing them, the Devil can claim their souls to add to his metaphysical power yet he can’t torture or harm them in any way. Pray for these brave bastards to escape someday!

Ralph is considered a high-level dark ghost or spirit with a demonic assist! He’s possibly a poltergeist as well. In all likelihood, his original tollbooth was unknowingly on the Route 666 to Hell. The creation of such a powerful vengeful spirit no doubt occurred when this wayward human literally died on the road to hell. Ralph seems all too happy to continue his reign of terror by willingly turning over his soul to the Devil! Plausibly he is earning his way to demonhood by trapping lost souls in Hell via his terrifying Tollbooth. If you are stuck at his stop you may be able to escape by employing holy relics to repel him. These include holy water, religious texts, and various blessed symbols.🔥

Next Urban Legend:  The Legend Of The Mystical State Serial Killers