A Mystic Investigations Story: The Man With No Legs Who Could Walk! 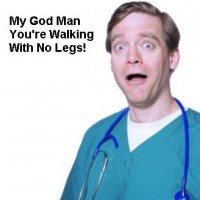 Friday morning we got a call from Zack Powers, our bionic boy wonder, about something his Grandma, a nurse, had witnessed down at Woodland Springs General Hospital. Not long after that our friend Sheriff Blake Maverick called on the same subject. It seems the victim of a construction site accident had been in a coma for quite some time, and had awoken. Before he could be informed that both his legs had been amputated he proceeded to get out of bed, and walk about the room angrily asking where the hell his clothes were.  His wife, three kids, the Doctor, and Zack’s Grandmother Debbie Powers looked on in utter shock as he appeared to levitate around the room with the exact movement of walking.  The Doctor finally yelled,”My God man just look at your legs! Just look at them!”  He looked down, and had a dumbfounded look on his face before fainting. Read The Rest Of The Story…

This man in fact had what is known as an Active Astral Body aka Metaphysical Energy Body.  Such a phenomenon is classified as a Psychokinetic Power since it is usually activated in the DNA.  More or less a persons lowest level soul is amplified by the Chakra so it exerts a force in our physical reality.  It will generally mirror the physical body so when a biological part goes missing the astral part is in it’s place. However it’s usually invisible, and photonic light energy must be applied to give it appearance.

December 1, 2022
Is The Thanksgiving Guild The Greatest Secret Supernatural Society On Earth?

November 24, 2022
Do Those Born On Halloween Have Paranormal Powers?