The video below is a frightening Halloween prank that seriously scares horror movie goers. They are spooked by a man posing as a machete wielding killer! What if that man was indeed a real serial killer out for flesh and blood?  A set up similar to the video proved to have deadly consequences when a lone nefarious figure set his sights on those out for a leisurely Friday night on the town. Our paranormal investigations uncovered the existence of a top secret underground government facility in Iowa under the guise of a working farm on the surface. A variety of genetic experiments were taking place in which humans were injected with supernatural DNA to enhance strength, speed, agility and senses.  However, it generally drove both the willing & unwilling subjects quite nuts!

On Halloween Night sometime in the early 1990’s one sadistic subject gone mad escaped to partake of a diabolical serial killing spree! This is The Horror Movie Hackers hellish story!  Some details like the location and exact date of the incident have been so thoroughly wiped from top secret records that not even our insider government sources could provide it. Also gleaming more clues than the general urban legend could alert the government to a mole in its midst. In the end the public has a right to know the various terrors that paint a sanguine path across the American landscape!  Read The Rest Of The Legend On Our Halloween Blog… 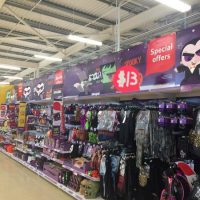 It was the Witching Hour of Halloween when a serial killer wielding an extra large meat cleaver eradicated two 3rd shift employees stocking shelves in Aisle 13 at a large department store. Interestingly enough Aisle 13 was for seasonal items. In this case it was being stocked with Halloween Costumes, and Decor. The sick individual grabbed a random monster mask, and placed it over his face while laughing like a loon. He then proceeded to slice and dice the man and woman up while arranging the body parts around a Satanic symbol he painted in the victim’s blood.

At the Devil’s Hour the police arrived to find him drenched in blood while chanting incantations in an unknown ancient language. He ignored them at first but once they neared him he ripped his mask off to reveal his deranged scowl of evil! He then leaped forth screaming,”Don’t interfere with my masters ritual!” He brandished his meat cleaver, and the cops were forced to shoot him in self-defense. He collapsed, and died amid the bloody carnage of his innocent slayed victims. Read The Rest Of This Urban Legend On Our Halloween Blog… There have been rumors swirling about supernatural circles that the Devil claims a soul lost amid Daylight Savings Time. This occurs in various nations around the world but for reasons unknown, the United States is the Devil’s favorite target. Every year in the USA on the second Sunday in March Americans are required to set their clocks an hour ahead at 2 AM. This sets time squarely in the 3 AM Devils Hour. Legend has it that lost hour becomes metaphysical temporal energy the Devil and some other entities are said to collect.  As the enchanted energies are collected it creates a supernatural net that captures a soul at the wrong place in the wrong time! Their body and soul go to Hell until the end of Daylight Savings Time on the first Sunday in November. Unfortunately, it is said they return as a lost soulless creature while their spirit remains in Hell until they die as they were naturally intended. Of course, by then their tortured soul is deeply damaged!

A Human Soul Is Lost To The Missing Daylight Saving Hour!

Our extensive research into this insane urban legend has led us to believe it is indeed true! Each year one person goes missing on March Daylight Savings Sunday and reappears at the end of November. Family and friends say the victim can’t remember where they’ve been. They are beyond apathetic and seemingly emotionless. Once warm and loving individuals return as cold zombies just going through the motions. However, they often awake with screaming night terrors as their sub-conscious relives the horrifying hell they suffered. Apparently, the Devil treats them as an honored guest of Hell one moment and then lets his demons have their way with them the next! It’s thought that the innocent soul is eventually traded for a Demon captured by Heaven. Although as mentioned the soul exchange doesn’t happen until the person’s body has died on Earth. The metaphysical mechanisms that facilitate this temporal soul capturing net are tied into the human collective consciousness that dictates what numerical time it actually is. The lost 2 AM hour lives on as an elusive entity in the minds of humankind as we jump to 3 AM. During this instantaneous time jump, an unconscious metaphysical energized spirit for the non-existent 2 AM hour is created. For an instant, it is spread across any given time zone like an invisible net. The 3 AM Devil’s Hour hits and it is spiritually anchored to a random Underworld portal in the region. The Underworld is the physical connection to metaphysical Hell. At 3 AM the two o’clock hour astral net is pulled into the paranormal portal. The soul nearest to the portal gets caught in the increasingly concentrated net and is dragged into the Underworld all the way to Hell! It never captures more than one soul because the power of the Human soul is off the supernatural scales. It’s simply too much for the net to maintain more than one. The body itself is transmuted into a temporary metaphysical form as well.

The Lucky Daylight Savings Break For A Vampire

Oddly enough the net would be more likely to attract a demonic soul to it. However such beings on Earth are rare compared to humans. There is an anecdote of a vampire being dragged to Hell one year. Apparently, he had the time of his life and came back to brag how he was in tight with the Devil. In fact, he left as a fourth generation vampire and was powered up like a first generation vamp upon his return. He’s now a high-level minion for the royal Transylvanian vampires! It’s good to know that there is sometimes a silver lining to this temporal atrocity!😈