The news reports of ill, abused, and homeless Denver Area kids getting a Fantasy Flight to the North Pole appeared to be a fun staged event.  The awesome adventure of meeting Santa Claus in the Capital Of Christmas. There were indications of a mere hour flight to a special North Pole decorated airport hangar where Santa Claus was supposedly waiting. This took place before Mystic Investigations arrived at the actual North Pole City for our annual vacation retreat.  However Santa Claus himself confirmed those kids arrived here for real!  You won’t see anything detailing this in the news reports courtesy of the Supernatural Secrecy Pact.

The Spirit Of Christmas Delivers The Dream Of A Lifetime! 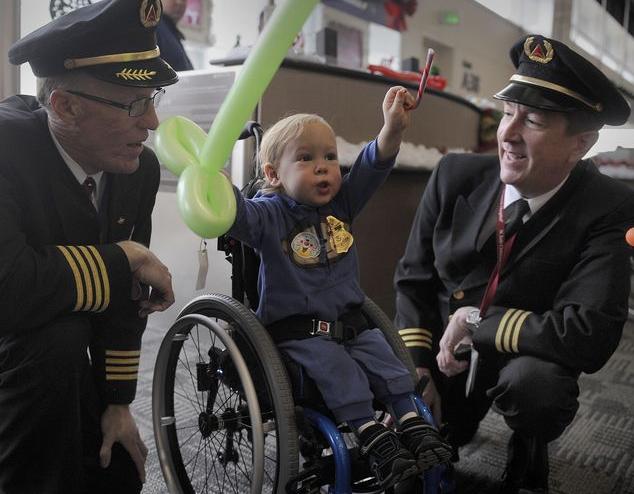 It seems there were enough kids on board to make this miraculous journey happen. Children with the magic of innocence who 100% believed with all their hearts they were going to see Old Saint Nick in his native winter wonderland. The Pilots were nearing the end of their one hour flight to the Christmas decorated airport hanger where the fake yet gracious Santa awaited the kids. Just before the Pilot was about to radio the tower for his landing approach the plane disappeared from radar for a few seconds. It was explained as a glitch. In reality the aircraft entered a paranormal porthole created by the Spirit Of Christmas which was compelled by the sheer pure belief of the Children. The Pilots were scared as they saw the lit skies suddenly turn black for they were at the real North Pole currently under 24-7 polar darkness. Thankfully the windows in the passenger compartment had been closed to preserve the intended illusion of flying to the North Pole for the kids.  Otherwise they might have been deeply frightened by the sudden disappearance of daylight.

The Pilots were panicking until they saw a bright star ahead guiding them. It was the Christmas Star of Bethlehem. The holy light calmed them down, and reassured them that all would be well as the Spirit Of Christmas washed over them. Then they became dumbfounded as they saw a mystical city bright with lights before them below. A supernatural city that looked unlike anything they ever witnessed before. Something that could only exist in their wildest dreams. It was the fabled North Pole City! The Air Traffic Control Elves in the flight tower at Saint Nicholas International Airport contacted Santa immediately because it was an unexpected flight that came out of an unknown paranormal porthole. The call had to be made as to whether the flight would be magically returned to it’s origin point, or allowed to land. Santa Claus immediately knew what had happened thanks to his Demi-Angel psychic powers. He authorized the flight tower to guide the plane in.  Santa exclaimed,”Those sweet kids earned the right to enter this sainted polar paradise! Supernatural Secrecy Pact be damned!  Oh my excuse my profanity Li’l Elves!”

The Pilots didn’t respond at first when an Elf radioed them in his high pitched comical voice saying,”This is Saint Nicholas International Airport authorizing your landing on Runway Rudolph” Eventually they responded, and accepted landing instructions in disbelief. Outside their windows a reindeer flew in front of them with a red glowing nose, and an almost human like smile on his friendly furry animal face. He guided them on to the runway as both Pilots had their mouths wide open in shock at their sudden entry into the world of the paranormal. The door of the plane opened, and they were greeted by the real Santa, and Mrs.Claus along with some cute little diminutive Elves.  Some of which were shorter than the children. The adults were so supernaturally shocked that they remained mostly silent while the kids squealed in jubilation. Laughter erupted forth as the children were led through the festive airport onto the holy grounds of North Pole City.

The moment they touched the blessed ground, and bathed in the holy light of the Christmas Star, the terminally ill, and deformed children froze for several moments as they were rapidly healed of all ailments. The homeless, and disadvantaged forgot about their misery only to think of nothing but fantastic fun. Even some of the adults with minor ailments, from a mild cold to some minor back aches, saw it all disappear! Everyone felt like they were floating on air full of life, love, and health. Tears of joy were shed by many over the miracle as Santa & Mrs.Claus gave them a group hug. At North Pole City everyone with some level of goodness in their heart is perfected…although be it temporarily until they leave. This is unfortunately due to the Supernatural Secrecy Pact. If Santa Claus had his way he’d take over the entire planet, make it a paradise, and heal every man, woman, child, and animal. As a Demi-Angel he has the God like power to do so!

For an entire 24 hours the lucky group lived in a paradise of magical peace that few get to realize. Children once confined to wheel chairs frolicked with Frosty The Snowman, Elves, and talking sapient Reindeer. They were led in care free play by Santa’s perpetually young son Nick, Jr, and daughter Mary.  Their immortal dog Sparky the Dalmatian barked, and wagged his tail with glee while following the happy group. The day came to a close, and Santa knew it was time for them to return home since the more time that passed the more power that would be required to send an entire plane back in time through a temporal porthole. Also he didn’t need The Powers That Be crying foul for such a huge violation of the Supernatural Secrecy Pact. He sadly bid the group farewell without telling them they would return to their original state of physical health. Thankfully though they would all be far better off mentally, and emotionally. As each individual entered the airplane he mesmerized them in a way far greater than that of the infamous vampire hypnotic compelling. They had to forget everything on a conscious level but would still have the experience sub-consciously.  So when they entered the Afterlife someday they would have full recall of their enchanted experiences at the North Pole.

The flight took off with the Pilots in a trance like state until they entered the temporal porthole. Once back in time at their origin point everyone’s physical ailments returned instantly. Although they were too joyous to truly feel it yet. The flight tower of their destination airport radioed them to land, and they saw the well meaning imposter Santa at the holiday decorated hanger. The kids were still experiencing the real North Pole elation while at the fake North Pole which is apparent in the video above. Now that they have been to the real North Pole they all have a special connection that will allow them to more easily return within their dreams in an astral projecting solid light form. Dreams that will further fuel happiness to get them through the tough times in their lives. Lives we will all experience for ourselves, and learn from in the various parallel Universes of our Multiverse.  All humans with righteous souls entering the Afterlife will have equal experiences.  Merry Christmas From Mystic Investigations!

Donate To Children In Need