Is Frosty The Snowman Real? 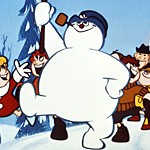 Yes, indeed the most legendary Snowman of all time is real! Now, of course, Frosty The Snowman is of no relation to the ferocious Abominable Snowmen, aka Yeti, that instills terror into the hearts of children, and adults alike.  Frosty, on the other hand, is a delight to all who cross his paranormal path!  The famous Frosty lives in Claus Forest which is on the western side of Santa Claus’s North Pole City. This is somewhere in between where Santa Claus lives and the Ice Crystal Woods where Jack Frost has a castle. Frosty’s portrayal in the classic cartoon bearing his name is somewhat fictional but is in fact based on the true story of an enchanted anthropomorphic snowman who miraculously gained locomotion, and sapience on Earth!  You can watch the classic Frosty The Snowman cartoon online here.

The Birth Of An Enchanted Snowman

Frosty The Snowman came into existence one fateful night on Christmas Eve 1948 as Santa Claus began his journey delivering gifts around the world. Some gifted children were about to make history by inadvertently bringing a mystical being into existence.  At North Pole City these psychokinetic children and their parents had been welcomed as guests by Santa Claus.  Early on Christmas Eve by the light of mystical candles, a crescent moon, the extra bright holy Christmas Star, and a sky full of shimmering stars, the kids built a snowman on the sacred grounds of Santa Claus’s Manor. The snow itself was mixed with magical sparkling Elf Dust which is similar to Fairy Dust. Elf Dust is a by-product of Elves exhaling. It’s invisible when breathed out but over time it accumulates in the environment.

The happy children innocent built the serene-looking snowman with eyes made of coal taken from a nearby shed. Plausibly the coal Santa drops into naughty kids stockings? The Snowman’s nose was a large red gumdrop one of the children had purchased from Sandy The Human Elf at his Sugar Shack. His mouth was made with a piece of red and black licorice that another child had with them. The red licorice would end up forming Frosty’s tongue. No corncob pipe was placed in his mouth.  Also, he was not given a top hat but rather one of Santa’s spare red hats with white trim, and the white tassel on top.  His arms were made of the branches of an enchanted evergreen. Once he was done they named him Frosty.  A series of amazing coincidences animated this snowman and actually gave him a sentient mind, and soul as well.

paranormal that remains hidden from most people.  One of these children was a hereditary witch who was born with the active power of Quintekinesis which is life force manipulation. This interacted with another child’s Cryokinetic power of ice, and snow manipulation. They knew not of their power at the time, and inadvertently animated the snowman.  Upon completion of their snowy masterpiece, they all hugged the Snowman together and declared they loved him with the Spirit Of Christmas in their hearts. This transferring their combined power of innocent magic, and infinite imagination that dwells within all kids.

Another factor in creating this unique supernatural being was the fact that the Goddess Gaia, aka the very soul of the Earth itself, was naturally drawn to the child who possessed the life force manipulation powers.  Her life force was focused upon the ground in that area.  So Frosty was built with holy supernatural snows laden with Elf Dust in the Spirit Of Christmas upon a North Pole paranormal hot spot empowered by the very life force of the planet itself. Possibly the Winter God Jack Frost and other Winter deities residing nearby could have played a role as well. All these factors combined created the first known walking, talking, thinking, and emotional snowman to ever exist on Earth!  In addition, since he is made of holy North Pole City snow he repels all manner of diabolical denizens of darkness!

When the force of life swept through the Snowman the Elf Dust within his sainted snows sparkled brightly with a plethora of rainbow colors as his eyes of coal turned somewhat human-like except much rounder.  His black licorice mouth opened up in a wide smile to reveal flat teeth of ice along with the red licorice molding into a tongue.  His gumdrop nose smoothed out and became like the surface of a perfect jelly bean.  Snow crawled away from his body to cover his evergreen arms creating human-like arms and hands.  His face and entire body became somewhat human-like as he grew snow legs.  He ended up looking somewhat like he does in the cartoon we all know, and love.  A cartoon clearly based in reality as the chubby lovable snowman walks among us.  Upon full animation, his first words were “Merry Christmas” rather than “Happy Birthday” since he was born on Christmas Day.  The enchantment of the holiday itself probably played a role in his animation as well.

The kids were shocked, and an Elf nearby ran for help as he’d never seen anything like that happen before.  Soon more kids, other North Pole City

guests, all the elves, enchanted reindeer, Mrs.Claus, and her children gathered around this marvelous mystical miracle! Frosty was fully self-aware and knew how to speak complete English as well as every other language on Earth.  That could be due to one of the special kids having the power of Omnilingualism, or the natural ability to understand any language in the Universe. He also had the personality of an innocent jovial child yet was quite intelligent. When Santa Claus arrived home on Christmas morning he considered Frosty one of the most amazing gifts he’d ever received.  Frosty The Snowman soon became a fan favorite fixture of North Pole City and a good friend to everyone residing there.  Even the notoriously cold Jack Frost! Frosty acts as the Ambassador for the City greeting visitors and traveling at times to other paranormal locations around the world on behalf of Santa Claus. He is also often in charge of organizing events for kids visiting the North Pole. He also teaches some classes at the school located there for permanent and long-term residents.

We at Mystic Investigations have had the pleasure of first meeting Frosty when we attended a Christmas Dinner at North Pole City in Christmas 2011.  He’s oddly warm to the touch as his white snow body sparkles in sheer iridescence.  He is childlike in nature which would lead you to believe he might have a low IQ but as we said he’s very smart and is like a walking encyclopedia as he sucks up knowledge like a sponge.  He teaches kids a lot while making everything seem fun.  It’s hard to not feel like a kid again when you spend even one minute with Frosty.  Contrary to popular belief removing his hat doesn’t turn him back into a regular snowman as that is not what created him. In fact, he alternates between the Santa hat he was born with and a top as seen in the cartoons. It was actually a gift from a visiting magician who wanted to emulate the cartoon.

Despite the fact, he can’t be deactivated like a robot he does have the power to play dead and appear like a real snowman at will. A stealthy maneuver at comes in handy when he travels around the world on Christmas missions. The sneaky fellow also loves using that skill to play pranks on people.  You’ll think it’s a regular snowman, and all the sudden he reanimates while screaming at you with glee. Believe me it scares the ever-loving heck out of you! And of course, it’s no surprise that he is the master of any snowball fight giving an entire brigade of Elves a run for their money! The balls either bounce off or meld into his body. Sometimes he just opens his mouth wide and eats them! 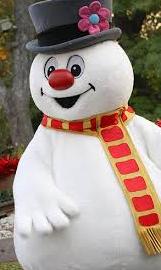 Frosty The Snowman must remain cold or he will melt.  Although the enchanted snow he’s made of resists far more heat than normal snow. If he must travel he tries to stay in cold areas. Otherwise, he has a special refrigeration unit he stays in. He can actually withstand 80 degrees Fahrenheit in the hot sun for up to 30 minutes before he really starts to deteriorate!  There have been instances where he fully melted but his spirit remains among the melted magical North Pole Christmas snow.  When the holy water is collected, and exposed to cold he reanimates as if nothing ever happened.  Generally, he spends most of his time at North Pole City in his beloved Claus Forest.  He loves the outdoors and has never had any interest in building a house for himself. Especially considering the fact that he requires no shelter, sleep, or food. You’d think it would be creepy to meet an anthropomorphic snowman but he’s downright adorable! The gentle snowman radiates a loving warmth, and sense of humor most human adults could never muster up even on their best days. God bless Frosty The Snowman, and Merry Christmas to all, and to all a good night!⛄️

This entry was posted in Frosty The Snowman, Santa Claus. Bookmark the permalink.