The Powers That Be have betrayed themselves by removing the video this article is based on. Thankfully we have a partial gif capture placed above instead. You can still see the whole video on the Internet Archive here…

The video above captures a homeless man awakened by a hooded individual walking through the solid glass door, and window of a convenience store. We authenticated this video, and it appears the hooded man has some manner of dimensional phase-shifting powers. This ability allows a person to slightly alter the frequency vibrations of the energy strings within their body well beyond the sub-atomic level.  This power works through the Chakra’s that connect biological energy with the metaphysical. Somewhere in between lies physical non-biological energy strings that are the foundation of all matter in this reality. If their vibrating frequency is altered just slightly one can pass through all solid matter.

With practice, the quantum level alterations can be enough to phase into a Parallel Universe.  Clearly, the man in the video uses his power rather casually as his method of survival.  In this case, he grabbed one item to eat. He’s probably careful not to steal anything too large so the US Paranormal Defense Agency, or private paranormal organizations, don’t come after him. Of course, he might want to check for cameras when using his amazing ability. In addition, you’ll notice the flickering lights, and video which would be the norm as he would be giving off a lot of electromagnetic energy while using his special supernatural abilities.

If you spot this man report him to the nearest paranormal investigations organization or skilled practitioner of magic. He doesn’t appear dangerous but if faced with capture he could plausibly use his power to alter other people’s vibrational energy. His body is adapted for that but the average person could suffer catastrophic health issues including seizures, and heart attacks! One could also possibly find themselves permanently out of phase with our reality. In essence becoming a living ghost unable to survive since they can’t touch matter including food, and water. Another issue would be perpetually sinking into the Earth until you just ended up floating in the center forever! In rare cases, an attack could send someone into a parallel Universe or even an alternate dimension of potential hell! 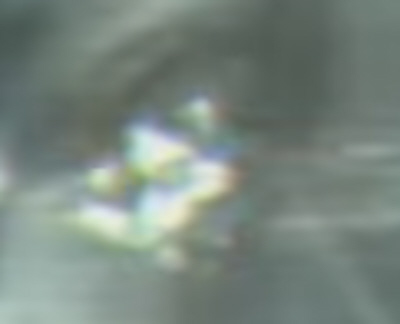 The logo appears to be from a relatively new paranormal group known as the Transatlantic Triads. Basically, a criminal gang of young people with supernatural powers actively recruiting on the US East Coast, Western Europe, and everywhere in between.  So far their thefts are petty but they’re looking to raise funds, and make a big name for themselves in the paranormal community. The only positive thing we can say is they serve themselves, and not demons, or other higher dimensional entities of evil!⚡️