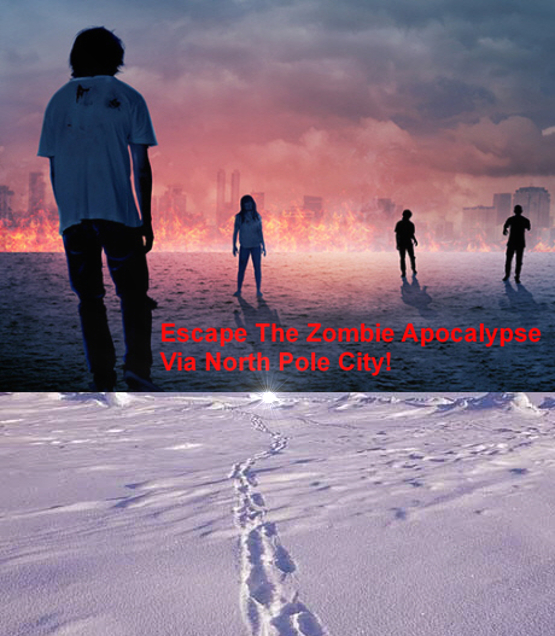 You’re darn tootin you’ll be super safe! If the Earth were ever to fall prey to a global Zombie, Vampire, or even a Werewolf Pandemic then the safest place is North Pole City. If nothing else when it comes to zombies it’s so far north that they’d never get close since the walking dead literally freeze in below-freezing conditions. Santa’s Winter Wonderland has cloaked, and protected supernatural shielding making it ideal to hide out, and survive all global cataclysmic disasters.  Even a major meteor hit wiping out all life on Earth!  That being said, if most of humanity was destroyed out then the Spirit Of Christmas would shrink to a mere shadow of itself! This occurs since it relies heavily on the human collective consciousness of billions. However, it is Santa Claus’s Demi-Angel powers, along with his Christmas Crystal, that are the core force of the Christmas Spirit. His saintly angelic lifeforce is the foundational fuel that drives the most magical place on Earth.  North Pole City could most likely support at least a million people supplying them with plenty of food, clothing, and shelter.

This is great news for those of us in the Paranormal Community who know that North Pole City is real, and how to get there. What of the rest of the

survivors? Those who believe in Santa Claus, and the physical existence of North Pole City who are in dire need can get there as well. Begin making your way north following the North Star as you continually pray to Saint Nicholas. He will most likely send transport to you. Especially if not many humans are left. It could be a sleigh or the fabled Polar Express train. Opening teleportation portals would drain too much-enchanted energy so that would be rare unless you’re in immediate danger. Incidentally, teleportation directly within the city is mystically blocked by Santa Claus for security reasons. Now of course we’re assuming that the Supernatural Secrecy Pact would at least become null, and void for those directly calling out for help to a specific metaphysical being.  Clearly, it is in full force now which is why praying to Old Saint Nick won’t net you a visit from him, or his Elves unless there’s something ultra-special about you. Naturally, a full-blown Zombie Apocalypse should throw the Pact right out the window!

There are also a variety of other supernatural strongholds including various magic schools, and the holiday Capitals of other paranormal entities including the Easter Bunny & Shala Queen Of Halloween.  Also theoretically the luckiest place on Earth would be the Leprechauns home base in Ireland.  Certainly if North Pole City reaches its population capacity Santa would arrange to send people to these other locations since he’s already considered the Leader of the forces of Good On Earth.

Can Santa, Or His Elves Be Turned Into Zombies?

Santa Claus, or any being with Angelic blood, cannot fall prey to the Zombie Virus.  This includes his children Nick, Jr., and Mary. Theoretically Mrs.Claus could become a zombie but there are too many other holy factors in play to allow that. Elves have never been susceptible to the Zombie Virus like their Gnome cousins.  Plus Santa’s Elves have been blessed holy, and pure.  The Reindeer nor Jack Frost could be made a part of the walking dead as well.  Even if a zombie managed to lurch about North Pole City it would probably be driven into the shadows by the holy light of the Christmas Star, or possibly burned to ash by it!

What Would The Rest Of My Life Be Like At North Pole City? 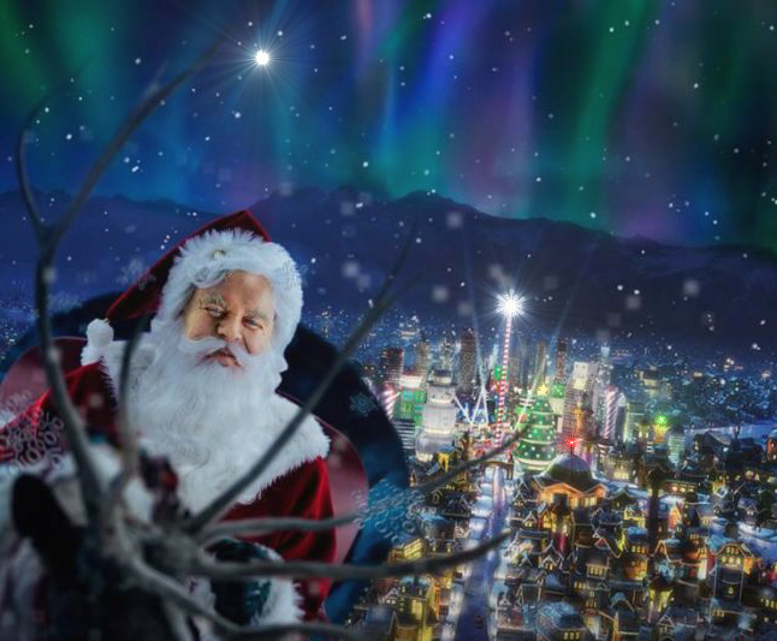 Most people are merely visitors at North Pole City. Santa, his family, Elves, Reindeer, and some other supernatural beings are virtually the only permanent residents.  The handful of humans who live there, including Mrs. Claus, would be our litmus test for the rest of us. Mrs. Claus is a special case because her original pregnancy with Santa’s son Nick Jr. imbued her with permanent immortality and a special connection with the powers related to direct access of the Christmas Spirit.  The other humans are not technically immortal.  However they age beyond slowly within the magical confines of the city washed in the pure holy light of the Christmas Star.  A conservative estimate would be aging of one year for every century of life!  10 years of aging per millennium!  In addition nobody gets sick nor injured at North Pole City.  Even if by some fluke something happened, Santa Claus has a full array of healing powers. In fact if one of your family or friends was a zombie, and you brought them with you then he could restore their humanity! It’s safe to say you would lead a long, healthy, and happy life!

Undoubtedly you could spend some of your time helping the Elves manufacture toys for those still left in the supernatural community along with potential expanded delivery to the rest of humanity if the Supernatural Secrecy Pact was totally terminated. Although for all intents, and purposes you would be on a permanent vacation in a paranormal paradise.  Your care free days would be like a return to your worry free childhood. Your new life would consist of playing with sapient Reindeer, Frosty The Snowman, and other supernatural beings.  Eating sumptuous meals with Santa would be the norm.  Consuming candy, and treats all day without getting sick or gaining weight is another perk.  There are a variety of unique amusement park like activities to partake of along with traditional winter sports such as skiing, sledding, wrestling polar bears, ice skating with penguins, etc.  Not to mention how dolls, toys, and other objects come to sentient life at will!  Santa even has the power to imbue realistic fantasies in your mind so you could vacation on simulated tropical islands or anywhere else you can imagine.  There would never be a dull moment as you had a fun filled life spanning several thousands of years!

We asked Santa Claus about what would happen if someone died a natural death in North Pole City. He indicated they would go directly to Heaven, and could come back in an Angelic form anytime they like.  Once you enter North Pole City as a permanent resident everything else is easy for eternity!🧟‍♀️