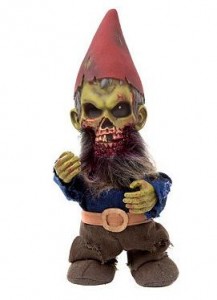 You may have been seeing more depictions of Zombie Gnomes on the Internet lately.  This is due to the fact that they actually only came into existence in recent years.  Generally, the zombie virus only affects humans but some years ago a new supernatural strain surfaced that infects isolated populations of the Gnome community.  Since Gnomes eat children it’s not really a tragedy to watch these little immortal bastards eventually rot into oblivion as walking dead corpses. It’s rumored that a misguided witch mutated the zombie virus and cursed it upon a group of Gnomes for devouring her child!  Unfortunately, as Lilliputian zombies, they now pose a threat to everyone! Especially children!  Thankfully the Zombie Gnome virus can’t be passed on to humans so most will only have a chunk of flesh bitten out of them unless they’re attacked by a hoard of the little Devils. They’ll finish you off like a group of hungry sharks!

You know you’re in trouble when this monstrous menace comes crawling out of the bowels of your garden!

Zombie Gnomes can’t be stopped in the same way normal human origin Zombies can be stopped.

That being brute force annihilation of their brains or bodies! These tiny suckers are resilient and regenerate rapidly! Complete incineration via hot flames is the only sure way to completely eradicate the Gnome Zombie menace! Unfortunately, there are no protections such as religious artifacts.  Nor do the few normal Zombie Repellents work on these horrifying Gnomes.  Zombie Gnomes don’t have a fear of adults, loud noises, or Garden Gnome Statues like standard Gnomes do. This paranormal phenomenon is simply too new. More research needs to be done on these hellish creatures!

If you’re looking for a safe way to instill fun loving Zombie Gnome terror in the hearts of Trick O Treaters then try the Sidestepping Dancing Zombie Gnome Doll Decor.  You can have this crazy little doll sidestepping itself into some kind of demented Irish jig in your haunted Halloween graveyard or haunted house.  Of course, some might just laugh at the little-zombified loon! 🙂  Learn more or purchase the Animated Zombie Gnome Doll.

Oddly enough despite the addition of the standard zombie guttural growling sounds Zombie Gnomes still will perform a random snide sinister cackle as a normal Gnome would.  It’s merely a reflex action as they are no longer self-aware, and are simply mindless flesh eating machines!

We love all things Halloween! Whether it's glee of trick o treating, the iridescent allure of the autumn season, or the spooky mystique of supernatural beings. Enter the world of Halloween all year round on our All Hallows Blog.
View all posts by Halloween Haunter →
This entry was posted in Animated Halloween Props, Gnomes, Halloween Decorations, Halloween Shopping, Zombies and tagged Zombie Gnomes. Bookmark the permalink.