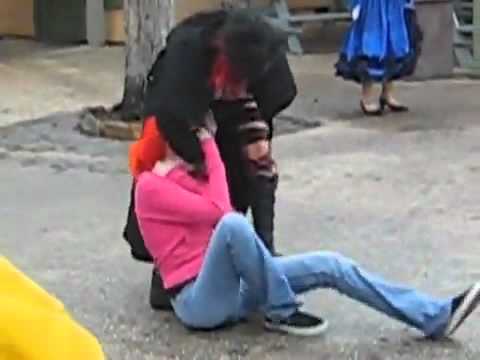 I thought the video below was fake at first because of the bloody red water, the ridiculously flagrant flamboyance of this emo-like fool, and the near-instant transformation of the girl into a Vampire. It usually takes 24 hours or more for a human to transform into a vampire. Gnomes blood is a realistic option for vampires to exist temporarily in sunlight. However, that wouldn’t explain how the transformed girl had no issue with the daylight. It does appear to be cloudy which does filter the holy rays of the sun to a certain extent. Before I dismissed the video I placed a few calls to my paranormal investigative contacts in San Antonio, Texas. Diana Robespierre, President Of The Texas Supernatural Anti-Terror Society, was involved with the incident. Her investigations concluded that sinister events had taken place at the Six Flags Fiesta.

A young vampire of the Eleventh Generation, named Bloodworth, formed a demon worshiping cult around himself. He’s the vampire in the video along with being an effeminate over the top emo who was obsessed with vampires even as a human. A vampire Knight named Avia foolishly brought him across into the sanguine shadows of eternal damnation hoping he would act as a loyal squire. However, Bloodworth, Esquire had other plans and quickly became a pain in her royal ass. She tried to slay him with her silver sword but he escaped and rather quickly fell under the protection of a powerful demon. Avia cut her losses and washed her hands of the nutty vamp!

Bloodworth was given power by an Archdaemon, named Thoraxis, who opposed the Devil. Most vampires worship the Devil as their Dark Lord so Thoraxis was eager to gain any disciples even if it was a silly loon like Bloodworth. The direct demonic power allowed Bloodworth to rapidly transform vampires who could in turn withstand the daylight on cloudy days for a few hours. Notice how Bloodworth carries an umbrella just in case the sun comes out. In order to curry favor with the Archdemon they had to commit several human, and animal sacrifices. The blood-red in the water is real blood coming from a concrete maintenance room underground where they performed these unholy supernatural sacrifices. For at least two weeks the cult managed to secretly commandeer the grounds of Six Flags which included hypnotizing key personnel.

Eventually, The Texas Supernatural Anti-Terror Society and other paranormal professionals moved in to take down the demonic vampire cult. A special team of Archbishops was called in from The Vatican to exorcise the powerful Archdaemon Thoraxis from the grounds which had been blessed unholy by Dark Priests. Thoraxis would possess random humans, animals, and even inanimate objects. He was finally driven back to hell, and as usual, the government arrived once most of the action was over. A couple of men in black from the US Paranormal Defense Agency, posing as FBI, did their usual PR spin saying it was some type of Halloween promotion. Certainly, Six Flags cooperated to avoid an alarming media frenzy.

Most of the vampires were killed. However, some were taken to a special center in Idaho for vampire reprogramming for the purpose of working for the government. Luckily Diana Robespierre is a compassionate person and can see the potential for good in the paranormal. Even those with demonic DNA such as vampires. Only a handful of the vampires were allowed to be released as they still had enough humanity left in them to be trusted. The rest had to be staked, and holy fired to dead. Since Thoraxis is no longer connected to them they don’t have the power to be in daylight or rapidly transform people into vampires anymore. Bloodworth, unfortunately, escaped despite the hail of gunfire laden with silver, and hickory wood bullets. At the time he still had Archdemon protections in place.

Bloodworth obviously healed because he’s been spotted in a number of cities around the world. He hasn’t had a chance to re-form his cult due to having paranormal professionals such as Vampire Slayers after him. Then there’s the government and the vampire community who both have bounties on his hilarious head. A bounty placed personally by Transylvanian vampire royalty who don’t want vampires exposed to the general public. They’re also enforcing the Supernatural Secrecy Pact. Although, the incident wasn’t big enough to warrant Angelic intervention. In such a case this video wouldn’t even exist anymore. If I ever run into this Bloodworth character I would probably just plunge my hand into his chest, and pull out his heart. I assume he’d scream like a girl before vaporizing into ash!🧛‍♂️