The video above is a frightening prank where horror moviegoers are spooked by a man posing as a machete-wielding killer. What if that man was indeed a real serial killer out for flesh and blood? A setup similar to the video proved to have deadly consequences when a lone nefarious figure set his sights on those out for a leisurely Friday night on the town.  Our paranormal investigations uncovered the existence of a top-secret underground government facility in Iowa under the guise of a working farm on the surface.  A variety of genetic experiments were taking place in which humans were injected with supernatural DNA to enhance strength, speed, agility, and senses.  However, it generally drove both the willing & unwilling subjects quite nuts! 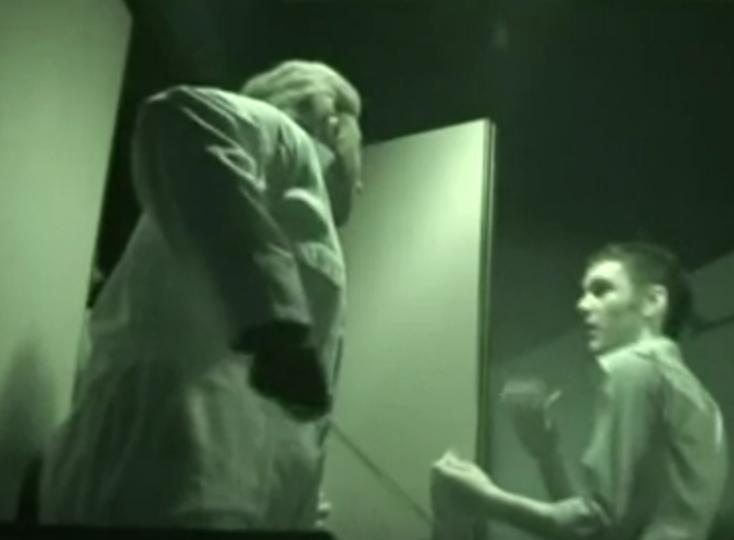 On Halloween Night sometime in the early 1990’s, one sadistic subject gone mad escaped and perpetrated a diabolical serial killing spree!  This is The Horror Movie Hackers hellish story!  Some details like the location and exact date of the incident have been so thoroughly wiped from top-secret records that not even our insider government sources could provide it! Also gleaming more clues than the general urban legend could alert the government to a mole in its midst.  In the end, the public has a right to know the various terrors that paint a sanguine path across the alarming American landscape!

A Deadly Figure Emerges From The Darkness

It was a cool Autumn night in a small town in Iowa sometime in the early 90’s.  A movie theater not too far from the top-secret government farm was showing a horror movie marathon on Halloween night. They hired an actor to dress in a costume that somewhat resembled Michael Myers from the Halloween movies. In fact, Halloween was one of the movies being shown. He was wielding a harmless rubber machete to scare and amuse patrons just as seen in the video above. Unfortunately, a dark denizen of evil had other plans.  A mentally ill individual with superhuman strength who escaped government experimentation. Paranormal Defense Agency records list him only as Subject X-33B.  In this article, we’ll merely call him Subject X.

Early on in the evening near the start of the movie marathon Subject X quickly dispatched the actor playing the fake serial killer by snapping his neck.  He then put on the dead man’s costume complete with menacing mask. The crazed killer replaced the rubber prop weapon with his own razor-sharp steel machete which he probably acquired on the farm housing the government facility. As moviegoers would walk into a small corridor on their way to get snacks, or use the restroom they would be brutally picked off one by one. He’d also quickly grab people sitting alone from the back of the theater, and drag them into the corridor as well.

A Crazed Yet Calm Killer Stalks His Victims

The bloodied corpses of the innocent victims were dragged off into a storage closet nearby.  The dim lighting of the theater was ideal for nobody to notice the blood trails on the floor. Naturally sticky floors were something everyone expected in such a place so nothing was seen as suspicious. During intermissions when masses of people were in the lobby he stood amazingly calm looking upon each person with contempt as he imagined murdering them later on.  He would also lurk into the nearly empty movie halls, and take down whoever was the most vulnerable.

The Bodies Begin To Stack Up!

For hours Subject X took innocent victims down one by one, two by two, and even three by three courtesy of his enhanced strength, speed, and agility. Nobody thought anything was out of the ordinary when blood-curdling shrieks could be heard bellowing forth throughout the chaotic cinema. Folks watching the film were screaming while actors in the film itself were screeching. Also, everyone knew about the supposed fake serial killer making people cry out in jovial terror in the hallway. Some who escaped, without actually knowing they were in danger, to begin with, said they saw bodies but assumed they were props amid the realistic horror presentation.  At that point in the evening, the closet was stacked with bodies, and he was bringing them out back to the dumpster outside.

The Horror Of The Final Carnage!

As the Witching Hour approached he grew madder with murderous lust so he killed all the employees in the lobby, and back office.  Then entered the theater that had been packed at the start of the evening. He chained all the doors and began targeting the final victims amid the thinned-out crowd. Naturally, nobody thought much of the small crowd in the auditorium that was packed at the start of the night. They probably just figured people got tired and went home.  Subject X began to slaughter everyone in the dark theater.  It took some time before people finally realized this was real despite the insane screams, pleas for help, and blood spurting about wildly onto the seats, walls, movie screen, and other moviegoers. It’s amazing how complacent and safe people can feel in this dangerous world! Some attempted to fight back but it was futile against this heavy set supernatural juggernaut that was well over 6’4″ 275 pounds.  A few did manage to escape the carnage but they were never the same again.  Most have been institutionalized for decades!

The Capture And Containment Of A Supernatural Serial Killer

Once his dark deed was completed Subject X managed to escape as the wailing of police sirens, and medical rescue personnel could be heard closing in. Not too long after law enforcement was on the scene there was a media blackout and record scrubbing by the government.  Despite Subject X cutting out his tracking chip, there was enough residual radioactive matter in his bloodstream from experiments to track him to a bedding store nearby.  He had crashed through the window and collapsed on the bed in exhaustion from his satisfying slaughtering spree. He immediately awoke as Government Agents attempted to apprehend him alive. He fought them off easily with the men and women suffering many injuries. Thankfully, only a few were fatal.

The Agents had to shoot him with over 20 elephant tranquilizers before he finally passed out! They then transported his sorry ass back to the underground government experimentation facility. Our insider government sources couldn’t find any additional info on the Subject but he could possibly still be alive since they completely close a file if the subject is deceased. Unfortunately, Subject X’s file is still open!  Is he a top-secret weapon of the government?  Did they perfect the paranormal genetic engineering?  We may never know. Hopefully X, and his experimental cohorts will never be unleashed upon the unsuspecting general public ever again!

Always Be On Alert! Assume Everything Is Real No Matter How Insane It Seems!

Let this be a lesson to those attending Halloween, and horror events! Always be on alert, and wary of these simulated scare tactics at haunted houses, amusement parks, and movie theaters. It could very well be the one isolated time that a deranged psychopath is behind that frighteningly foreboding mask. Don’t meet your maker in such a senseless way. Avoid such risks at all costs, and live to have a safe happy Halloween!