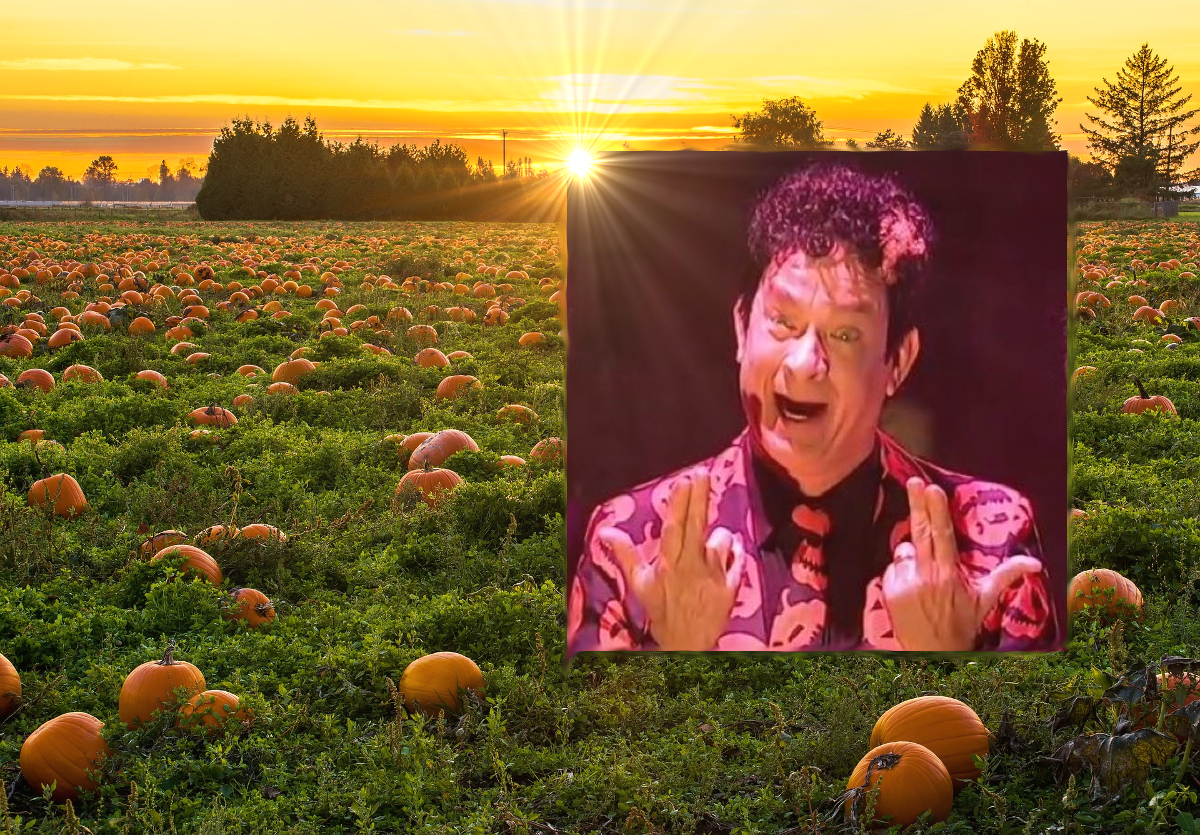 You may have seen the infamous Saturday Night Live skit featuring the wacky David S Pumpkins as played by Tom Hanks. However, you may not know that David Pumpkins is a real enchanted entity. One of several supernatural Halloween Beings. The supernatural world has a habit of informing humans of various things in the guise of fiction whether it be in book, TV, or movie form. The story of David is no different. He is known for wearing his terrifically trademarked Jack-O-Lantern Suit while declaring his name with jovial pride. His hair-raising helpers in his Halloween mission are what appear to be two humans in skeleton costumes and makeup. The puzzling trio enjoys creepily break dancing to weird music that comes out of thin air in the Spirit Of Halloween.

In real life, David S Pumpkins is an important associate of the Queen of Halloween Shala. He is the most recent addition to the Queen’s cavalcade of characters ever since she stepped out of the supernatural shadows in 2013. This after centuries of hiding from those who would do her harm because of her Angel-Demon Hybrid nature. David acts as an Ambassador for Shala’s Halloween Island, and also as her messenger to the world. His skeleton buddies are in fact sapient zombies who have decayed to a bony form. However, some have also referred to them as ghosts. Most likely because of their astral projection abilities. Any paranormal powers they have outside of their zombie nature are granted by proxy through David. They act as enforcers, or simple assistants when needed on David’s various Halloween missions around the world.

The Mysterious Origin Of David Pumpkins

Mr. Pumpkins is a human who was born at the exact Witching Hour of

Halloween on October 31st, 1931 (10/31/31). It is said that 31 months before this there was some special supernatural event that prophesized the birth of a special Halloween child. One even beyond that of the normal powers seen in those born on this hallowed day. So in a way, he was born on 31/31/31. Despite being over 80 years old he appears to be in his 50’s since the Halloween Spirit is slowly anti-aging him! From the day he was born he indicated a natural love for Halloween. He ignored most of his baby toys and wanted to cuddle up with a Jack-O-Lantern! David’s love for All Hallows Eve only grew greater in adulthood as he continued to celebrate it with an innocent childlike passion. This eventually caused the Spirit Of Halloween to become deeply infused into his very immortal soul!

Queen Shala finally felt this trait unique to an adult and waited several decades before secretly sending him on a Halloween quest as a test for induction into the paranormal community. Various clues and seemingly coincidental signs led him on a trek around the world until he found Halloween Island. In addition to his utter allegiance to Halloween Shala probably liked the fact that he knows how to keep a secret and appears to not say much more than his name. The proud Pumpkins moniker he bellows forth with exuberant glee! It’s not known if that’s his birth name or something he bestowed upon himself.

The Halloween Queen imbued David with a mystical connection to the Spirit Of Halloween already infused in his soul yet not previously accessed for the purposes of paranormal power. This power is for his own protection and that of the hallowed Halloween cause. The noble quest of bringing balance between light and darkness in our reality. David has the power to directly access The Halloween Spirit and utilize its enchanted energies for all manner of purposes including magic. These energies have been slowly de-aging him and it’s thought he is immortal. He has also been granted enhanced strength, speed, agility, and senses including the 6th form granting him some psychic abilities. David has the powers of telekinesis and levitation included in that skill set. In his infamous SNL skit, he was seen magically appearing behind a scared couple in an elevator. This was due to his teleportation abilities. Mr. Pumpkins may also call forth various invisible nature deities related to Autumn or Halloween.

On October 28, 2017, Saturday Night Live premiered The David S Pumpkins Halloween Special. An animated cartoon featuring a weird dim-witted David inadvertently saving Halloween from a gang of candy-stealing punks. In the end, some noble lesson should have been learned but all David cared about was pigging out on Halloween candy. The real David Pumpkins is simply childlike rather than being classically less than intelligent. He does love to voraciously devour Halloween candy but he adores the Spirit Of Halloween, and his beloved Queen Shala, even more! In addition, his deep desire for All Hallows Eve candy isn’t merely glutenous behavior. Halloween Candy is imbued with the Halloween Spirit which further fuels David’s supernatural powers. The cartoon also hinted at Molecular Manipulation powers when he turned a strawberry car back into its fruit form. There’s been no confirmation on whether this is true or not? It wouldn’t be surprising if he could manipulate pumpkins in various ways.🎃

Hopefully, The David S Pumpkins Halloween Special will follow in the footsteps of It’s The Great Pumpkin, Charlie Brown as an annual hallowed Halloween event for both kids, and adults to enjoy!

David Pumpkins Signature Move Is Seen Below. It’s said to be a secret sign language spell that invokes the Spirit Of Halloween to access his various powers and abilities. If you follow the forces of darkness and think this is a joke then think again! When you see Mr. Pumpkins signing it’s time to run away as fast as your feet can carry you!

The Mainstream Media Explanation For The Origin Of David Pumpkins