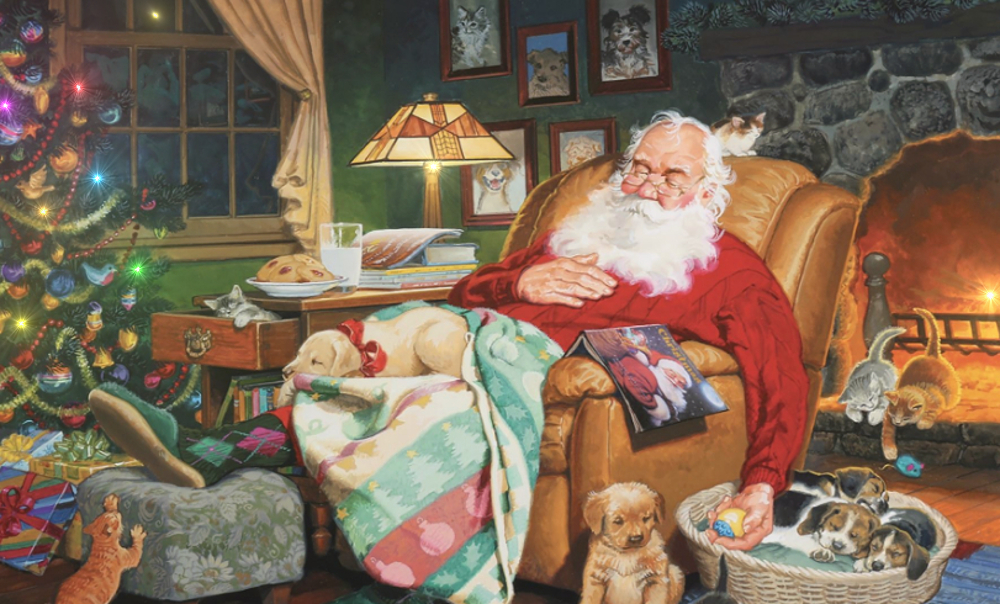 As an Immortal Demi-Angel, aka Angel-Human Hybrid, Santa Claus usually only needs two hours of sleep per night to feel refreshed. Although, he can go for several days without sleep and still function just fine. This is why he can deliver gifts around the world all night long without any physical issues. Despite the requirement for very little sleep, he will often slumber more than two hours a night. Sometimes to enjoy the enchanting vivid dreams of lucidity that come with being an angelic creature that lives at the magical North Pole City. Also, just to be near Mrs. Claus who needs about 4 hours since she’s a human Immortal. It’s not that uncommon for all manner of immortal beings to sleep longer than they need to as it is a mystically relaxing event.😴

When Santa Gets Tired

Santa Claus can get tired if he overuses his paranormal powers. He certainly requires a bit more sleep after his monumental Christmas routine. Utilizing extraordinary abilities like Chronokinesis, aka time travel, can drain him of energy until his enchanted angel essence recharges. He has naturally found himself quite tired after his various fights with his evil twin brother the Anti-Claus. There’s not only the effort involved but also the spiritual duality they share. The battle of balance between light and darkness can be quite taxing on metaphysical energy reserves. After such energized engagements Santa may sleep several hours longer than usual. Thankfully, in addition to sleep, Santa Claus can eat a ton of food to get his energy back. He can even directly absorb energy from various sources both physical and spiritual. This includes the Spirit Of Christmas itself.🎅

😴Take A Free Master Class On Lucid Dreaming! Craft A Magical World For Yourself Each Night!