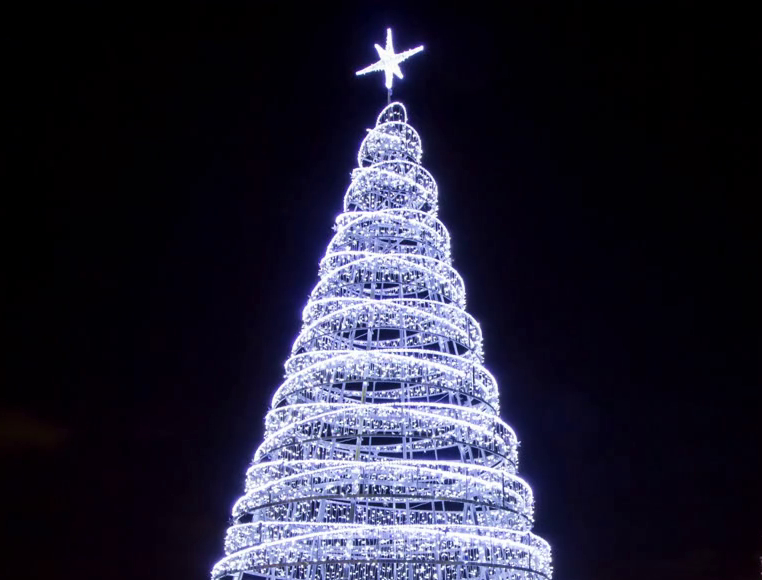 The Tower Of Christmas Past is the tallest structure at North Pole City. It is built around a temporal anomaly. A literal upside-down time tornado has been slowly forming over the centuries due to the ever-growing power of the Spirit Of Christmas along with a number of magically convergent factors unique to Santa’s winter wonderland. It’s thought that Santa Claus’s holy Angelic energies along with the magnetism of the North Pole initially set it off. Around the 1600s a noticeable time distortion began taking shape. Elves, Reindeer, and others were disappearing into the past. Santa Claus ended up retrieving them with his Chronokinetic Powers. He then utilized an Enochian Angel Magic spell to contain the space-time disturbance. There was talk of trying to destroy it but it could possibly have blown up the entire Earth!

By 1852 magic spells alone could not keep the anomaly at bay. This came to fruition during what is known as the North Pole Time Event. Several time frames began overlapping causing chaos and temporal paradoxes at the North Pole. The solution was the building of the Tower Of Christmas Past to permanently contain the vexing vortex. Thankfully this occurred in the Spring which allowed all the Elves to build it through Summer. If it had happened during the Christmas Season then compromises would have had to been made.

The Tower was completed on August 27, 1852. It was built in the shape of a Christmas tree with a lit star on top that dissipates any excess enchanted energies that might jeopardize the super structure.  Most of the Tower is made of supernatural glass with a metaphysical matter metal framework. Such matter was made from the solidified metaphysical energy of time itself. The spiraling structure is strewn with Christmas lights that can change to infinite colors!

The titanic tower has several floors. New ones are added every so often as the temporal tornado continues growing. This happens when any given floor can’t hold the temporal tempests of any given era of time. Oddly enough the new floors are added at the bottom courtesy of low gravity caused by the amazing anomaly itself. Once construction on the Tower had begun Elves were amazed to find that they could see the past of North Pole City! At any spot, one can see a past time frame out the wondrous windows. Once inside the glass entry doors you actually see yourself just before you entered the building! However, if you exit quickly your still in the present since the doorway is enchanted to prevent paradoxes. At the very top, one can see back in time over 800 years ago to the date of January 1st, 1210 when Santa officially blessed and founded North Pole City. However back then it was simply known as North Pole Village.

At the center of the structure is a giant hourglass of shimmering gold sand that magically regulates the time tornado to keep it under control.  Around that are spiral staircases to various floors along with four elevators. In 2018 the Tower Of Christmas Past exceeded the tallest thing in North Pole City next to the glimmering glacial walls around the entire perimeter. That being the giant Christmas Tree in the center of downtown. This despite the immortal holy tree continuing to eternally grow.

The Tower is a wonderful live record of what happened in the past of the North Pole. Of course people are confined to what they can see from the building with binoculars and telescopes. It’s also located on the edge of North Pole City since it is so huge. That limits views as well. There is no way to influence the past as people inside can only see out into the past while from the outside nobody can see inside thanks to mystical glass. Many people wave at the Tower and even hold up signs thereby communicating with their future selves or even visiting descendants. Great Grandkids always get a kick of seeing Grandparents they never got a chance to know. It was noticed that electronic communications were possible so signals have been blocked from leaving the structure. Although you can hear radio and other signals from the past. Even TV transmissions.

There was an incident some years ago where a warrior in the supernatural community had lost his child. He ventured to North Pole City for the purpose of traveling back in time to save him. He had asked Santa for help but he was bound by Universal Law not to change things that were meant to be. The man then entered the tower at the right point and used enchanted explosives created by a powerful sorcerer to blast a hole in the extremely strong glass. He rappelled down the side of the Christmas tree tower and evaded Elf security. He stole Santa’s sleigh and raced away into the cold arctic night!  The reindeer were forced to cooperate via a powerful hypnotic spell.

He was about to save his son when Santa stopped him. The man began beating on Santa but the blows did nothing to the Demi-Angel. The man finally broke down sobbing in Santa’s arms. Santa showed him that had his son lived millions of other people would have died due to a butterfly effect of events. In his capacity as Saint Nicholas, he took the man to Heaven to visit his son. Each Christmas he, his wife, and other children return to North Pole City where his beloved fallen Son descends to spend Christmas with them.