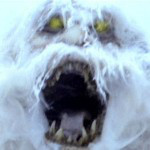 Winter storm Iola laid the foundation, and now the impeding blizzard of doom Winter Storm Juno is set to create a blinding maelstrom of Arctic angst in the Northeast United States.  Weather that is causing a mass migration of Abominable Snowmen, aka Yeti, into the US Northeast.  These blasphemous behemoths are quite intelligent as they stalk their prey.  Mainly humans as they seem to enjoy harassing sapient creatures.  Their winter white fur aids in their human hunting, and they could easily be lying in wait right next to you in winter weather without you knowing it!

The Abominable Snowman can get up to 9 feet tall, and weigh 800 pounds.  Their razor sharp teeth, and claws could shred you to a bloody pulp in seconds as they devour you with rabid glee.  The danger of the storm itself is only one reason not to venture outside. The real danger are the large number of Yeti that will be roaming about.  It’s rare for a Yeti to enter an urban area so those folks are pretty much safe…well until the late hours of the night anyway.  Rural areas are their territory of choice.  Thankfully there aren’t too many incidents of these hellish horrors crashing through homes to devour people since they loath warmth.  This is the time to jack up the heat full on! Even if you’re stranded in the snow in your car just keeping the heat blasting can save your life.

Since the Abominable Snowman isn’t demonic based religious artifacts won’t repel it.  Thankfully as usual Mother Nature provides us with protection.  A small shrub called Arctic Willow (Salix arctica), the northern most woody plant on Earth, mixed with Reindeer Lichen (Moss) (Cladonia rangiferina), an Arctic fungi, along with Antarctic Pearlwort (Colobanthus quitensis) has been shown to repel the Abominable Snowman.  Hanging these plants in windows, doorways, and carrying them on your person is prudent.  Even mixing them with water, and loading them into a squirt gun can be used as a repellant for a quick get away.

Just know if you’re outside shoveling, and you suddenly hear an unholy guttural growl coming from high up behind you then you’re already dead!  Don’t say we didn’t warn you because we will!  Oh my that was brutal! 🙂

For more information on the Yeti see our past Abominable Snowman Warnings.