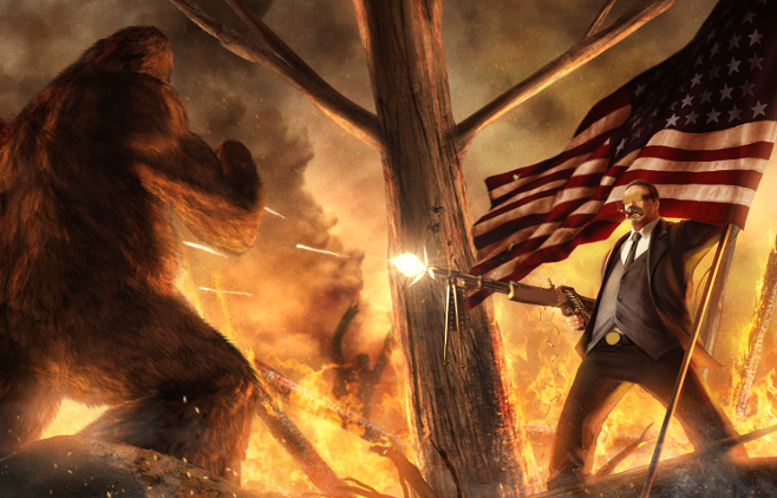 Since 2017 Mystic Investigations has been tracking an ever-growing Sasquatch rebellion. The Bigfoot, sometimes called the missing link, are a distant relative of humankind genetically altered by extraterrestrial’s experimenting with the supernatural in North America. They were the first intelligent species on the continent. These gentle furry giants welcomed the Native Americans who migrated here from Asia and the Pacific Islands. Most tribes saw the Sasquatch as a sacred creature to be revered. Some even worshiped them! The Bigfoot later aided Natives with the new Werewolf threat and later the arrival of European immigrants. Certainly, the Natives and Bigfoot shared the common threat of intolerable invaders. As modern civilization grew the proud Sasquatch people were forced further into the deep forests and mountainous regions. They only wished to be left alone but non-Natives refused to do so! They sought to uncover their secrets and even hunt them down! Eventually, the Bigfoot was somewhat forgotten amid the folklore of other paranormal beings and also unverified tall tales of the great American West.

Things began to heat up again for the Sasquatch courtesy of the infamous 1967 Patterson–Gimlin Film shot in Northern California. This was the re-birth of the Bigfoot research and hunting movements across North America from sea to shining sea. Things only got worse in the 21st century with the advent of ever-increasing convenient photographic tools, tracking equipment, and mass social media. We even have TV shows centered around the hunt for Bigfoot. Sometime in the 2010’s a group of Sasquatch reached out to the small Demi-Bigfoot community for help. Indeed Sasquatch have mated with humans! The Demi-Bigfoot began creating a network to spread the word of a coming war between the Sasquatch and mainstream human society. By 2017 a nationwide effort was underway. The Bigfoot Communications Network is thought to be a combination of modern technology and old world methods that may include Native American smoke signals. The Bigfoot Hybrids most likely handle the technological end as Sasquatch shun sophisticated society in the same way the Amish do.

By early 2018 some minor skirmishes began taking place across the United States with a few in Mexico and Canada. Ultimately local Bigfoot Hunters, private paranormal firms, and the US Paranormal Defense Agency squashed these rebellions that were a direct response to the invasion of Bigfoot privacy. As with all supernatural events the government actively covers up such incidents. On August 14, 2018, things finally came to a head when a bizarre hashtag appeared on social media. The hashtag “mp; saf” was a secret warning code for the government that indicated a serious coordinated nationwide Sasquatch uprising [mp = Major Paranormal / Nationwide. saf = (sa) Sasquatch and (f) = fight.] Thankfully the secret US Paranormal Defense Agency in conjunction with members of the supernatural community repelled the alarming effort to overrun our society!

Since then things have remained somewhat quiet as the Sasquatch regroup and look to reevaluate their plans to rid themselves of dangerous humans! Still, there have been some abductions of people who may prove useful to the Bigfoot cause. It is sad things came to this point as the Bigfoot have been mostly peaceful creatures unless provoked. Clearly, they are no longer on the defensive but now on a major offensive! The Sasquatch are angered by the human invasion of their sacred lands. This is evident in the way they’ve mentored their Demi-Sasquatch kind. Mystic Investigations ran into one with his child at an amusement park recently. Both were rather reprehensible! They believe they are the master race and should inherit our world! That being said there are good Demi-Sasquatch such as a Bouncer named Mr. Altec who works at our local paranormal Club 13. He has been an invaluable informant on the misguided Sasquatch war against humankind!

While the government and various hardcore Bigfoot Hunters now triple their efforts to expose, capture, and kill Sasquatch others like Mystic Investigations work toward brokering peace. In conjunction with our Native American allies, we hope to end this violent crisis and aid in repelling those who would harm the noble Sasquatch. We know many of you have a deep interest in Bigfoot but we implore you to respect their privacy and leave them alone in their remote rural abodes. Only those who commune peacefully with nature may meet the Bigfoot and develop a symbiotic kinship with them if deemed worthy. At the end of the day we can’t grow complacent with the fact that we greatly outnumber these usually gentle giants. Their power is immense and they are immune to magic! They are a titanic force to be reckoned with!

Interesting Fact: The Sasquatch were set to be allied in battle with the Earthly Gods And Goddesses in the War Of Armageddon. However, the Nature Deities aren’t happy with the recent violence between humans and Bigfoot.

The Infamous 1967 Footage That Started The Modern Hunt For Bigfoot!

It is thought that the Sasquatch in this video was actually shunned by his people as an outcast for so blatantly exposing their kind to the world. 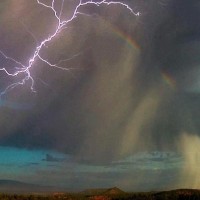 A Clurichaun, aka evil Leprechaun, hunting team was on the trail of the Lilliputian purveyors of dark luck when they happened upon the awesome sight as witnessed in the video above on April 8th, 2015.  A Leprechaun-Unicorn transport rainbow appearing in the thunderous skies amid a titanic tornado.  Reports indicate that a Leprechaun was in Medicine Lodge, Kansas meeting with a group of Native Americans composed of many tribes.  A secretive supernatural group called The Wichita Warriors that specializes in fighting the forces of paranormal darkness. It seems they saved a Unicorn from a rabid group of Clurichauns attempting to use the magical creature for diabolical deeds.  The tribe partook of a special ceremony to summon the Leprechaun who took custody of the sacred Unicorn for return to safe mystical wooded havens on the Emerald Isle.

Unfortunately the Clurichauns were deeply angered by what they saw as the theft of their animal, and came after the Native American Warriors in droves.  The concentrated front of bad luck caused a massive tornado to form out of the control of local weather Goddesses, and Nymphs.  The Natives pleaded with the Leprechaun to make his escape while they held his bad luck brothers off.  The lucky little fella complied, and immediately sprung atop the noble gleaming white beast with golden horn shimmering majestically forth.  The combining of the two supernatural beings powers were needed to form a metaphysical transport rainbow to Ireland due the dark luck dampening field spread by the Clurichauns.  They escaped their evil brothers, and the brunt force of the dark luck tornado as the Leprechaun trusted the Native American Wichita Warriors with his good luck pot of gold. 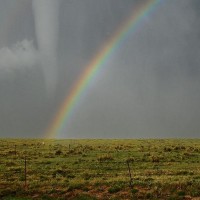 shield to protect them from the tornado as they valiantly fought off the Clurichaun scourge.  Evidence indicates they secured a victory against the Clurichauns courtesy of a Sasquatch who acted as back up to this amazing group of supernatural warriors.  The Big Foot has always been a friend to Native Americans.  Their immunity to dark magic, and luck came in handy.  This battle resulted in some human injuries that included Clurichaun bites.  Thankfully there were no human nor Sasquatch fatalities.  However the Clurichauns saw some casualties, and captures while only a few escaped.  The Clurichaun Hunting crew that captured the video above managed to snag the rest of the fleeing mini masters of mayhem.  Clurichauns now the subject of study at a private top secret supernatural Cryptozoological research center in Colorado.  As the dark luck front dissipated so did the terrible twister due to local weather deities regaining control. 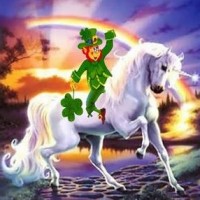 The victory for the forces of good isn’t the only wonderful news here.  It seems a lucky 58 year old woman nearby witnessed the Leprechaun riding the Unicorn as the rainbow formed.  She was a member of the Clurichaun Hunting team. Witnessing a Leprechaun riding a Unicorn has been known to grant humans immortality, and an eternity of good luck since the sight is so beyond rare it magically alters a person.  It’s said to be related to the photons bouncing off the miraculous vision being paranormally altered.  Then these paranormal photons enter a persons eyes which are the window to their soul.  There’s also the fact that these supernatural photons only enter one persons eyes.  In other words if a group were present only one person would witness the rare event. That is unless they themselves had supernatural powers of some sort. We also have the addition of a supernatural rainbow formation, and the dynamic lucky duo entering it.  A previously unknown witnessed event.  At least it’s never been recorded.

The woman’s name is being withheld to protect her from public scrutiny, and violation of the Supernatural Secrecy Pact.  However this extremely lucky lady needs no protection with the luck she will relish the rest of her eternal life!  The Native Americans stumbled upon her after the Clurichaun battle, and dissipation of the tornado which she survived standing in an open field.  None of the Natives witnessed the Leprechaun-Unicorn event since they were engaged with the attacking Clurichauns.  The Native Wichita Warriors sensed the woman’s transformation, and discussed it with her colleagues. The wise Natives gave the woman of eternal luck advice about her bright future.  The lucky event not only gave her immortality, eternal good luck, and anti-aged her to what appears to be her early 20’s but she also possess Rainbow Light Manipulation Powers. This may include rainbow generation, teleportation, invisibility, healing, and use as a weapon with the possibility of rare Rainbow Fire Powers!  This is the power of good luck interacting with humans Junk DNA that posses a wide range of latent telekinetic powers courtesy of our higher dimensional souls!

amazing abilities for use in the fight against evil as the various Battles Of Armageddon approach.  In addition she has given herself the superhero name Rainbow Warrior.  The Wichita Warriors believes she is the first step in fulfilling the Warriors Of The Rainbow Prophesy.  A future group of individuals who would save the Earth from environmental destruction. It certainly is quite a coincidence that she is half Native American, and half European.  The prophesy is also about bringing together the Native stewards of nature, and those whose ancestors were responsible for defiling the sacred lands of Goddess Gaia Mother Earth.  This is also a sign of the impending Third Battle Of Armageddon.  We here at Mystic Investigations wish The Rainbow Warrior well on her exciting eternal quest for justice, and hope to meet her in the future!