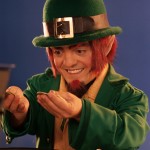 As St.Patrick’s Day approaches be on the look out for Leprechauns scurrying about fields of clover searching for Shamrocks to fuel their tiny bodies as they spread good luck about the world.  For most of the year they reside in Ireland, their nation of origin, but as March approaches they begin the exodus to the four corners of the world.

They are no taller than 3 feet and are of no threat to humans unless you attempt to steal their gold, which powers their good luck, or harm them in some way.  The gold is enchanted by the magical pot they reside in.  It’s always hidden at the end of a rainbow which can only be found by using paranormal methods so it’s not likely you’d find it anyway.   That being said you can however capture a Leprechaun and not injure it’s wrath.  It’s bound by supernatural law to provide you with three wishes in order to secure it’s release.  Unlike a Genie, the Leprechaun grants wishes through the sheer power of good luck which means all wishes can’t come true.  The Leprechaun will inform you if the wish is possible and he is bound by a magical spell to tell you the truth.  This also means that wishes might not come true instantly.  Say you wish for one million dollars.  You will have to play the lottery, gamble, or do something to acquire it.  If you try you will 100% succeed due to the good luck imbued upon you.

If you wish to capture a Leprechaun then you will need to hide out in fields of clover and pounce quickly on to the little fellas.  You could also pick Shamrocks and use them as a lure in a trap of some type.  Just make sure not to harm the Leprechaun and use real natural grown Shamrocks.  Anything genetically modified is devoid of magic and luck.  They will be poison to a Leprechaun.

There is also an evil sub-breed of Leprechauns, known as Clurichauns, which can be quite dangerous.  They will be discussed in another posting.