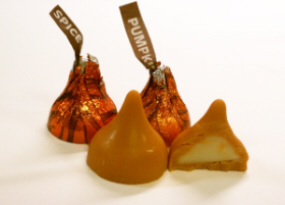 Xavier Remington, President Of Mystic Investigations here! The following post after this paragraph was from September 2014.  However still plenty of Pumpkin Spice Hershey’s Kisses for this years Halloween!  Our supernatural investigations offices are decked out in a frighteningly festive manner with generous amounts of candy, mostly chocolate based of course, resting delightfully in devilish dishes on most everyone’s desk! Of course there are a few Angelic grouches devoid of the All Hallows Ever Spirit!  I should fire them but then I’d be no better than them. LOL! Thankfully there are many treats, and good eats to the point of being able to have a complete meal as I walk about the facility!  Candy isn’t just for Trick-O-Treating but for the entire Halloween Season!

I just tried these Hershey’s Kisses not knowing what flavor they were because they were sitting in a Jack-O-Lantern bowl on my secretary’s desk.  It’s good to see the Spirit Of Halloween restored from 2013’s abysmal autumn devoid of said spirit.  This turned out to be due to Shala Queen Of Halloween being kidnapped by Dark Priests.  Thankfully she is free now, and all appears to be well after the Autumnal Equinox kick off of the Halloween Season.  Certainly all the candy dishes scattered about Mystic Investigations is a good sign.  I can’t wait until it gets into full swing, and I can actually have a complete meal by making my rounds to everyone’s desk….WHAT!?!  I would never do such a thing would I? 🙂

So I  ate this wonderfully dark orange Hershey’s Kiss thinking it was butterscotch,  or possibly even a new orange flavored variety.  As it melted in my mouth I immediately recognized the distinctive pumpkin spice flavor.  Not being a particular fan of pumpkin, or pumpkin pie, I was surprised how good they tasted, and proceeded to eat several more until our resident vampire, and Executive Vice-President Drake Alexander walked by.  He then said,”For Pete’s sake Xavier leave some for the rest of us!”  My reply was,”You don’t even eat food!”  He then unwrapped a delightful Kiss, and exclaimed,”This isn’t food pal!  It’s a little slice of Devilish delight.”  We both started laughing as he inexplicably ate one.  Our Vice-President, Witch, and Demi-Mermaid Rebecca Abernathy witnessed the exchange.  She decided to try one as well, and ended up loving it despite being someone who thinks seaweed tastes good fresh from the ocean, or even our saltwater aquarium.

Hershey’s Pumpkin Spice Kisses are the perfect treat for Halloween, and Thanksgiving as well.  Certainly something to wet the appetite before the turkey.  As for trick o treating the kiddies might prefer something a bit sweeter such as Chocolate Hershey’s Kisses filled with Caramel.  The Pumpkin Spice can be saved for the adults in your house, and those accompanying the costumed kids from door to door.  Why shouldn’t the adults gets something out of Halloween as well?

A Ghoul & An Out Of Control Unholy Fire

OMG the alarm just sounded here as I was writing this!  We got an emergency call for an unholy fire at the local 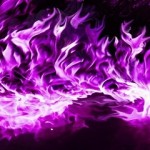 mortuary.  After I got back I took a monster trucking handful of Pumpkin Spice Kisses when nobody was looking! 🙂  Apparently a Ghoul was extinguished by the mortuary staff, and he burst into unholy flames.  Yes vampires aren’t the only ones who explode into great balls of violet hued fire.  Usually such supernatural flames don’t interact with normal matter but for reasons unknown the Ghoul was carrying a bottle of Unholy Oil which acted as a paranormal accelerant.  Thankfully the good folks down at the mortuary are somewhat aware of the supernatural world, and knew the fire department would be useless since normal water, and fire extinguishers would do nothing against unholy, or even pure holy flames for that matter. However they didn’t really know that.  All they knew was that a Ghoul, and the ultraviolet purple flames he produces at the end of his living dead life, aren’t something the local governmental emergency services can deal with.  Certainly the fact that not one of their several smoke alarms went off, despite being in perfect working order, was a sign of things being perplexingly paranormal!

Our paranormal team sped up in the Mystic Van, and raced into the facility with special supernatural fire extinguishers loaded with holy water blessed personally by our good friend Father Tom Davis down at The Church Of Holy Light.  It was a tough purple blaze hotter than Hell but we were victorious in the end! Quite a bit of residual unholy black smoke was created from the flames after the eradication of the fire.  Some of the mortuary staff, and my own paranormal staff suffered unholy smoke inhalation.  Fortunately Rebecca had viles of anti-unholy smoke potion made from various herbs, colloidal silver, and mystical micro infused crystals. We also used special vacuums to help clear the air of the vile vapors.  Everyone was well in the end, and I was surprised that the head Mortician had Hershey’s Pumpkin Spice Kisses sitting on his desk. Naturally I helped myself to a modest amount, and as I walked out a local paranormal reporter strolled up to ask what happened.  I told him what about the Ghoul, and then mentioned the Kisses.  He just stared at me in disbelief for a few seconds, and then said,”Man you sold out Xavier!”  He then walked away shaking his head.  Come on what the hell?!? Yeah buy Hershey’s Pumpkin Spice Kisses because they’re delicious, and you’ll love them!  🙂