You’ve Been Kidnapped By A Deranged Loon!

Posted on October 6, 2016 by Halloween Haunter 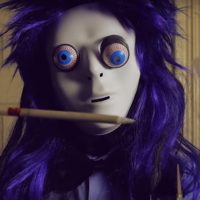 Chloroformed from behind you black out, and awaken in this room somewhat groggy lying on a physician’s exam table. As you sit up a man in an insane mask suddenly enters the room claiming he’s there to administer some manner of ASMR test.  You comply with his odd behaviour hoping his mild lunacy won’t flare into crazed rage! At the end of the test he exits the room. Now feeling fully awake you plot to escape. Unfortunately you realize your foot is tied to the table! You are able to stretch yourself to the door but it’s locked!  For the next year you are at the mercy of this guy’s odd little shows featuring you as his unwilling audience. You are well fed, and not harm comes to you. However when the authorities finally storm the place they find that you have been driven quite nuts along with a dozen other people found in other rooms within the old house in the woods! You end up spending three years in an mental institution before returning to normal life among the sane. Still there is a paranoia because they never found the man in the mask!

We love all things Halloween! Whether it's glee of trick o treating, the iridescent allure of the autumn season, or the spooky mystique of supernatural beings. Enter the world of Halloween all year round on our All Hallows Blog.
View all posts by Halloween Haunter →
This entry was posted in Halloween, Videos and tagged ASMR, Role Playing. Bookmark the permalink.