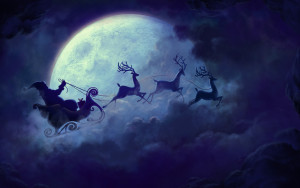 The Yule Moon of December is the only Moon of the year that’s almost consistently claimed by the forces of light on Earth! A Full Moon whose metaphysical energies are dominated by the Spirit Of Christmas as directed by the Demi-Angel Santa Claus. Normally Moonlight has some level of unholy light filtered from the holy sunlight. However the Yule Moon is generally holy light. Yet not so holy it repels all manner of dark supernatural forces as the sun would. Instead it tends to have a positive peaceful effect on them. Thankfully this year the effect is even greater courtesy of the Supermoon. Humans will find relief from vampires, werewolves, zombies, and metaphysical menaces during this time of paranormal peace! Read The Rest Of This Paranormal Activity Alert Here….