Where is Santa Claus exactly located at? 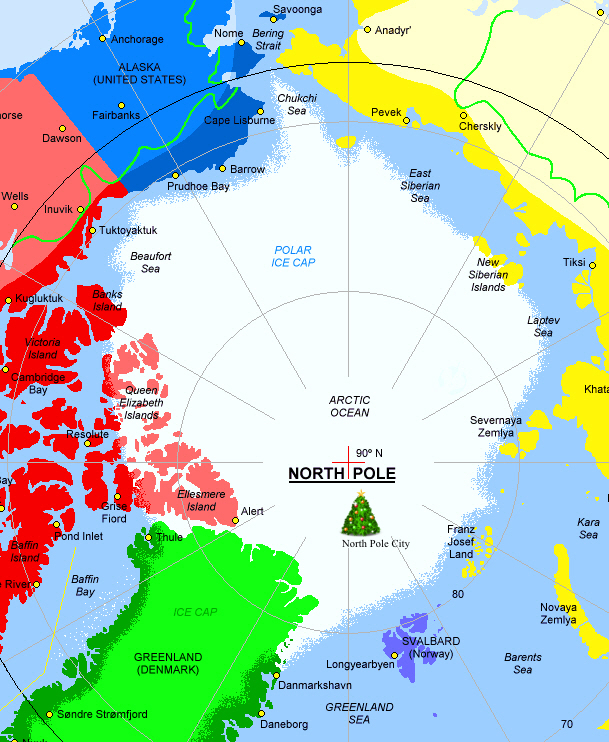 Santa Claus lives at North Pole City, North Pole, Arctic Ocean. We can’t give the exact coordinates due to the secrecy that must be maintained For Santa’s own safety.  However, we can give you a general location on the map below. Only invited guests, those who 100% believe in Santa’s existence, and highly motivated supernatural individuals can find North Pole City. The red crosshairs amid the “North Pole” on the map below indicate the geographic North Pole.  Nearby is Santa’s magically cloaked home amid polar snow, and ice behind glacial walls.  Spotting the Star Of Bethlehem means you’re very close.  This Christmas Star is the only direct light from Heaven to reach Earth and is only located above the quaint Christmas winter wonderland.

The exact address for North Pole City for postal purposes is:

Since North Pole City is a city-state the following address will do as well:

You may also substitute Santa Claus with Saint Nicholas, Father Christmas, or various other names he is known by in other cultures.  In addition, the North Pole City Elf Post Office will still deliver it with the simple address of:

Note that no zip code is required.  And yes Santa Claus does personally read every last letter he receives in a timely manner due to his Angelic power of super speed reading! Mrs. Claus will often read the best ones that Santa has set aside to be posted in the Hall Of Letters. The rest of the letters are preserved in the adjacent public archives.