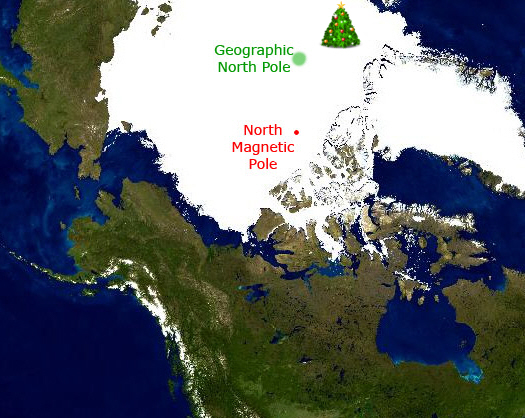 The hallowed home of Santa Claus is not located exactly on either the magnetic nor the geographic North Pole.  However, it lies within a short radius of the geographic North Pole as pictured in the illustration above. Clearly, it would be too easy for someone to find Santa Claus’s North Pole City if it was located precisely at either pole. And of course, if it was at the magnetic North Pole then his winter wonderland would constantly be shifting positions. Apparently, there would also be some electromagnetic interference in the cloaking spell that keeps the Christmas Capital invisible to the outside world.🎅

Speaking of the aforementioned shifting, the entire Arctic region is merely ice, and snow floating atop the Arctic Ocean. Ice that is always on the move sometimes traveling 30 miles a week.  So how does Santa Claus’s fortress of merry solitude not get destroyed, or stray from its permanent position in the polar region?  North Pole City is actually a mystical ice island fixed to its position in the Arctic Ocean by Heavenly Angelic forces marshaled by Old Saint Nick himself.  The Star Of Bethlehem, holy light shining directly from Heaven, is directly over North Pole City and plays some role in allowing the Christmas Island to stay in one place. All while the ice, and snow of the cold ocean flows around it.⛄️