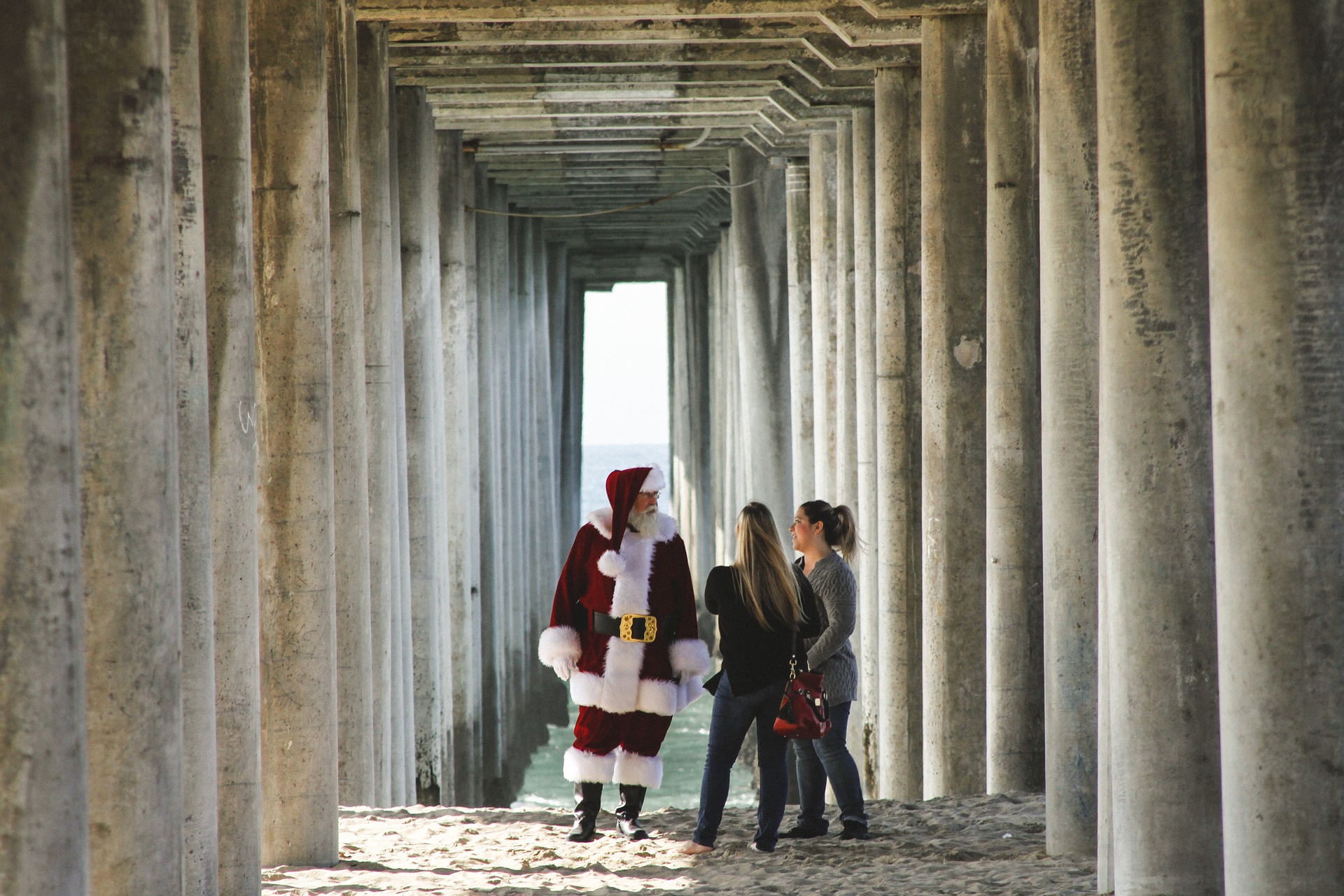 At an undisclosed location in California, sometime in August 2020, this photo of Santa Claus was snapped by a spy working for the Anti-Claus. Luckily, the dark operative was apprehended by the forces of good. His data was confiscated before the Anti-Claus could see it. We’re revealing this image as it relates to something that already happened. Santa is seen meeting with some good witches who summoned him via an Enochian Angel Magic spell. They heard he was real but weren’t sure until the summoning spell produced him under a beach pier. He had been walking through the evergreen forest at North Pole City with Frosty The Snowman and Rudolph The Red-Nosed Reindeer when he suddenly vanished!

The Witches told Santa the spell was in a locket passed down through the generations. That’s when Father Christmas remembered giving it to a young witch who saved some of his Elves from the Anti-Claus over 100 years ago. The spell indicated to use it only in an emergency of a supernatural sort. That emergency was an extremely powerful dark Sorcerer chasing them. He was obsessed with one of the witches. He said if he couldn’t have her he would kill her and the entire coven she belonged to. Most were hereditary witches who were related to each other.

A Dark Magician Is Afoot! 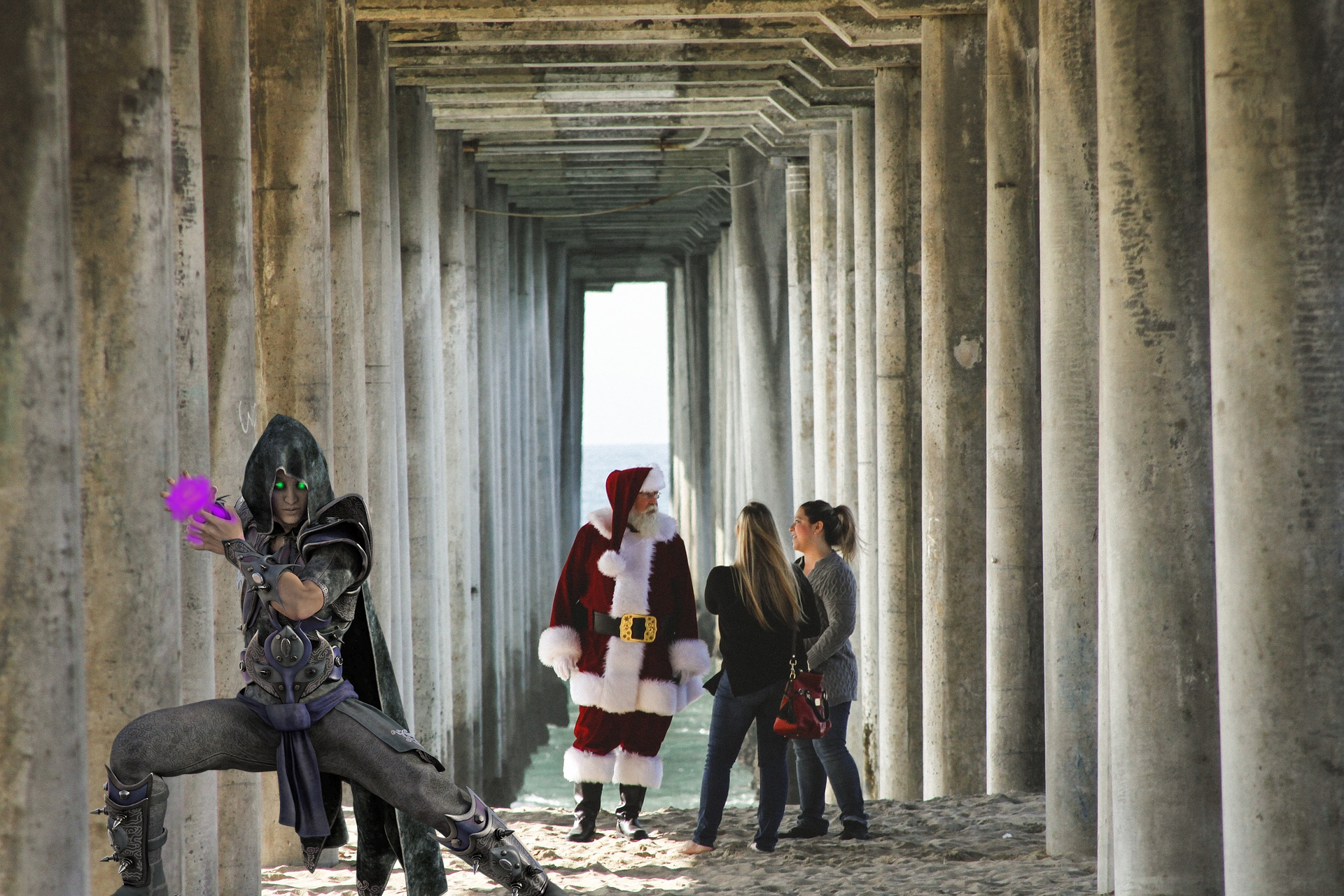 The Sorcerer Malachi lurked about under the dark shadows of the pier while taunting the witches. He came around a pillar and found Santa standing there with the scared witches behind him. Malachi was startled for a second before bursting out in laughter and saying, “A little too early for Christmas, buddy!” Santa chuckled, “Oh it’s never too early, friend.” The Sorcerer’s sinister smile turned to a scowl and he replied, “Okay the funs over! Step aside, old man! These witches are mine!” He tried to physically push Santa away but the muscular Demi-Angel Saint didn’t budge. Santa smiled silently and the angry Malachi stepped back so he could shoot some metaphysical energy balls at him. Two purple-colored orbs the size of basketballs hit him square in the chest with not even a fiber of his red suit disturbed.

The Sorcerer was shocked as he was not used to being bested. Santa then sternly said, “These women are under my personal protection by the power vested in me by the Spirit Of Christmas as Saint Nicholas!” Malachi responded, “Is this a joke! You’re really Santa Claus?” Santa nodded. Malachi then said, “Well that’s really something!” He acted like he was about to walk away when he quickly swirled around and shot blue lightning from his hands while reciting some spell in a long-dead language. Santa winced a bit as he held his ground. The lightning became progressively more intense which made him raise his hands to begin blocking the magical attack. Santa was then forced to counter it with white rays embedded with little glittering snowflakes coming from his hands. It quickly overwhelmed the Sorcerer’s dark power and sent him flying through a pier post into the water nearby!

a soaking wet Malachi screamed angrily, “This isn’t over you insolent witches! I’ll be back!” He then vanished in a flash of red light. Clearly, a teleportation spell sending him far away. Santa went with the witches to their coven’s lair. There he imparted powerful magical knowledge on accessing the power of The Christmas Spirit and various methods of repelling the Sorcerer should he return. He then blessed everyone and the lair as well. Santa bid everyone farewell and indicated they shouldn’t hesitate to summon him again if they face another paranormal threat beyond their powers. That’s when some Elves teleported in a flash of white light. They had been looking for him after he vanished from North Pole City. They all waved goodbye warmly as they were whisked away to the Christmas Capital of snowy dreams!🎅