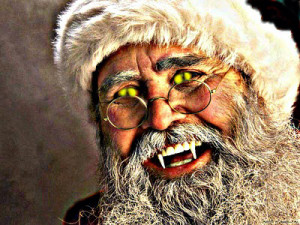 Most people revel in the joy and warmth surrounding the events of Christmas Day as the sun sets and they sit down for a hearty Christmas dinner. On the other hand some nefarious figures look upon Christmas night as Dark Christmas Eve. These Dark Pagans, Demonic Worshipers, and entities of evil decorate their upside down black Christmas tree with a Demon statue on top in anticipation of a momentous event of evil. For upon that night one of the most evil and powerful entities on Earth will visit them to imbue them with dark powers, grant evil wishes, or leave gifts of thanks for the evil they perpetuate in their lives. This entity is known as the Anti-Claus whose full name is Claudius Claus. Usually called Claude Claus since the 17th century. He is in fact the long lost evil twin brother of Santa Claus who was given up not long after his birth. Unlike Santa he was raised by horrible abusive foster parents deep into the black arts. He did not know for a long time who his brother was but once he hooked up with powerful evil forces in the paranormal community, he learned who he really was and what his dark destiny would be.  Read The Rest Of The Dark Claus Tale Of Terror On Our Main Website… Okay maybe not for real but the video above is what would happen if any government got hold of Old Saint Nick.  Especially considering that Santa Claus is number one on the US Governments secret Supernatural Most Wanted List.  He’s on it merely because anyone with paranormal power is considered a threat to the government. After the interrogation there would be the harsh experimentation, and cold scientific study of Santa to discover the secret of his powers. Of course we know he’s a powerful Human-Angel Hybrid.  In order to capture him they would need to employ a virtual armada of supernatural beings, and most likely enlist the aid of the Anti-Claus.  The Anti-Claus is Santa’s evil twin brother, and a Human-Demon Hybrid.  However that isn’t likely since he’s number four on the governments Paranormal Most Wanted List. It’s only plausible if they managed to capture the Dark Claus, and then struck a deal with him if he helped them capture Santa Claus.

Thankfully this scenario is beyond ludicrous when you consider that a Demi-Angel like Santa Claus is a virtual God.  Not to mention that North Pole City is the most impenetrable metaphysical fortress on Earth!  They would most certainly have to acquire the “Claus Asset” while he’s away from the North Pole. Perhaps while delivering presents on Christmas Eve. Even if they captured Santa, and were able to suppress his Angel half thereby greatly weakening him, it’s a fair bet Heavenly Angelic forces would intervene!

Do Vampires Have To Truthfully Answer As To Their Supernatural Status? Most people know about the Global Invitation Spell that requires Vampires to be invited in ones home otherwise they are supernaturally denied access.  A lesser known paranormal requirement is that a vampire must truthfully tell you they’re a vampire if you actually ask them.  If you directly ask them they can’t laugh it off, or make some excuse up.  They must admit they’re a vampire.  However they can hypnotize you into forgetting you ever found out.  Hopefully though someone smart enough to ask would realize that hypnosis is a real possibility, and they should have Holy Artifacts, or other countermeasures, in place to prevent this.  Certainly a vampire could easily eliminate you on the spot.  Luckily there is a small window of opportunity where a small thread of Angelic restraint halts that instinct via the Truth Curse.

This revelation requirement isn’t caused by a spell but rather an Angelic curse on anything that’s a good chunk demonic, and sapient in nature.  This means a Demon, or DemiDemon must also truthfully reply to your question as to the nature of their identity.  Although Demi-Demons are often mixed up with Demons, and Vampires so they can deny who they are if you ask the wrong question.  Even the Devil himself must admit his identity if you guess correctly. He must respond truthfully to both questions as to whether he’s the Devil, and a Demon. Just as the most infamous Demidemon, The Anti-Claus, must respond to either being a Demidemon or The Anticlaus. This could be a problem for the prophesied dark leader of the future world known as The Anti-Christ, aka the Devil’s son. If asked point blank on live television as to whether he’s the Anti-Christ he will be forced to respond! Unfortunately a State controlled mainstream media will probably prevent that from happening. Apparently Dhamphirs, aka Demi-Vampires, don’t have to answer truthfully. It could be they don’t meet the minimum demonic DNA threshold.

Heaven.  Archangels cursed them, and their lineage for the unholy defiance they displayed.  The real complete curse was actually the creation of the Demon to prevent the dark Angels from maintaining their glorified nature, and full array of paranormal powers.  The Truth Curse extends to Demons, and Demi-Demons unable to lie if directly confronted with the truth on any subject.  There’s also no tricky word play in demonic contracts. What you see is what you get. This is why making a deal with the Devil or a Demon doesn’t generally result in unknown shocking surprises unlike being granted wishes from a Genie.  Genies love to warp wishes due to their anger of being locked in bottles, and lamps for eternity. Just remember deals with Demons usually mean selling your lower dimensional soul.  That’s why it’s very important for people to ask a plethora of questions before making a deal with the Devil.  And always read the fine print on your blood contracts! Unfortunately the complete truth curse doesn’t apply to vampires or lower demonic entities.